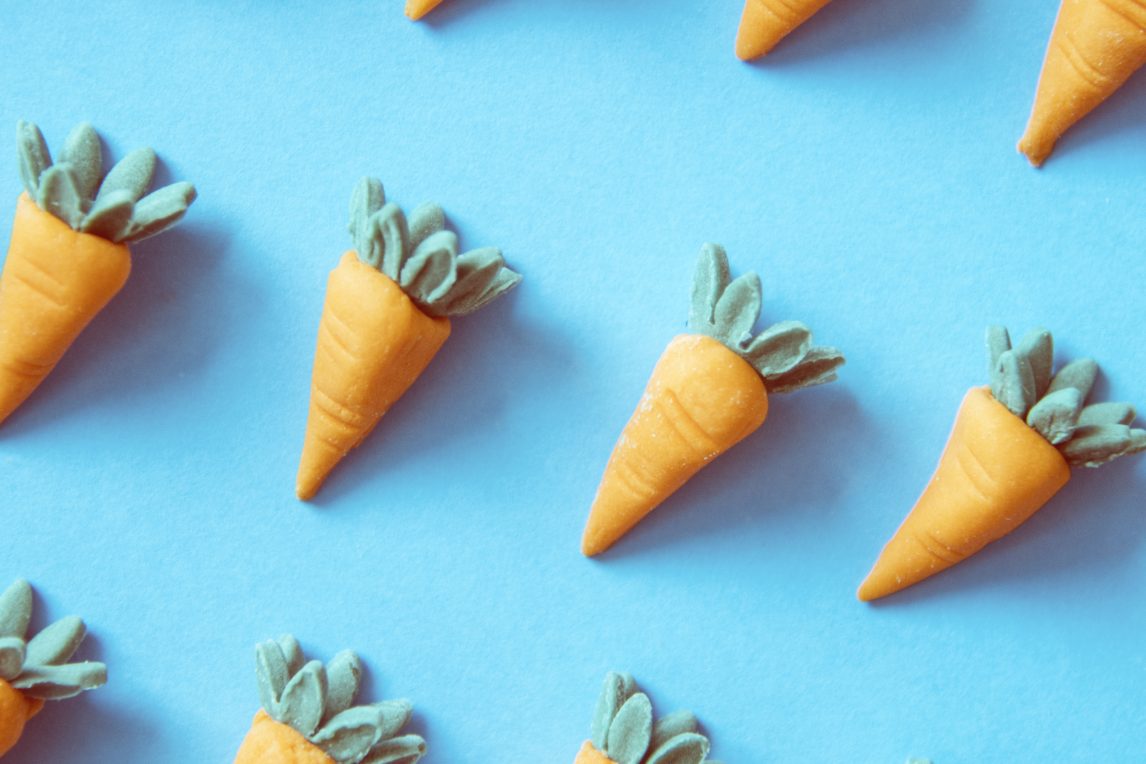 [ This image is in the public domain. ]
Kimberly L. Robinson·
Short Fiction

She turned on the light and smiled. The magnifying lamp was new. It would allow her to do smaller and even more detailed work.

That’s what she wanted: smaller.

A pebble of clay rolled around in the warmth of her palm. A tiny indent was made at the top of the ball with a small tool. Then paint, vanish. Let it all dry.

She admired it on the tip of her finger, sitting proudly. It was the perfect representation of a blueberry of a size that a pixie would pick off the bush. She placed it on an artificial slab of toast that had been slathered with a drop of gel medium and resin to look like cream cheese. The blueberry nestled next to the strawberries she’d made an hour ago, each one dimpled carefully, each seed painted black.

She sat back on her heels. It was the perfect little breakfast. It was about an inch in size.

She reached for the clay again to make something else.

She was on time to the restaurant but, of course, her mother looked down at her watch and frowned as if she were late. On time, to the mother, was always two hours early.

They were there to discuss the upcoming wedding of Big Sister. All of the aunts were also there. Of course.

The aunts helpfully informed her that, while they were waiting for her — she hadn’t been late! — they had all discussed but then discarded the idea of sleeveless dresses for the bridesmaids.

She said nothing. Determinedly. The silence hung in the air, like a wet cloud, and lingered.

First Aunt finally pointed out, because she thought it needed to be said, “A dress like that wouldn’t do you any favors.”

Second Aunt touched her shoulder and spoke in a gentler voice. “You want the pictures to be nice.”

“Pictures last forever,” First Aunt asserted, just in case anyone was unclear about that.

Her sister’s expression was as calm as an undisturbed lake. She didn’t care what the bridesmaids wore. It wasn’t her problem because it wasn’t her wedding. Big Sister had always known that the day would never really belong to her — only to the aunts and only to the mother.

A waiter appeared at their elbows.

The best thing about brunch in a restaurant was ordering something you’d never bother to make for yourself. Eggs Benedict sounded dreamy and decadent.

“They have salads,” the mother’s lips snapped, like a purse clasp closing. The mother didn’t look up from the menu.

It was possible, she discovered, with liquid resin and a dab of yellow ink, to make an exact replica of a runny poached egg. She captured the moment the fork pierces the white and the yolk tumbles out like sunshine.

This egg was the size of a button hole. Perfect.

She wondered, though. Could she get the next one a little smaller? She turned up the brightness of the lamp.

Most predators were safest after they were fed, but she knew that this was not the case with the aunts and the mother. The sheer mechanics of eating gave them something to do: fork to teeth, spoon to lips, dab with a napkin and then dab again. Now, though, there were only crumbs on the table and the plates were waiting to be cleared away. They quickly became restless for a target.

Second Aunt was sitting in the seat next to her. She turned her oval face up to her, quizzically. “Are you seeing anyone?”

Second Aunt smiled in a placating fashion when she saw her niece stiffen. Second Aunt liked to think of herself as the sensitive one among the aunts; she was the one who really cared about others’ feelings, after all. “I’m only asking because of the guest list, dear. We just need to know if you will be bringing someone.”

The reality was that she would — in a dress fitted with the longest sleeves in the history of tailoring, no doubt — be tending to Big Sister during the whole ceremony, not to mention before and after. It wouldn’t be fair to drag a date to all of that, to sit by himself in total isolation…even if she had someone to ask.

“It will be lonely for you when your sister is gone,” Second Aunt continued, as if Big Sister were traveling to the Moon and not just moving to a renovated one-bedroom in Williamsburg. “You should, at least, since you’re not seeing anyone, take up a satisfying hobby. Ah! Remember what you used to do when you were a kid? All those tiny, little things you used to make? So cute!”

“You should do that, again.”

Tiny slivers of clay, coiled and curled to look like croissants, the details so fine but barely visible. Green peas the size of specks of pepper. Microscopic cubes of glistening jelly.

She knew, as many did not, that miniatures had not started in the Baroque period in Europe. As with so many things, the Europeans came to the art of miniature late. The brown peoples and the black peoples of the world first did it: in Egypt, back in the Old Kingdom, in Mesopotamia and in pre-Columbian America. The miniatures were not children’s playthings to adorn tiny dollhouses — not back then. They were small offerings to the gods. A representation of what you wanted…or a representation of what you couldn’t have and needed the strength to endure. When you can’t control the world, you control what you can. And, you make it with your hands.

Briefly, on the third day, she wondered when she’d last had some water. She was, truthfully, a little parched. But, then, she imagined that she might be able to make very tiny mango slices that could tempt a Lilliputian and she kept on.

It was Big Sister who had the spare key. But, the mother had blustered past the confused building super and taken away the key. So, the mother was the one who entered first.

“My God,” the mother said. Then, she screamed.

Big Sister peered over her shoulder. She saw into the apartment. “My God,” Big Sister repeated, with tears in her voice. “Oh — oh, my God!”

All of the tables and all of the chairs, the windowsills, the kitchen counters, the sofa and all the many rugs were dotted with tiny perfect little feasts. There were lunches, dinners, breakfasts and full banquets. There were meals for celebrations and there were casual snacks. There was even an ethereally lovely, but infinitesimally small, wedding cake. It was all perfect and tiny and frozen in time, forever. Incorruptible.

She was crumpled up, in the middle of the room, like a bunch of twigs that had been gathered up and then carelessly tossed down. But, despite everything, she was smiling. One arm, her left arm, was outstretched. The tip of her forefinger seemed to point at something she was pleased with in her final moments, but they couldn’t see what it was. It was too small to see.