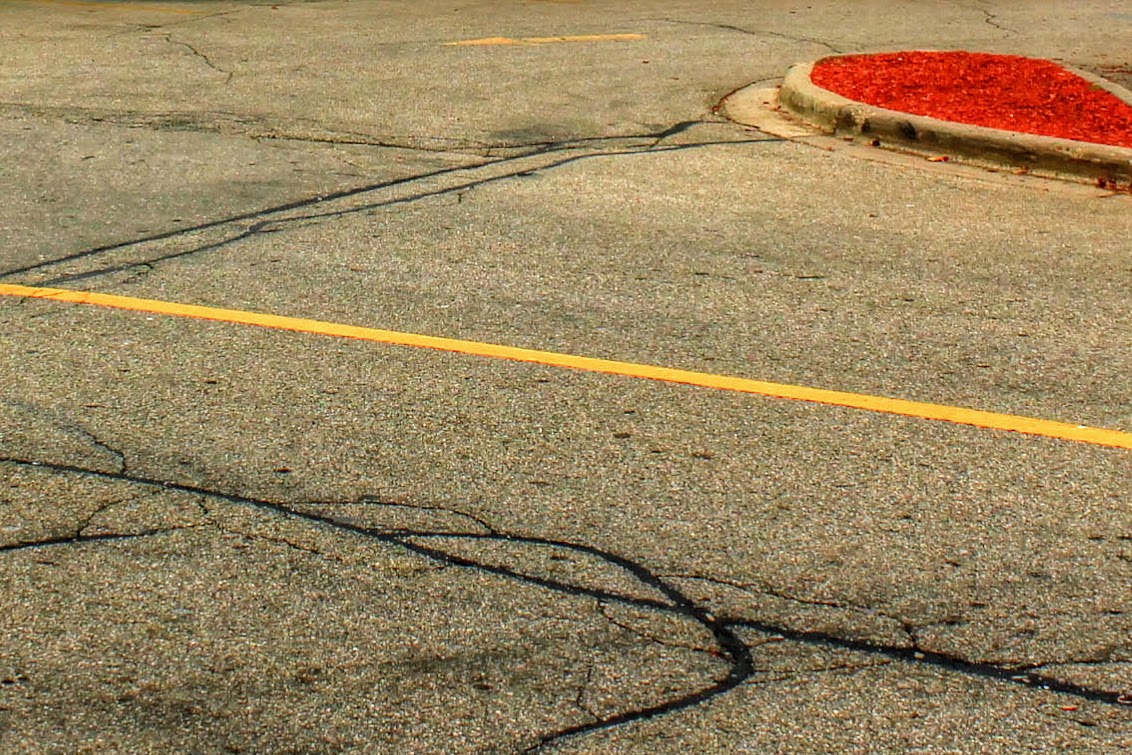 [ This image is in the public domain. ]
Rachel Snyder·
Short Fiction

She never had expected the bottom to drop out so precipitously.

There was wine in the air, peeking out from above the rafters of her soul, and she slowly, deliberately, let it slide down her gullet in one salubrious gulp. She paused for nothing, as she never had paused. There was sunlight washing alongside the adobe walls and when she took the time to watch its meandering progress, she was startled by her own affectations.

It’s not as though the produce man at the market had insufficiently warned her. He had sliced the pomegranate with a scimitar of miniature proportion and offered her the tastiest bite. The blood of the fruit dripped languidly onto the concrete, rivuleted its way toward the parking lot, destined by some innate call to puddle and pool beside the tires of the Volkswagen Jetta resting in the dappled sun.

Sunlight was everywhere. It curled around the stop sign at the corner, crested above the neon sign with the deadened “O” and slipped beneath the arms of too-thin women whose estrogen depletion played across their sunscreened faces. In one second, one palpitating moment of introspection, she glimpsed the shimmer of her own eternity. It was not what she expected it would be. No sparkling appendages glinted in prosaic array. A mere hint of other worldiness wafted, tangoing in the canyons of her nostils, and for one short moment she was struck by the inanity of it all.

Had this been night, surely a ripening crescent would have heralded the moon’s impending arrival. Had this been winter, snow would cotton the sky and gather to kibitz in sooted alleyways made dank by indecision. Autumnally, the calendar would have given itself over to the sweet release of leaves in rampant surrender.

But this was none of that. This was summer, the month of the eclipsial triad, of ducks in heat, of spontaneous whitewashings and upheaved civilities. The ravings of malcontents cluttered the airways of angelics struggling to breathe free. One need only peer into the eyes of every third person to determine the square root of unspirited, desolate existence.

“Absolutely not,” slingshotted the retort.

“Nothing for me,” she muttered. “Nothing. Not for me. No thanks.”

In retrospect, it would be imagined that she snapped in the sharp arc of a rubber-banded implosion. Those with neither the wisdom nor eligibility to make such a pronouncement would hypothesize with a broad stroke stippled nervously on outsized projection screens.

None of them would have come close. The anticipation of fragmentation clouded far too many. For most, the gateway to the sanctum of divine deliverance was locked and rusted shut. The maps had all been burned and the keys that once dangled from the heartstrings of the living were out of sight, cavorting with misplaced reading glasses, lists of homeopathic supplements fallen to the floor at the natural grocery, and condoms that were never where they should be when they should be, ought to be, should have been.

She was one of the few who knew. Maybe the only one. Trouble was, she wasn’t about to spill the beatitudinal beans.

Within her, genius and madness stoked the twin fires. She winched the tightrope as she traversed the ever-changing line of demarcation. Following the tautological imperative, she tightened, she tautened. She loosened, she slackened. She moved forward, she regressed.

Rarely did she work with a net, and why would she?

In the absence of safety, her options continually widened. (1) If she fell, she would rise again. (2) If she stumbled, foot-faulted, she would undulate wildly until she regained her balance and reinstated a functional fulcrum. (3) She would maintain her hold by a hangnail’s breadth until she was carried aloft by flocks of winged beings. (4) Worst-case scenario, she would plummet to the unforgiving landscape below, then return gingerly to (1).

In the absence of judgment, every possibility was plausible.

Her journey was not a spectator sport, though onlookers were strangely drawn to observe and take liberties with snarky potshots and rapt wonderment. They eyed and needled her in the same way the tailor measures your crotch while he tongue-rolls chalk between his lips.

Before she declared an end to the never-ending drought, rain took up residence in the folds that surrounded her eyelids. Every blink produced a downpour, which in turn gave rise to the kind of condensation normally reserved for corked bottles and the organically-grown raspberry vinegar they contained. Her living waters seeded the heavens and restarted the cycle anew. Stopping was not an option, leading her to surmise that opting in was truly no different than opting out, and in fact, might lead to indistinguishable outcomes.

While she waited for the light to change, she manipulated the intersection in her mind — flipping over Subarus and SmartCars so that they shimmied and swiveled on their roofs like manic roly-polies. While green conspired to overtake red, she introduced theories of relativity to absolute zero, then waited while the whirling gently slowed. The bulbs glowed with the green of leaves vowed never to grow old, leaving her to call the game on account of unfulfilled desires.

“Excuse me, if you please,” she said to the dowager shuffling just outside the pedestrian crossing lines.

The crone halted, raised her twigged hand to her heart as she muttered “You don’t belong here,” in the direction of the pavement. Her disillusionment with the season was woven into the thrummed scarf wound snugly about her neck. An air of disorganization enveloped her wizened form. “No anointing for ones such as you.”

The street-crosser swung outside the margins, as she was wont to do, circumventing the grey shroud that circled the turkeynecked woman with hair of dulled aluminum. She cast not one glance behind her, placing her words into the energetic blossoming rose suspended seven inches ahead of her sternum.

“Caution, my dear, don’t act in haste, or sure as gold, you’ll lose this race.”

Truly, there was little she could do to stem the onslaught.

Romps through the layered phyllo dough of multidimensionality punctuated her days and washed over her nights. She carried a satchel of knowing glances and on occasion, thin tissues of incandescent wisdom fluttered out.

Few knew. She contained and maintained with a precision usually earmarked for metronomic devices, though she would be the first to allow that twittering nabobs oft imperiled her equipoise. She was especially vulnerable to lumpy pre-diabetics who stocked the grocery store shelves near the turns of sunrise and sunset. Drawn by the diligence with which they aligned small jars of marinated artichoke hearts and air-plumped bags of baked (not fried) potato chips, the frisson of recognition faded upon her attempts to invoke meaningful interaction.

“I’m looking for the gluten-free pasta” was more often than not met with something akin to “The whole wheat is over there” plus a Queen Elizabeth wave.

“Yes, but that’s got gluten in it,” she attempted, smiling.

“Maybe over in the dairy case.”

“You’ll have to go to customer service.”

It was in the midst of just this type of interchange that she would feel an overwhelming desire to shed her shoes and rejoin her compatriots whose days were unmarked by flickering neurons seeking to bring rational order to mentally induced unruliness.

Truth be told, she never had an aptitude for the asinine.

These were the moments that tested her, along with the ringing phones that invariably interrupted her forays into lush Amazonian rainforests of consciousness and unified fields expanded far beyond the theoretical. In this petri dish of unbridled creation she felt herself in the bosom of all that expressed itself as home and family, and these sallies offered a staggering peace.

Yet with increasing frequency, these deep traversings were inevitably met with obstacles ranging from the merely annoying to those that arrived with a heinousness she could not easily shake. Attempts to round the Horn of Unlimited Potentiality or ford the Stream of Conscious Awakening floundered, though neither for lack of intent nor passion.

More likely, she would find herself flapping about in a well-wielded net of fuzzy indecision, reined in by a ravaging bolt of energy undetected by her internal bullshit monitor or worse yet, unchecked by her usual capacities to hold such things at bay. Unsurprisingly, she was known to mount her own strikes of pre-emptive judgment, though scant benefit ever came of that.

Nonetheless, she soldiered on, unwilling to forego the lure of reciprocity and the nonchalance of karma whose expiration date had come and gone all too quickly.

Had she been born a window, she would have been predestined to shatter the oldschool way, leaving haphazard piles of slender triangulated shards edged in jagged origami glassiness. Errant Romeos would surely have tossed gemstones against her clear skin, never knowing the fragility that rested beneath her crystalline clarity. Raindrops would have repeatedly thrust themselves upon her surface in a pounding attempt to gain entry, unmindful that not one, not two, but three impenetrable layers separated them from their intended destination.

And the hail, never mind the clattering hail, whose rambunctious potency belied its genetic ephemerality and never reached the golf course intact.

She repeatedly shifted her unblocked gaze, scrutinizing all that lay within and without, gifting herself an unparallelled panoramic view. She looked, she saw, she averted her gaze when the sightings proved unbearable, rapid-processing her observations with a keen clicking shutter. On occasion, she inched her way upwards and placed her face in the midst of it all.

It was never enough for her simply to watch the parade. She had no interest in sitting atop the peeled Cadillac or peering through the bulletproofed glass at a swarming mass of men, women and children, fingers and shirtfronts glazed with the drippings of caramelized popcorn.

She did not sit well with herself, nor for that matter, with others.

Had she been born a door, her hinges would eventually have cringed under the stress of recurrent openings and closings. She would fling wide open, jambs akimbo, stretching to points of no return, until some westerly wind reared its snorting swiveling head and advanced its flanks toward sudden closure.

Sometimes, she just could not budge herself. She would approach time and again the tinman, whose oilcan, if she could pry it from his paralytic limbs, was invariably empty. Doors are not easily opened when you are the door, the catch, the lock, the arms, the aperture. And true that, after the first time, the hundredth time, nothing ever sits squarely as it did before.

But of course she knew all that in some oddly non-intellectual fashion. She was, after all, fully sentient and perspicacious to a fault. The wind blew, the doors swung, the windows rattled, and inside, an unbridled stasis prevailed.

Had she been born a single-celled flagellate, she may have possessed a strikingly different view of the world, and of her singular place within it. But she wasn’t, was she, and this she knew surely as if she had never been born at all.