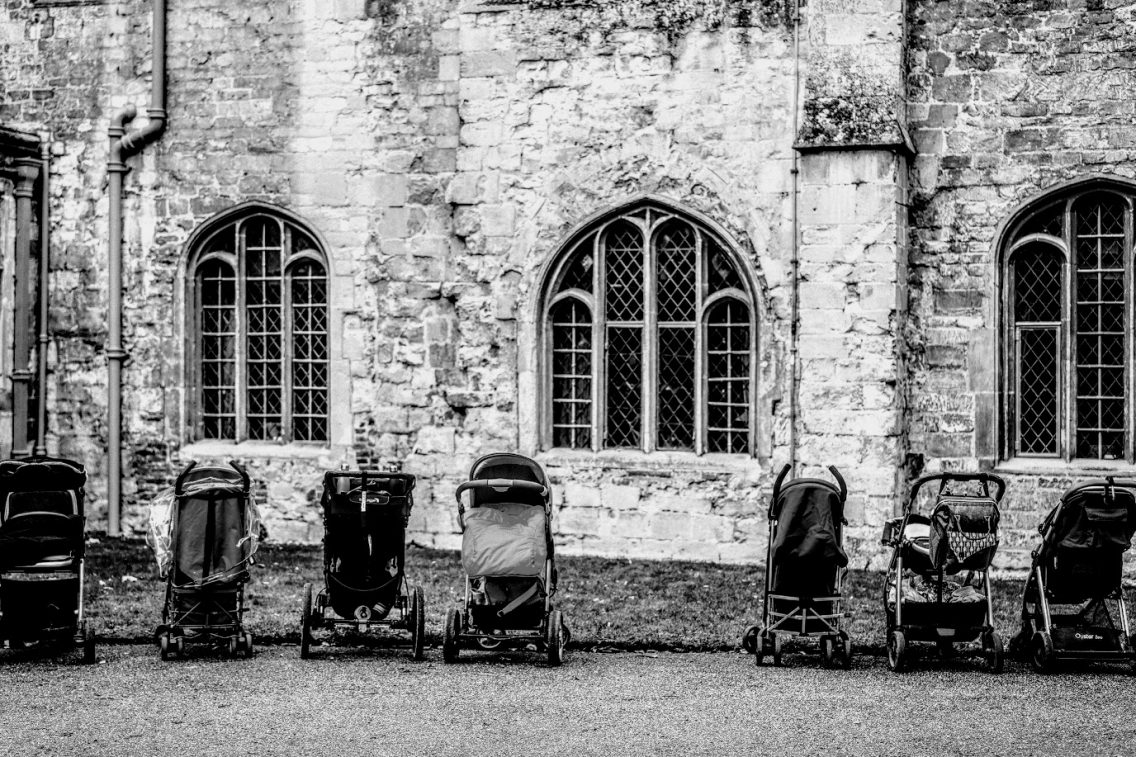 [ This image is in the public domain. ]
Cassandra Spiss·
Short Fiction

All the mothers had babies. All the mothers had tired eyes and aching backs. They walked separately, but strangely together, like a quiet army, pushing strollers down long bumpy streets. They walked through sunsets and sometimes sunrises, trying to settle crying children whose noses were wet with frustration. The mothers kissed their babies’ warm little heads and let the babies bite them until they bled. They held them in their arms until they went numb, until at last the babies fell asleep, rocking them softly like little ships out at sea.

Each one of them was different but they were all bound together by the underbelly of love and in some way it made them whole, as if each soft lullaby they sang was born of the same lips. They looked forward to Tuesdays because even though they were tired, on Tuesdays they had each other. They laughed about their careless husbands, they talked about the crazy music teacher who sang to herself when no one was there, they sometimes even cried about the things they had lost even though they were so grateful, they always reminded each other, for the things they had gained. And as they bounced their babies on their knees and laughed at each other’s stories they felt, at least for a short time, like the world was easy.

It was like this every Tuesday, except one Tuesday when Lily brought her friend, Sam, who was in town from Michigan. All the mothers met at Lily’s apartment and everyone came, including this new Sam, except Allana. At first, the mothers didn’t notice that Allana hadn’t arrived. After all, being late was nothing to a group of mothers, and they were distracted by Sam and her swollen belly which they all told her was just the perfect size for five months.

“What are you having?” they asked her as they offered her coffee and felt her stomach for little kicks.

“I’m not finding out, but a tea reader told me it’s a girl,” Sam laughed, with the faintest edge of hope in her voice.

Finally, after thirty minutes, Amanda said, “Has anyone spoken to Allana today?”

No one had. It was strange, they all agreed, but she had probably gotten caught up in something, or forgotten, or maybe she had lost her phone. It was nothing surely, and so they went on laughing and talking while their babies rolled around on the floor like little marbles stuck inside a plexiglass maze.

When Tuesday was finished and Wednesday came, none of the mothers had heard from Allana. They all texted with each other and this time agreed, that it was strange not to have heard from her. At this point they grew a little bit worried and decided that whoever heard from her first should text the group and let them all know she was okay. But as they went about from one activity to the next, heaving strollers from the library to the grocery store to the playground, they still had no word from Allana. It was finally Meredith who agreed that she would go by her building and see if the doorman had seen her.

Meredith struggled to get the wheels of her stroller up the three tiny steps that separated the foyer from the front desk of Allana’s building, but she managed to do it without waking her delicate little baby. She smiled at the doorman expecting him to in some way acknowledge her small victory, but he offered nothing.

“Hello,” she said quietly so as not to wake the baby. “I’m a friend of Allana’s and I was wondering if you could buzz up to her apartment for me.”

“Is she expecting you?” he asked.

“I’m sorry,” the doorman said, “but Allana isn’t in, she left the building about an hour ago.”

“Oh, okay, that’s great. I mean that she’s around. Can you tell her I stopped by? Actually, better, can I leave a note?”

Meredith felt a sigh of relief. She immediately texted the group and wrote, “Good news, she wasn’t in, but her doorman saw her an hour ago and she’s out running an errand.”

The group expected a text from Allana later that day, they were even willing to accept the possibility of end of week, but nothing came. It was like she had simply disappeared. And yet she hadn’t. They knew of other moms who had seen her at the playground, or the library and sometimes on quiet evenings, they even thought they had caught a glimpse of her back as she rounded the corner, but it was always someone else. The mothers continued to meet on Tuesdays although it didn’t really feel the same. Things felt fragile, as though at any moment anything could break.

Weeks passed, and then months. The air turned sharply toward fall and the ginkgo trees started to shed their fleshy fruit. You couldn’t walk anywhere without the stench of smashed ginkgos, broken under the weight of countless baby strollers and dragged through the streets like a medieval massacre. The library, the playground, everywhere you went the smell of rotten cheese lingered in the air. On the last Tuesday gathering in November, the mothers heard the news that Sam had her baby. A boy.

After that, the Tuesday gatherings slowly drifted further apart. It became every other Tuesday and then every third, until it was every once in a while, if at all. The women still saw each other around the neighborhood and occasionally met up, but not with the same regularity as before.

And then, as if it were any other day, Rachel spotted Allana in the middle of the street talking to a friend. Her hair was darker and she seemed thinner in the face, but that wasn’t why Rachel had nearly not recognized her. It was the coffee in hand instead of the baby stroller that made her do a double take. She considered saying hello, but she couldn’t bring herself to cross the street and go through with it. Too much time had passed, too many unanswered questions stained the ease of dialogue. The air cut across Rachel’s back as if beckoning her to move on. She used the momentum of its weight to help push her stroller toward the corner and walked on, safely on the other side of the street. She heard the sharp scream of her baby, awoken by the bitter breeze. “Shhh…” she urged. “We’re almost home.”