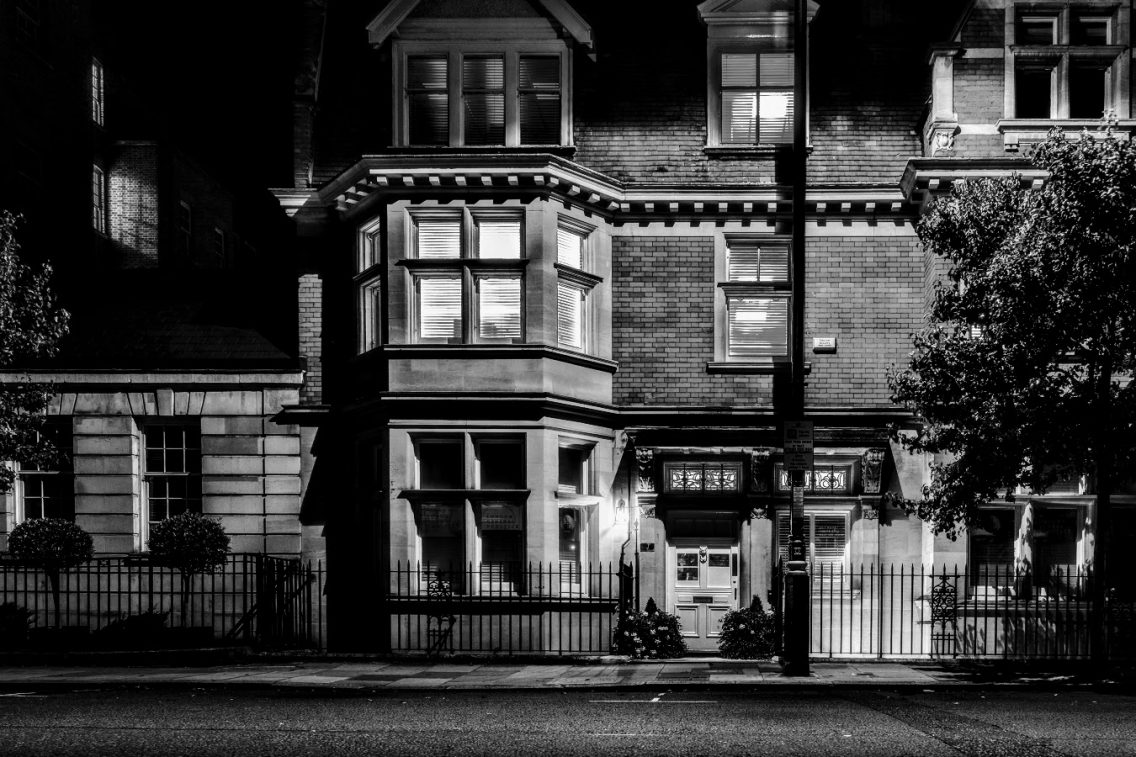 [ This image is in the public domain. ]
Amy Arora·
Short Fiction

A Study in Love

She had been dreaming of her sofa since leaving the house that morning. It had only just arrived. It was L-shaped, wedged into the corner of the finished living room, and cream: completely impractical but just the thing for the London couple about town. It had been her choice and he had acquiesced without much persuasion. She still felt a little guilty about getting her way. When she clicked ‘Pay’ at the checkout, she had imagined herself in silk pyjamas, a glass of red in hand, reading a book of poetry, just so. At the end of this particular day, her vision was quite different. She wanted to take off her bra and lie on the sofa in the dark, watch some high-quality trash and make her way through a bowl of bacon-flavoured crisps.

Unfortunately, neither expectation nor reality was possible for several reasons. The first was that at this moment her house was awash with workmen and construction workers. Six men of varying friendliness could be found dispersed throughout the townhouse. Her favourite was Mark, the apprentice, who was seventeen and who always sought her out especially to say thank you for the tea and the biscuits. The leader of the merry band had never actually introduced himself to her, so she thought of him simply as ‘the boss’ and deferred to him accordingly. He was tall, skin and wire, and his clothes, the choice of a much younger man, suited him. Crisp white t-shirts and expertly ironed jeans which somehow always looked pristine no matter how dusty the work or how sweaty the season. She found him interesting but she didn’t know why. When talking to her, he made unnerving eye contact and explained everything in a slow, rumbling voice, with a strong West Country accent which had not succumbed to the pressure of London.

The other reason why she could not repose on the sofa, braless with crisps, as desired, was that her husband would be home soon. She ran through her mental checklist quickly: brush hair, open wine, re-apply mascara, order dinner, locate the newspapers, get rid of the builders, press play on something classical, and wait, serene, postured upright, for her love. It was exhausting. They had been married for six months and she had gone through this ritual every evening, as they refurbished the house to suit their shared tastes and to banish the memory of his ex-wife, who lived with the teenage children in the luxury of alimony across town. She was quite scared of the ex-wife. She was reminded often that she was not the first love of his life, but the second. Perhaps in fifteen years he would discard her too. That thought made her want to howl.

It was not just that she loved him, but that she loved him to the exclusion of everything else. She had become shrunken and submissive, a shadow compared to the glittering person she was before, but she had never been happier in her life. Sometimes she wished she could be both: happy and herself, but it seemed the ultimate contentment for her lay in someone else taking the lead. It went against everything she had been taught, by her mother, by society, by post-feminist culture—but love was about compromises, wasn’t it? She paused to apply mascara, open-mouthed, and thought again of the boss. Another man in control of his destiny but warmer and more real than her nonchalant husband. She tried to picture him at the weekend, in tracksuit bottoms lying on a sofa just like theirs, although perhaps less cream, and she found that she couldn’t. He only existed here.

He paused on the top step to pull his keys from his briefcase. The keyring had been a gift from his daughter, many years ago, and it was the only element of whimsy which he carried with him: a small panda who wore a tiny hat on which the words ‘I’ve been to London Zoo’ were printed. He loved those gifts from when his children were young. The presents they gave were the things they wanted for themselves and as it turned out, he wanted them too, because he wanted to be a part of everything that his children thought or did or said. Everything else about him was order. He was the definition of tailored. He had a large, designer wardrobe in the spare bedroom and the only clothes in it were suits. To lounge, he took off his tie and rolled up his sleeves.

He was about fifty but he could have passed for thirty-five. His wife, who was in her mid-twenties, had been shocked when he had revealed his age, at their third clandestine meeting, in the type of hotel where the windows didn’t open. She was all energy, like a spitfire assaulting the sky, and he kept up with her admirably throughout their six-month affair. Now, half a year into marriage, both were a little depleted and they sometimes ran out of things to say. He hoped that the lull was only temporary and that they would settle into a life of both passion and ease. This—whatever this was—was not quite what he had expected.

He knew exactly where his wife would be when he pushed open the door. She would be sitting—waiting—on the sofa, looking beautiful, ready to hand him a glass of wine. She was really very beautiful. There was plenty that was interesting about her too: a lucrative job at a marketing firm, a passion for books, and, before, a reserve which was not coldness but was not warmth and which had nothing to do with sex. When they had met, he had been intoxicated with her and had succumbed completely to all the clichés of a mid-life crisis. He spent more time in the gym and bought an expensive and unnecessary car. He had literally traded in his wife for the younger model. Among his peers, there was a grudging respect. The women in his family were furious. He wasn’t sure whether his sister or daughter would ever speak to him again. His ex-wife had been brisk, brusque and betrayed. The look on her face when he told her about the affair sometimes swam before his eyes at inopportune moments, like just before a meeting at work or in the shower after he had fucked his new wife.

He had momentarily forgotten about the chaos in the house until he entered and saw the dust sheets on the stairs. These builders were efficient, not like those cowboys who had done up his house the first time. He suspected that this mostly came down to their leader, a man whose name he had instantly forgotten, having dealt mostly with the contractor. He was a soft man although he was entirely masculine, and he led them through this refurbishment process with care. His wife called the lead builder ‘the boss’ and this name suited him because he exuded authority without being at all intimidating. If the boss was a little gruff sometimes, it didn’t bother him much. He liked that his home was in the hands of a true professional. He liked, also, the unflinching eye contact of the boss which gave him a sense of certainty in this life, where he sometimes felt like he was driving on the motorway at top speed and could not remember the last fifteen miles.

The boss, who would have been perplexed if he known this nickname, stood opposite the house and watched the husband pause on top of the stairs. I am right here, he wanted to say. I am here and I understand you, I see you. The man did not turn and he sighed and walked away, the hopelessness pressing on him like a weight.

He had met the wife first, four months ago, and he now thought of her as a candle which was slowly going out. She had been cheerful enough, in giddy excitement about all the changes she was going to make, and just a little too determined. Each day since she had looked a little more haunted and she smiled, but not with much conviction. When she offered them all tea and coffee, she served it with the robustness of a 1950s housewife. He knew she worked too and he often wondered how she kept all of the plates spinning, but also why she found it all so difficult. Didn’t she have it all, after all?

Things had been quite different when he had met him, the husband. The boss had been drinking tea with the wife in the kitchen when the husband had strolled in, nonchalant, trailing a hand across his wife’s back and pouring himself a coffee. Before a word had been spoken, he, the boss, had felt his breath catch in his throat and a gospel voice in his mind had half-sung, half-shouted, “At last!” Here was the person he had waited for all his life, for fifty-eight years, when no one else would do, when many had tried and failed, just when he had resigned himself to solitude and started to feel fine with it. When the husband spoke, he had stared at him and had only kept hold of his own words by talking with precision. The woman might as well have been a piece of furniture. He could not take his eyes from the man. Here was understanding at long last.

He now knew that he had never really been in love before. He had no idea why his heart had settled on this person, who was not even free to love, and who saw him as an employee before he saw him as a human. At best their relationship was transactional. He didn’t even know the man and the differences between them suggested that, all else aside, they might not have had much in common anyway. But, yet, however… there it was.

This had been the worst four months of his life. He imagined himself on a sand island, under a burning sun, surrounded by shark-infested waters, with no wood for a boat. At meals with friends, they had asked what was wrong. Was he feeling well? He was losing weight and he couldn’t follow conversations. He had started to live for those days when the husband finished work early and he could see him, if only for a minute, to update him on the progress of the construction, and to chastise himself for his sweaty palms and beating heart. If the woman was a dying flame, he was an inferno and his body screamed at him, both ‘danger’ and ‘don’t stop’ at the same time.

It was ridiculous to feel this way about someone he had never even touched. He knew that he could never tell anyone. He remembered the intensity of teenage infatuations and thought that they paled into insignificance compared to this. It was too much. He stopped abruptly, unable to go on, and sat down in the kerb, like love’s beggar, thankful for the dark and empty street. If anyone had passed at that moment, they would have been surprised to see this man, whose back and shoulders were so straight and square, weeping with abandon. He thought of all the poets of the past who had shed tears for love and knew that he was more sincere. He counted in his mind: just fourteen hours until he could see his love again. Composing himself, he stood, and began the long journey home.