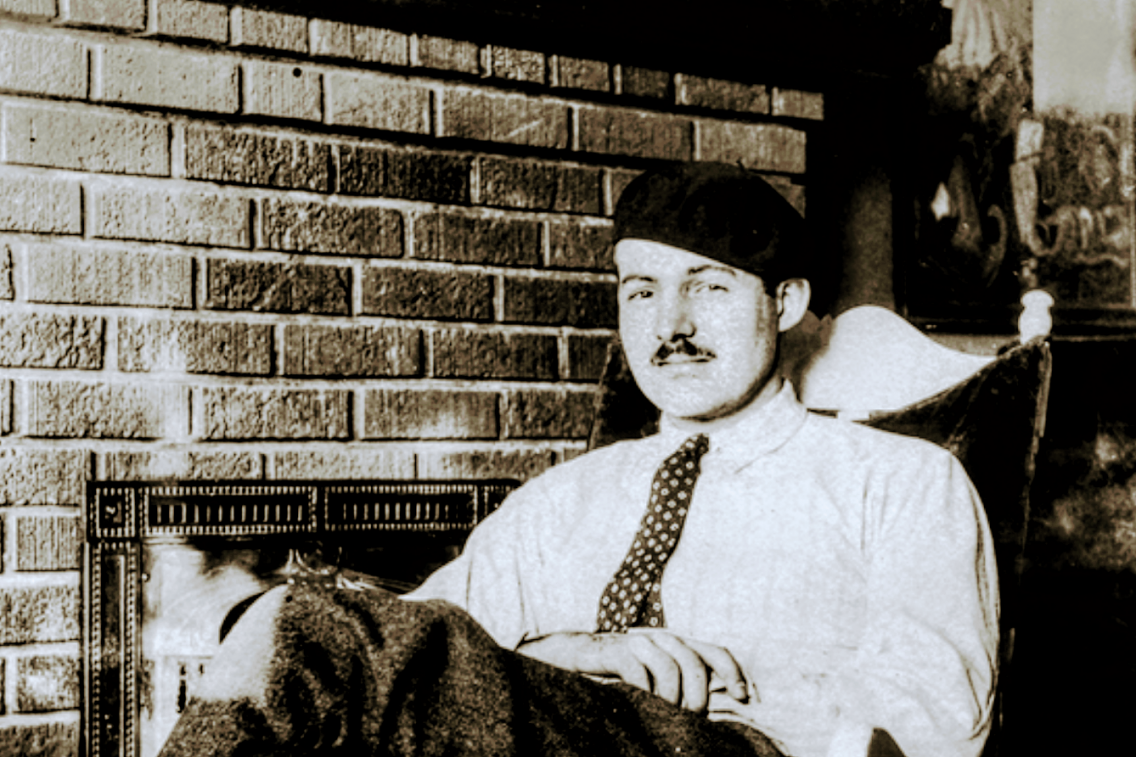 [ This image is in the public domain. ]
Timothy Grinder·
Short Fiction

Two days ago, I decided to steal one of Hemingway’s cats.

When my wife and I visited Key West years ago, we took a tour of the Ernest Hemingway Home on Whitehead Street in the Old Town. Hemingway lived there in the 1930s when he wrote “The Short Happy Life of Francis Macomber,” a fine story about hunting in Africa, although the story has a tragic ending. The house has been preserved and it remains as it was when Hemingway and Pauline Pfeiffer were going about their business in Key West. Occasionally, during the tour, I thought that at any minute Hemingway might walk through the door, drunk as can be, and try to start a fight.

As we walked through Hemingway’s bedroom on the second floor, I saw one of his famous six-toed cats sleeping on the marital bed. The cat looked as if he had been there, undisturbed, since 1936 when all Hemingway could think about were the good old days in Montparnasse, the boyish Pauline Pfeiffer, and giant kudu horns. Outside the house, in the gardens and surrounding the pool, more cats lay about, many with six toes, demonstrating with languor and supine disregard their supreme ownership of the house and all it contained. They had been here for generations, somehow endowed with special powers that made them magisterial, unconquerable, and eternal. Hemingway had felt that and when we visited a few years ago, so did I.

The day before yesterday, I decided to steal one. Before then, I had never considered stealing anything from Hemingway, but I had a change of mind.

I booked a flight that left early the next day.

Before sunrise, I packed a bag with underwear, a shirt, a toothbrush and a tube of toothpaste, blood pressure medication, a comb, deodorant, a bottle of ibuprofen, a copy of To Have and Have Not, a phone charger, and prescription sunglasses. I took nothing else. I wore shorts, sandals, a polo-style short-sleeved shirt, and prescription glasses. In my pockets I put my phone, keys, cash, and my wallet with credit cards and identification.

I put the bag in the car. I went into the house and picked up the cat carrier sitting next to the front door where my wife had left it. As I was about to leave, the bedroom door opened and my wife, still sleepy, said, “Where are you going?”

“Why do you have the cat carrier?” she asked.

“Okay,” she said and gave me a long look. After several moments, during which I stood at the door with the cat carrier in hand, she said, “Well, watch your toes.” Her compassionate distrust, which she had displayed more than once during our marriage, allowed abundant tolerance of my ill-conceived actions.

I drove to the airport and got on the plane and flew to Miami. I rented a car and drove south on the Overseas Highway, passing azure seas and palm trees and beaches and conch restaurants and T-shirt shops. Once, I stopped, for just fifteen minutes, to have a piece of Key Lime pie.

When I reached Marathon, I took a short walk on the now-closed old Seven Mile Bridge. I walked perhaps half a mile and leaned over the railing and looked down at the shimmering water a hundred feet below. I’m going to steal Hemingway’s cat, I thought, as I felt the heat of the sun on my head and shoulders and resisted the temptation to leap into the cooling sea. “He has plenty of them and he pays them no mind anymore,” I said to a brown pelican that passed just overhead as it flew along the length of the bridge toward Pigeon Key. Resolute now, I turned around and went back to my car.

I finished the the drive to Key West, arriving in early afternoon, and checked-in at my hotel. I took a nap in my room and then took the shuttle into the Old Town. I went to a local restaurant and had one of their nasty sandwiches and got drunk on some of their terrible rum drinks.

The next day I took a shower, brushed my teeth, took my blood pressure medication, and put on my clean underwear and my clean shirt. I checked-out and drove to Whitehead Street and found a parking space two blocks from the Hemingway Home. I transferred my bottle of blood pressure medication from my bag to the cat carrier, took it from the car and walked to the house.

I purchased a ticket and, as I was entering, an attendant said, “Sir, you can’t bring that in here.”

“What, this?” I said, lifting the cat carrier. “This has my medication in it. I have a heart condition and my doctor told me that if I’m without my medication for even a minute, I could die.” I smiled.

“No, it’s for my pills,” I said and opened the carrier and showed her the bottle of medication.

She let me in.

I made my way through the house to the backyard and pool. Papa had demanded that a fresh-water pool be hewn from solid coral. Several cats lurked there. I sat on the ground and a friendly six-toed tabby approached. I scratched her neck and back and behind her ears and said, “You’re quite a cat, Miss Hemingway, you’re certainly quite a cat.” She purred and I purred and we looked at each other and I said, “Well, that’s fine.” I stood up, my cat carrier empty, and left Hemingway’s house. When I reached my car, I set the carrier on the sidewalk and left it, a small gift memorializing my visit to Key West.

I drove up the Overseas Highway, returned the car to the rental place, boarded my flight and flew home. My bag now contained a dirty shirt and dirty underwear plus everything else I had brought with me. As far as I know, my blood pressure medication remains in the cat carrier on a sidewalk in Key West.

I went to the backyard and stood by a patch of freshly turned dirt, a nice spot between a stand of purple salvia festooned with blossoms that stretch toward the sky and an old moss-covered birdbath where chickadees and robins come to wash and enjoy a drink, the place where a few days earlier, in a hole I had dug with a rusty trowel and my bare hands, we had laid our stupid old cat whose soul had moved on.

My wife came outside and took my hand. We stood together silently, looking at the patch of dirt and listening to the birds warbling in the trees.

“Have you finished mowing the lawn?” she asked, after a long minute. She looked at me with her intimate and knowing way. And somehow her spirit crawled inside all the aching empty spots in my being until there was no emptiness left in me at all.

“You know, we can get another cat. Soon, if you want.”

“I tried that already, but it didn’t work out,” I said.

“Maybe we can try again together when the grass grows longer, when it’s time to mow it again. Maybe next time you’ll let me help?”