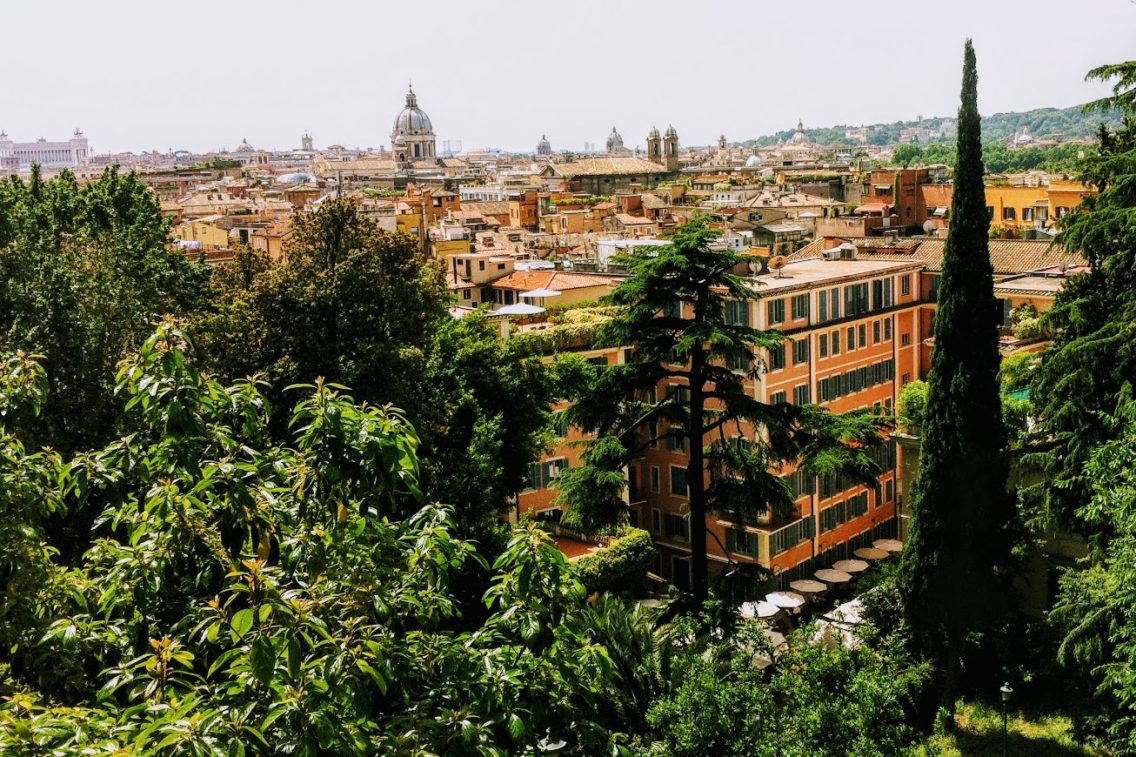 Ma said he’d fled into the umbrella pines, but Trini and her brothers agreed it was unlikely that Shelly the tortoise had unbolted the front door, scampered down the stairs, vaulted over the wall, and skipped over the railroad tracks to vanish into the Roman wilderness. It was unlikely but also something they hoped might have happened, that the tortoise was indeed munching on chicoria and sunning itself somewhere cageless out there. At the same time, neither Trini nor Gian nor Alex were immune from guilt – it was possible they’d left the cage door open. But it was interesting how the hamsters had escaped a few weeks earlier, and the budgies before that, for which the children were definitely not responsible – they’d still been at school then. Nothing came of their pondering the mystery.

Time passed, summer’s heat bloomed, and Fa brought home a white rabbit. ‘Let’s call it Alice,’ he said. The children hesitated to accept it. ‘How long until this one runs away?’

He assured them it would not but it did, and then Cesarina the neighbour appeared bearing the gift of a pot of coniglio alla cacciatora. She had a fine vegetable patch with neat rows of lettuces, onions and tomatoes, and also kept conigli for eating not petting, so no one in the family made the connection between the potted coniglio and Alice, although in hindsight they should have done. The family had thanked the neighbour and she’d offered the recipe that involved anchovies and white wine and black olives, but it soon became apparent that something was amiss because Ma was no longer on speaking terms with Cesarina. Fa promised the children a kitten.

They would have got one straight away had they not accompanied their father to the macelleria up the road, which gave the children the opportunity to see first-hand the skinned creatures hanging from hooks in the window, alternating naked rabbits and plucked chickens. Of course, you expect to find death in such a shop. The knives, for one thing, gleamed. For another, Sergio, the jolly butcher, wore a spattered apron. ‘Would you like to see something special?’ he asked, ushering them into the gelid marble-lined back room to inspect the massive half cow with its sober layers of fat and flesh and bone. They observed the crimson heart of the ribs sawn through, the dark satin liver in the hard steel pan, and they shivered.

‘I don’t want a kitten,’ Alex said, and Fa said not to be afraid, ‘It’s all right, it’s the circle of life.’ Trini replied it should really be called the triangle of death, there being so many more dead things at the base of the triangle compared to living things at the top. Eventually, however, they supposed that it would be okay to have a kitten, they’d care for it. Fa brought it home one day and the children played with it until it disappeared.

Ma found it in the garage. It had been there a while – Fa explained that the smell hadn’t been the drains after all – but its remains were discovered only after the home-made tomato preserve disaster, the garage having been used to store a multitude of pomodori rather than the family vehicle. ‘The fermentation made too much life in the jars,’ Ma said. Trouble was, when one jar went, it encouraged the rest, ‘A domino effect,’ Fa said, but it was actually more like a magnificent volcanic eruption. All in all, the children had a great time cleaning up the tomato sauce and broken glass, something different to do over the summer holidays. The family had planned two weeks at the beach, but they couldn’t go because Ma was expecting again, and travelling by any means made her sick as a dog. They stayed at home, with Ma lying down in her room while Fa planned lessons for his English school’s History Fourth Form and Latin Fifth Form, and the children amused themselves in the umbrella pine woods behind the railroad embankment.

The three of them rode there together on one bicycle, like a bad circus act tottering along the potholed shoulder of the busy Via Braccianese to where they could cross the train tracks. Sometimes they went as far as the languid building site of San Nicola, where so-called luxury villas were very gradually being erected. Occasionally, they’d search there for Shelly the tortoise, but they never did find him, only some fledglings fallen from their nests. On the sandy ground, among the bleached pine needles, the little blue wizened things quivered with hearts that beat through translucent skins, soon to be vanished by merciless ants.

At the building site another somnolent afternoon, the children stopped and listened at the disturbance in the air. Coming from the other side of the embankment, it could have been a mouth organ, poorly played. When Alex began to cry, Gian said, ‘Don’t be a baby,’ and dragged him and Trini toward the sound. They followed their ears to the tunnel under the tracks, a dark and oozing place. They hesitated but there was a light at the far end. Leaving their bike, slowly they entered, braving the mud squilching in their sandals, the cobwebs frushing across their faces, and the unseen scutterings in the gloom.

The air was bright and raw and loud when they emerged by the field, beyond which they discerned the familiar red roofs of the macelleria, the alimentari, and the bar that sold ice cream cones—packaged ones, not proper gelato. Drawn by the allure of the pitching wails, the children climbed over the fence and crept through ochre grass towards where a pig, pink-fleshed and long as a man, hung upside down, its hind legs tied with rope to the high plank nailed either side to two sturdy poles. Its voice was feebler now. The children inched closer, but not too close.

Behind thick pale lashes, the creature’s eyes rolled in its head as it twisted on the rope and its mouth frothed pink. When it saw them, the pig stopped screaming and they stared at each other in the silence of the Sunday morning.

But they were not alone. Jolly Sergio in his spattered apron came striding down the path, a hefty pointed knife shining in his fist. The children ducked and watched him through the grass. Just then the pig came back to life and shrieked an agony that rent the air. Sergio jumped, missed his step, and landed in a heap on the ground. The children bolted. By the time they reached home, the screaming had died but they could not be persuaded to go back outside, not for anything. Fa had to go and get the bike himself.

After that, the children begged their parents to plant broad beans and zucchini in the crumbly dark earth of their little garden. They watered and checked on the perky shoots daily. Those all died too, Fa could not explain why, the soil perhaps, although it was the same soil as Cesarina’s, or maybe the seedlings had been off. Ma complained at the plant nursery and got a refund, but the children were down in the dumps about the matter for days, thinking they’d planted things wrong. It wouldn’t have been so terrible had not all the geraniums on the balcony withered also, practically overnight. The toasted tangle was discovered in the morning. Well, the summer of ‘76 was a hot one, record-breaking. ‘What else can you expect?’ Ma said.

Cabin fever during a heat wave being a rotten thing, Fa offered to take the children to the annual fun fair up at La Storta, on the edge of Rome’s suburbs. They were waiting in line for fiera tickets when a gondola shot off the Ferris wheel. As a chaos of ambulances and police cars ensued as is possible only in Rome, he pulled the children away and bought them goldfish in a bag. Gently they carried them home.

No one really expected them to last. It would indeed have been strange if they hadn’t bloated and flipped over after a couple of days, and what were those white spots anyway? Ma said it was overfeeding and Alex became very quiet.

Another day, a body was discovered in the cement at the building site. Fa said the children mustn’t play there again, not while the bulldozers were operating. That and the accident on the road involving a bus and a truck of watermelons (a massive mess) led to Fa’s edict against riding the bike too, but the children didn’t listen, until that is the train derailment that pulverized the butcher’s shop. ‘Legs, horns, and feathers everywhere,’ Cesarina said, with relish. The papers were full of the triple murder at the nearby hotel, concluding it had to be a mafia job when the abandoned machine guns were traced back to owners in Sicily. ‘At least we don’t have to worry about cholera anymore,’ Ma said, on reading about the new vaccine.

‘Indeed, and yet rather a lot of death this year,’ Fa remarked, and said it reminded him of when Donald Barthelme had written about similar happenings at the school in New York. Fa grinned but Ma shook her head – she was never sure how to take Donald’s stories, and couldn’t understand why people thought him amusing and insightful.

‘But what actually happens when you die?’ Alex asked. Gian said you go to heaven, silly, Ma said that only happened if you were good, but Fa said that, either way, death comes to everything so we must enjoy life while we can. ‘Death is an artificial construct,’ Trini said, and was explaining how all matter was recycled energy when that Ma cried out it was time. Fa jumped up and bundled everyone into the van. While Ma panted in the front and the children sang Old MacDonald in the back, he wove through the traffic to the hospital, one hand on the klaxon all the way, very almost demonstrating that point about the artificial construct.

In the hospital, the children wanted to see the baby being born but Fa said perhaps another time, and Ma said never. ‘You saw the tomato garage,’ Fa said, to appease them. ‘It’s a bit like that, except for the glass.’ He held Ma’s hand. When she started to scream, which was at once frightening and familiar, a nurse appeared and said everything was all right, ‘But you children, must wait outside.’ Fa gave them a few coins to buy maritozzi from the hospital bar, and they sat on the cool tiled floor in the corridor, licking the sweet whipped cream from the soft buttery brioche.

It was much later, when silence returned at last, that the children were allowed back in the room. They gathered round Ma who held the bloody crusty baby wrapped in a soft crocheted blanket. Trini and Gian and Alex bent to kiss it welcome, and it whispered something to them, something important that widened their eyes and which they would have shared to bring about world peace and harmony, but then the baby started crying. ‘Ah, it’s hungry,’ Ma said, and they promptly forgot.