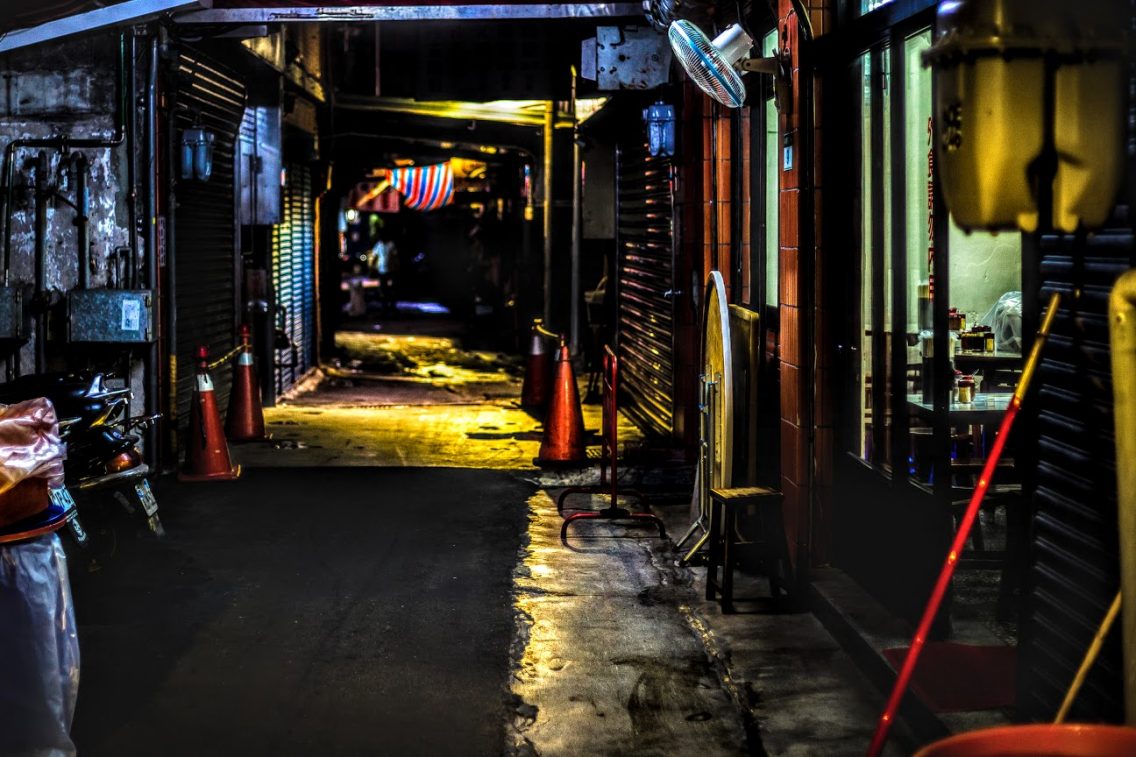 [ This image is in the public domain. ]
Motobuchi·
Short Fiction

Below her fur coat, The Tracer’s boots skim asphalt. She stops, and indexes the area. Flyers droop from brick. If The Tracer could read English, she’d decipher the outcries. WASH YOUR HANDS. DEADLIER STRAND OF CORONAVIRUS. What Should I Do If…? Keep your neighbors safe! Happy, cartoon families wearing veils and visors. Autumn fog warping their faces onto soggy slab. None of this concerns her. Wait. Her tail perks. The Tracer inhales a clue from her target’s vicinity.

Yes. The blue person’s nearby. Somewhere through this backstreet contaminated with stillness. Most scouts never trespass the silent dimension, but The Tracer slips right through. Though should she wake the quiet beast, someone could come blazing. They’d kill her. Bang! No more home. No more family. She keeps the agreement. If silence tells a story, she wouldn’t interrupt. She’ll connect dots without dots connecting to her.

They wonder how she does it. Only she knows. Her spine rings the alarm. Her nose reports the difference between fear and foreboding. And if her targets, the blue people, find her first, she’ll lunge. It’s true––they will suffer. They will die. But what is a life that only brings death? And what is her life, when no one says her name? She’ll decide when—not if—the violence comes for her. She traces lines. She aims for targets. She goes unnoticed. This makes her The Tracer.

Beyond a stench of rats and rainwater, the target shifts. Behemoth slugs invade a parking space. From beneath a minivan and its reek of blood and gasoline, the slugs ooze. How strange; no mollusk odor registers for The Tracer. When she investigates, the globs actualize into rubber gloves slopped onto the street. She feels heat emanate from rubber. Someone wore these––maybe minutes ago. The Tracer collects. Gasoline… Blood… She’s processing. Confirming a transfer point. Yes! The olfactory formulas divert here.

The wasted latex leads into a passageway stinking of wet ash. Memories of capsaicin. The efflux hangs and she spots it––the canister. With its pepper scent polluting, her sniffing wanes. The sneezing comes, exploding from her head. A sting in her eyes keeps stinging, but she bears it. With clogged sight and smell, The Tracer expands her other senses.

Cardboard mush litters the streets. Defund Police. Black Trans Lives Matter. ACAB! ICANTBREATHE. Sneaking over all the bleeding ink, her head slumps and she gathers breath. The Tracer understands the war. She gathers the mess they made. Most people guess her a bitch, a mongrel––coming from the streets and all. She’s got a limp and missing teeth. But they don’t know her story. If they’d just look at her collar, they’d know. She’s no mangy stray. She’s got a home! A place her name remains. She thinks she remembers, but can’t say it herself. Only her family sings her name. They know she’s more than a mutt. And wherever they are, they hold a space for her. A couch. A bed. Some squeaky toys. No targets. And no tracers. But now, her only path leads into this dead end. Her final avenue.

She wonders how the target will react. They usually fear the end. Could she blame them? The Tracer fears it too. She’s a good girl. A smart girl. At least that’s what Big Guy barks at her. Before she’s cast out, Big Guy goes, “What a good lil guy, ain’tcha? You’ll get another one. Wontcha, lil guy?” Then he slams his door. The Tracer doesn’t mind Big Guy. He, at least, rewards her with a bed and food scraps. And once she connects the target, she’ll return to Big Guy with a badge and a humble bed he saves for her.

Compulsion coils around her tail, pleading for another decision. She trudges through sludge. In a mirror of muck, The Tracer searches for reflection. Could she do it this time? Could she escape and run to the country? She remembers the family trips. Poking her face from the car into a hyper-speed paradise, her nose can map it all. Sticks and spores. Decay and creation. Berries, bunnies, and bones. She’d survive there. No doubt, she could.

But, no. What if her family comes back, and she’s gone? The Tracer can’t go. She’ll wait. They’ll come. She won’t starve here. No. No! She’ll reclaim her life. For now, she sticks with the tracers and Big Guy. She’ll wait with him inside his locked garage.

Her only key waits for her at the end of this alley. Chipboard and tarp patch every window along the way. Except this one The Tracer evaluates. She perches a view inside the apartment’s glow. Just through the window, a frumpish man pulls his sagging Hanes back above his waist. Next to him, a pile of discarded uniform with a badge gleaming from the center.

Her target. She doesn’t know Officer Murph Guinkle, only that he carries a victim’s scent. Just hours ago, Guinkle drove his minivan through four protestors while transporting his new ergonomic chair. The Tracer only sees cushion and aluminum structure. For Murph, the chair’s beauty comes with five wheels, six levels of back support, eleven articulated joints, and eighteen inches of adjustable seat height. He found her on Craigslist. Murph barely stays clothed as he molests his chair’s functional design. The Tracer connects the pieces. This is it. She questions if she’ll ever hear her name again. And if she disappears, does her name die too?

Out in the alleyway, a neighbor hears the shatter of glass. Next––Bang! Bang! Bang! Then, yelping. Not enough to raise alarm. Not these days. Neighbor taps a headline on her phone: German shepherd, first U.S. dog tests positive for Phase 2 of COVID-19.

Through a flickering streetlight, the shadow hobbles. Neighbor swings her head around, but sees nothing. Further down the alley, a contract with silence remains intact. Yes, The Tracer infects another target. She makes no contact with Murph, but she does feel her connection to his ergonomic chair. She’s positive she does.