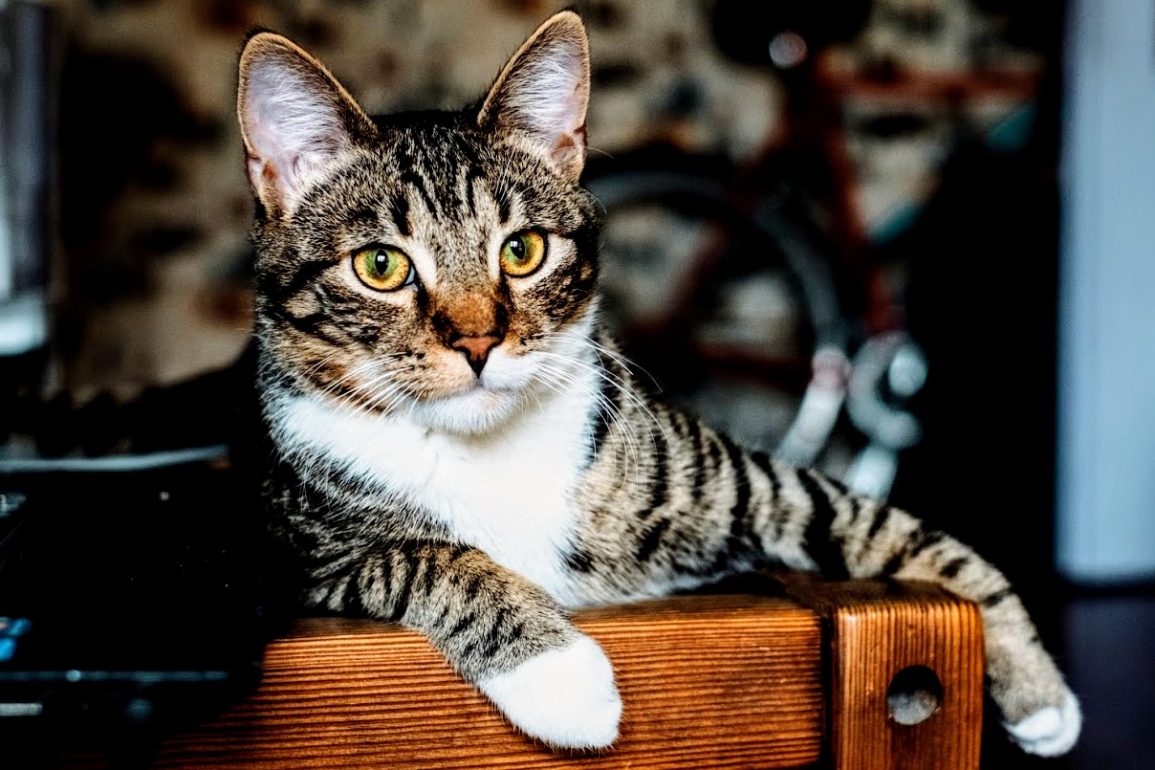 First one cat spoke, then another… soon they were all doing it. One—he looked altered—kept saying, “Ludicrous, this whole effing party is ludicrous.” He was a shorthair, which could be his sole reason for being obnoxious. That, or his missing jewels. Plus, he was silver-tabby, nothing to look at.

Julia with her long black hair and quaint Persian nose, with just a hint of curl under her neckline, asked, “Who is that Shorthair Tabby, and who the hell does he belong to?” She spoke with disgust, loud enough for the tabby to hear. You have to understand Julia; she typically ridicules everyone to whom she feels superior.

“Well, thank you, Milady,” he said over his shoulder, twisting his head around, plunging whiskers into his thin, silver neck and licked his shoulder without missing stride. He walked to the bar, sinews and muscles undulating under a glistening coat of silver and black stripes, while a grin appeared in his eyes.

Julia looked around at the three others in her group and tried to “harrumph,” to no avail. No one was listening after she got shot down.

Count Sebastian, decked out in royal Tortoiseshell Orange could be heard chuckling with effervescence at Julia’s putdown by the strange Shorthair. “Young man,” he said, bumping up against the tabby at the bar. “May I buy you a drink! You’ve certainly earned it, what?”

The silver Shorthair nodded at the Count with a broad smile. He detected a French accent coverup. “You are too gracious, my Lord. I stood at the door for the most of ten minutes wondering what the hell I was doing here. This whole thing was ludicrous! Muriel, the darling patchwork Calico called about an hour ago and invited me to the get together in this quite handsome Brownstone. I hadn’t seen her for, oh, god, at least a month and I thought, why not, we can catch up. I know she visited Rome and I wanted her to tell me all the details. But she’s not here!”

“Yes, yes, my boy. No Muriel anywhere. Yet. She is a bit of a night owl, isn’t she now?” The Count ordered two Juniper Specials, meaning English Gin with a splash of tonic over shaved ice. When Count Sebastian handed the drink, he asked Shorthair what his name was. “What do they call you, boy?”

“Please excuse me, my Lord Count. How out of taste! My friends call me Maurice. I spend my time in the Village, off Bleeker, a small third-floor walk-up. A comfy flat with a small veranda where I lie in the sun and dare the pigeons to land on the wrought iron railing.”

“What!” Count Sebastian stammered, holding back a deep-throated meyow’ of amazement. “Why, I live south of West Houston, a piss toss from Broadway!”

“I know, my Lord. I’ve often watched you travel from one side of Bleeker to the other, unperturbed by honking taxis, Ubers, and Beamers. They ought to know that the Count of Cordes sur Ciel, of Southern France, has taken residence in our humble city.”

Count Sebastian stepped back to course his eyes over the young Maurice. The lad had a depth of knowledge that could take him places, if he had balls, that is. Sebastian finished his drink in one gulp and ordered two more, although Maurice hardly touched his. “Drink, lad, drink. We have planning to do!”

Maurice was perturbed by the Count’s statement. What planning, he thought to himself, as he smiled and gulped his Juniper. Instinctively he tightened his sphincter, licking Juniper Special off his paws.

As the two toms were served their second Specials, a hush came over the thirty or so cats throughout the suite. Sebastian cleared his throat, sounding like a stuck hair ball hack. When Maurice turned to offer aid, the Count nodded toward the door.

Felicia, long flowing blond hair, coiffed tail, diamond-studded neckless, stood at the door, letting her eyes adjust to the party lights. She acted as if she was looking for someone, but Maurice knew it took a moment to adjust the eyes in the lowlight of Sylvia and Paul Furline’s Brownstone. As Felicia Felidae, the heir of the Felidae de Orr line of cosmetics, walked into the gathering room she was surrounded by groupies, including Julia with her long black hair. Julia thought being next to Felicia caused her black hair to look darker. It might have, if the red jealous rage riding just below the surface didn’t wrinkle her nose enough to cause her top teeth to protrude, just a bit.

“Hello, Julia,” Felicia said, not making eye contact. Before Julia could respond, Felicia swayed to the bar, catching Maurice’s eye. “Hello,” she said, locking onto his eyes. “We do know each other, don’t we?”

Before Maurice could answer, Count Sebastian threw his arm around Maurice’s shoulders. “Come with me now!” he said with gritted teeth.

Maurice was shocked as he stepped off, his eyes caught and held by Felicia. “I’ll be back, in a moment,” he said to her, as Sebastian continued to drag him to the next room, covering his back.

“I’ll wait,” Felicia said. Her eyes never wavered from his.

Count Sebastian half pushed Maurice into the small bathroom, locking the door behind him. He placed Maurice by the sink and turned to face him. “I like you Maurice,” the Count began. “You are bright, intelligent, and masterful at making others feel at ease. You are definitely going places. You lack one thing; two things, actually.”

Maurice lowered his chin, gazing at the white and black four-inch floor tiles. “No balls.”

“Right you are,” Sebastian gave a hairball cough. “However, because I like you, I’m going to share one of the darkest secrets known to our Feline Civilization.” He reached into what looked like a hip pocket and extracted a small ball sack with silver strings. “What does this look like?”

“Exactly, my friend. And what is it you’re lacking?”

“Exactly. Now, this is how you put it on.” Count Sebastian wiggled his left, then his right leg. An orange ball sack dropped to the ceramic tiles. Sebastian held two orange strings in his hand, pulled them up together and wrapped them around his waist where they immediately blended into his gorgeous orange tortoiseshell printed coat. The ball sack followed the strings and found its place under the orange tail. “See? Simple!”

“We don’t need them, my friend. They make us smell, stink, actually. We moan and cry into the night, get in trouble, get killed by bigger cats, or rowdy dogs or boys with sticks. Without them, the real ones, we can do anything. We own this city, Maurice. The women are enamored, fascinated by our whit and uncanny ability to achieve the highest levels our species allows.”

“Let me help you,” the Count said with assertion. “I will help you but once. From then on you will fix the sack without any effort. You will never go out without it. You will climb the marvelous ladder of success, joy, prosperity. You will find a feminine feline to follow you anywhere.”

“I think I already have,” Maurice said, thinking of Felicia. “Let’s do it!”

Within a minute Maurice was wearing his newfound sense of self. To be sure, he shook first his left, then his right leg, dropping the sack to the tile floor. With a sweep of his front paws, he clutched the silvery strings and zipped the ball sack snug under his tail.

“Not too snug, my friend,” Sebastian laughed. “Drop it down a tad. Make room for other things, right?” He laughed again.

Maurice made the adjustment and walked around the room. He jumped in the litter pan and took a leak. “Works well,” he grunted.

“Indeed!” The Count of Cordes sur Ciel, of Southern France, smiled, turning his head from left to right, examining his new friend’s courage. “I believe it’s time for our entrance.” The Count went out first, followed by Maurice, the up and coming Silver Tabby of Bleeker Street.

“Maurice! Where have you been? Sylvia said you were here. I’ve looked everywhere!” It was Muriel, the Patchwork Calico. “I’m so glad you came,” she yelled across the large gathering room. Muriel had large orange, black, and white patches over her entire body. One ear was orange, the other black. She wasn’t wearing jewelry but was scented with something exotic, probably from Italy, or Felicia’s line. Count Sebastian was caught by the scent and swooned. “Muriel? Maurice told me so much about you. I held my breath until we met.” Sebastian held out his arm for her to weave through. “You must tell me about Rome! A lovely town, is it not?”

“Why yes, it is,” she said, wondering who the regal man was in Orange Tortoiseshell.

“By the way,” he said, smiling like the Cheshire, “I am Sebastian, the Count of Cordes sur Ciel, of Southern France. Have you been?”

“You must come,” Sebastian wrapped his paw around Muriel’s orange and white waist. “But first drinks, and then Rome. If there’s time we can talk about France.”

“Of course! Come, my dear.” They walked to the bar and took their drinks through the double doors and onto the veranda, to listen to each other and the evening sounds of New York.

“Did you forget about me already?” Felicia was standing behind Maurice, rubbing her head on his hind right leg. She had a perfect view of his new prosthetic and could not tell the difference. She thought his scent was rugged, masculine, without the pungent odor of male-heat. “You’re different,” she said in a coy, curious voice that asked for more.

“A drink?” Without waiting for a reply, Maurice ordered two Juniper Specials. He turned to Felicia. “My friends call me Maurice. Will you?” He picked up the two drinks. Felicia grabbed his bent arm with one paw and put the other around his waist.

“There’s a quiet area in the back. Come. I’ve been here before.” She half pushed Maurice through the door to the bedroom. They laid on the bed, sipping their drinks. “You must tell me all about you,” she said.

“I’d rather hear about you.”

“Handsome, and smart. Did I tell you I love the color of silver?”

“It does go well with blond,” he said.

EDITOR’S NOTE: This story was selected from entries submitted to our Creative Challenge 72, which required that the first sentence must be used as given.