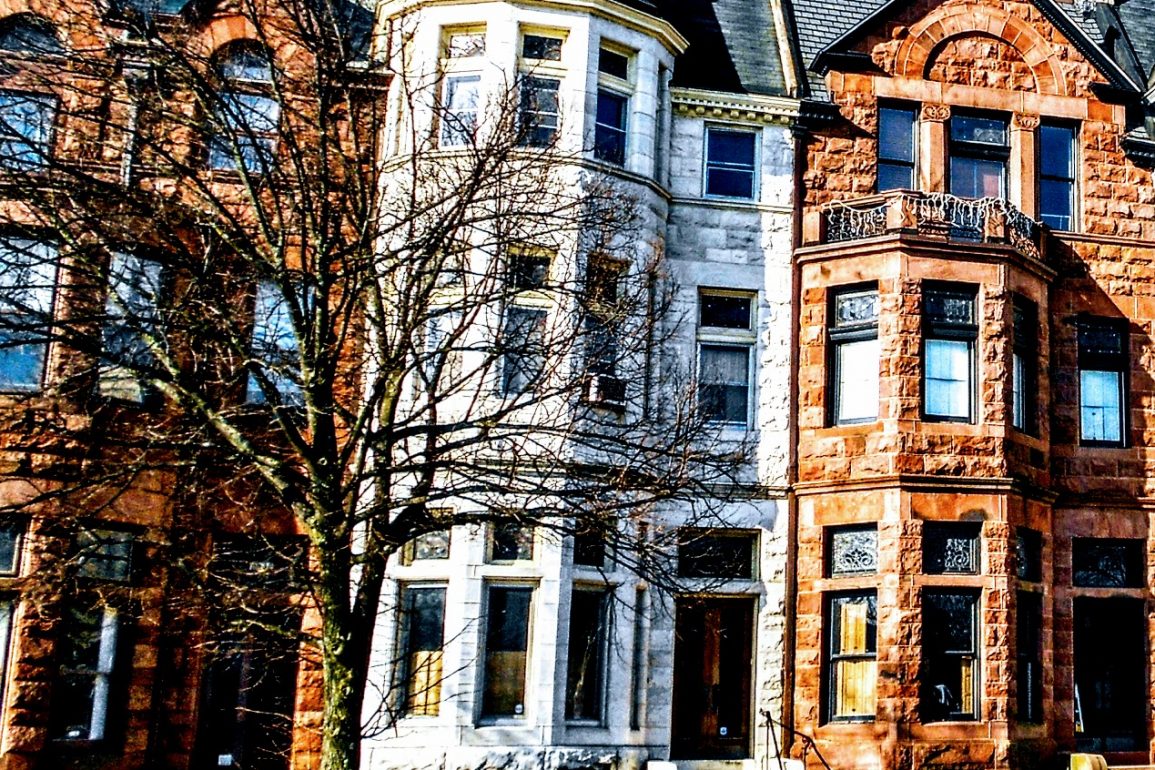 [ This photo is in the public domain. ]
Linette Marie Allen·
Short Fiction

We have a plant called Baby. She’s large, red-leafed and green-veined. She sits on the windowsill of my bedroom, overlooking row houses in Reservoir Hill. She’s fascinated with the trees. They look like men frozen in battle. There’s something about their arms that especially intrigues her. They appear to be grasping the rooftops of brownstones. There’s a green curtain above her and she likes that too because she knows it’s not really green but teal, and teal reminds her of the Tyrrhenian Sea, a place she’s never been but has read about. She knows Gore Vidal once owned a mansion there, and she thinks that’s kinda cool—a writer who owns a mansion overlooking the sea. Her favorite book is The Drunken Botanist by Amy Stewart. There’s something about those monkey puzzle trees that have titillated her for weeks and weeks. She overhears conversations. She sees things. And last night she overheard a conversation between my lover and me. We were sitting on the smoky gray sofa in my living room. It looks like the gray in the painting that hangs above it, a square painting with no name. It reeks of lime and aqua and ivory and flits of chilly gray—followed by more ivory and a swash of something that looks maybe baby-blue in the distance—a beach scene. So, anyway, we’re sitting on the sofa and we’re talking about the future and he’s looking at Baby the whole time. He doesn’t give me any eye contact and I think that’s a little weird but I don’t stop to make a point about it. But he does, after five minutes of rambling on and on about Baby—his one and only gift to me—not getting enough water, not getting enough sunlight, turn and say, “I’m dangerous without you.” And though he was pithy in bed, and though we’d had some sweet moments at the park, and though he was a decent conversationalist over coffee, and though he’d tasted my paella and still loved me, I knew Baby had to go.

Nobody spoke. But he knew what I was thinking and wept. I reached for a Kleenex. He tapped the back of my hand. I froze. Wiping his face with his fingers, he spoke of a story he’d recently read and—though he couldn’t remember the name of the publication, as he’s not one to luxuriate in literary magazines—sputtered out the title, “Pink Over Chocolate”, an essay of sorts, he said. I crossed my legs, hovering my hand once again over the Kleenex box, suggesting he really ought to take one. But he continued his line of thought, something about how he had never pictured pink and chocolate together and how he thought the titling of pieces was a kind of crap shoot. He himself is a gambler, a poker player mostly—and so I guess he really ought to have known. He talked about towels, of having seen one hung from a balcony in the city just moments after laying the essay in his lap, of how we drape the wet and heavy things, of how we sit and sit and sit and wait for them to dry out, of how they never get dealt with in their natural state. I asked him if he assumed that the natural state of things was wet and weighty, and he nodded and slowly crossed his legs and then gave me a look to see if I might challenge that. I didn’t. I uncrossed my legs and walked over to the wine rack. I lifted a 2016 Malbec and searched for a corkscrew. His eyes didn’t follow me, and his eyes always followed me. He looked out the window and studied the beeches, the busts of sprawling Georgians—the lute metal framing the windows, the frosty veneers decorating the roofs, the white slick of the cars, the dazzle of headlights wetting the lane, sploshes. The sun had just gone down, and there stood a color, a kind of orange bleeding a navy.

A gas-range fire on medium?

Yes, that’s it exactly. He faced me, startled, pretending not to have heard my thoughts. So, anyway, I popped the cork, fingered the stems of two glasses, eased them down onto the table. I Iooked at him, then looked at the bottle cocked, and he nodded, and I poured. I handed him a glass, and he didn’t wait for the bevel or the sniff or the gargle. He took a deep sobering sip and shook his head. The shake was neither to me, nor to himself, nor to the title he’d come to loathe—“Pink Over Chocolate”, but to every decision he couldn’t live with. He was shaking his head to that. He was shaking his head to everything he could never forgive himself for. He was shaking his head to every woman he ought to have loved but couldn’t—to the drug he should have stood up to but didn’t, you know, that kind of thing: the ink he should have been penning, but wasn’t. I mean here’s a guy who carries the official card of “Writer”. He has an MFA, just like I do, but has never published anything and has never shared a longing to publish anything, has never approached me about editing, has never spoken of any goals or plans, dreams or visions. We never delved into deep conversations about which journal he’s just submitted to and is anxious as hell to hear back from. We never got into those kinds of things. But he was one hell of an explainer—about why he needed a certain plant, what the plant did for him, why he would never give it up, how he would be unbearable if he gave it up, and how I would hate myself. So, this is where his talent lay. It lay in making a strong case for his “green” drug addiction, for why he was laissez-faire in nearly every aspect of his life, why he saw everyone in his life as relative—why he’d treat his girlfriend no differently than he would his brother, not treating one more special than the other. The librarian, the paperboy, the professor, the co-worker, the lover, the cousin—all thrown into the same camp. He felt no difference between them, and it’s funny because Uranus rules him, and Uranus is one of those slippy planets. Uranus is the only planet in our solar system that hangs there, as if suspended in a giant parade, tilted vertically, spinning sideways. The sign of anthomaniacs? A rather erratic planet, composed mostly of ices, the coldest of the lot, it doesn’t swivel in an upright manner. Cosmologists everywhere—including a bald, surly one that I know of in Potsdam—admit they don’t know where Uranus comes from, that Uranus is not from our star system but is actually a rogue planet—a featureless disc—from a different star system.

I think of sharing that bit of information with him, then rethink and decide not to. Instead, I let him revive his “Pink Over Chocolate” rant. Yes, I let him. He wasn’t loud or anything. He didn’t raise any brows. But he had a bad habit of clenching my hand too tightly when he got excited. So, we drank and crossed our legs and drank some more, and I grimaced, clench after clench, eyeing first Baby beneath the cool of the open window, before motioning for another, whispering sweetly in his ear.