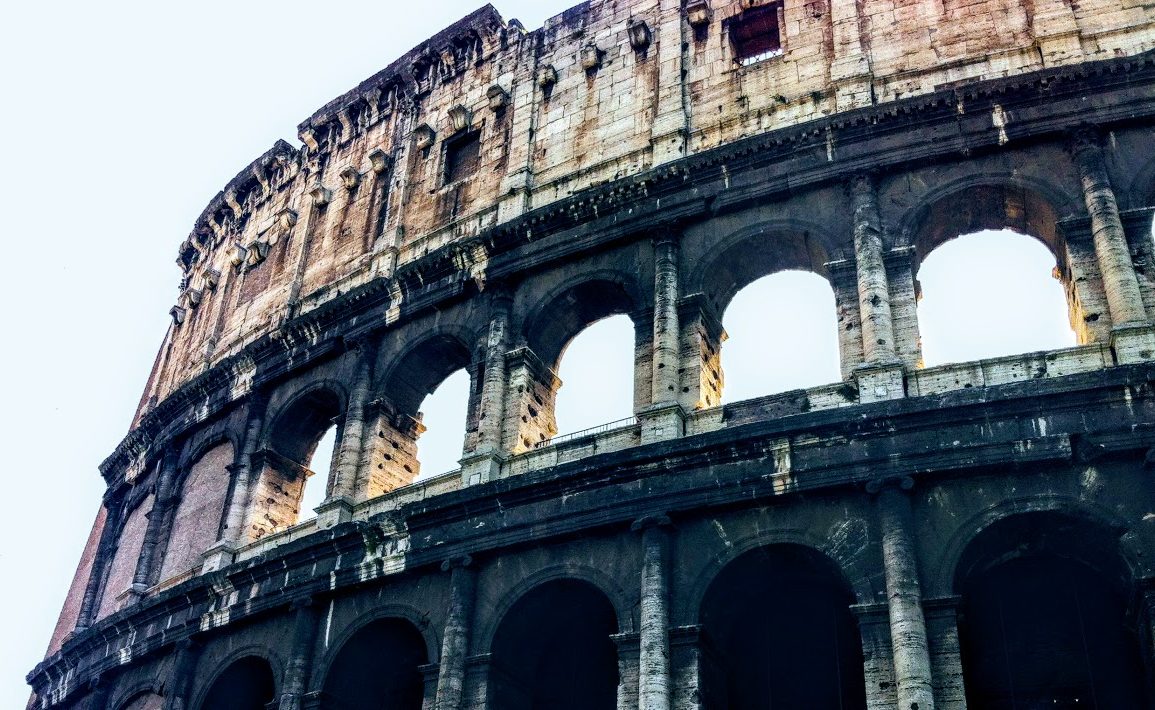 It was dusk when I arrived in Rome, too heartbroken to be hungry. In Paris, I’d convinced myself that the sight of the carved-up Colosseum might somehow fête the façade so lately quarried out of my own soul. I headed there diagonally from Fiumicino. When I reached the arena, iron gates already closed fast the ancient porticos. Reminded that the only true eternality in any city after sunset is dinner and drink, I resolved instead to pursue the Via Sacra towards the ristoranti canopying the Forum.

Halfway down Via dei Serpenti, from inside bronze doors thrown open emanated a sunset horizon. I approached slowly and entered the church. The sanctuary smelled of lilies. Candles grew out of circular grilles filled with sand like reeds of white wax growing along a waterless shore. They cast their twilights onto an icon of the Madonna with no child. Nonne veiled in black lace creaked Rosaries on their knees. Their beads tinkled like raindrops on a tin rooftop.

I crouched in a pew near the narthex, where the unbaptized belong, and listened to their praying as one listens to a lover’s heartbeat after making love. I listened to the nonne hail the Maria until I was too hungry to listen to them hail anymore. I lit a reed of white wax and buried it in the sandy banks beneath the childless Madonna. Then, I stepped back through the doorway into the dusk in search of a nearby trattoria.

I peeled carciofi with my teeth and wrote in my notebook of my recent histoire d’amour. I did not notice my Aquiline waiter until his English rumbling with Italian probed my silence.

“What are you writing?”

I smiled, and a glass of liquid citrine appeared. The index finger of the right hand delivering it was tattooed with the Greek letter upsilon.

I sipped slowly. The other diners dwindled. Soon, I was alone, and the virile Roman was stripping cloths off tables like licentious senators once dropped their togas when left too long alone with their slaves. He blew out candles and chained up chairs. Finally, he came for me.

“What does it stand for?”

“Have a drink with me and see.”

At midnight, he whisked me to the closest bar, in the shadow of the Colosseum. I stared at this man with the amphitheater glowing orange behind him and wondered how it was that I had changed men so quickly, if it was even possible for a woman to ever really change men, and had a man ever really changed me?

“But what is your dream?”

“But don’t you have, you know, a bigger dream?”

“What is a bigger dream than life?”

My fingers curled around Utopia as we made for the dust bowl where the Emperor Hadrian had once been compelled to haul away a humongous bronze likeness of his dead predecessor before building his new sanctuary. The ancient arena was still lit.

“The games really are eternal then.”

He kissed me like the eastern edge of the Forum once kissed the Colosseum at the Temple of Venus and Roma. His kiss cleared away the Gallic debris, as if my love was something I possessed, and so, mine to be forgotten.

“I have a bottle of vernacchia in my car…”

I followed him to a grey Fiat penned between motorbikes nearby. While he retrieved the bottle, I stared at the place where Nero once stood and wondered how exactly history had twice disappeared a colossus ten stories high.

I curled in his lap on a bench between Trajan’s Forum and Altare della Patria. We drank the wine (soft yet heavy, with notes of oak) then kissed with the abandon of 7th century Christians stripping the splendor from pagan temples despite carabinieri patrolling by.

“Sei tutta bagnata, Belladonna!” he exclaimed when the hand that had served me dinner was up my skirt. Then, Utopia was inside.

“Così? Così? Così?” he whispered over and over until I cried out. Soft yet heavy, with notes of oak.

The following morning, a message: “I have something to tell you. Meet me in Piazza Madonna dei Monti?”

On the steps of the church of the Mountain Madonna With No Child, he confessed our sin, dually committed and omitted.

We went to dinner anyway, drank vernaccia and I pointed out which ravioli we ought to order like it was not a sin.

When he kissed my neck in the grey Fiat afterwards, I protested. But he raised Utopia to my lips, pried them open, and slipped inside. I bit, hard. In an instant, he was digging up my dress. Another lonely archeologist tearing apart the undying city for her secrets. His right hand ascended the Velian way of my left inner thigh. I stripped off his t-shirt, unzipped his jeans, and he offered me his libation. How much mightier was Rome than Gaul! I venerated him venerating me. Then, suddenly, I remembered the nonne on their knees.

He pulled me astride him on the driver’s seat. Enthroned back to front, just like the wreckage of Venus Felix’s east-facing cella still oppose Roma Aeterna’s west. Our four legs colonnaded the sacred altar where Utopia began to worship, circumambulating Cyrenean vaults, until I moaned to the gods to consecrate the sacred rites, “Lo voglio!”

Together, we offered the sacrifice. He looked me in the eyes the whole time.

The sun nearly crowned the old Senate House when we drove the grey Fiat past the Colosseum to my alberghino. The ancient arena was dark.

My last day in Rome was his first day off in a month. He bought me a train ticket to Anguillara, close to the village where he lived with her. The grey Fiat was waiting for me at the station.

We spent the morning pushing our feet through the rocks and sand that dusted the paths leading to the medieval hamlet cropping out of the little monti rising from the shores of Lake Bracciano. When we got to the top, he gathered my hair into a loose ponytail, pressed me against the wall of an oratorio and kissed me vigorously. Against my will, he removed my sunglasses.

“I can see the blu perfectly fine with them on. Dammi!”

“Aspetta! Your eyes just need to get used to the light.”

We lunched on pasta, grilled veal, and crema catalona at a small osteria tucked inside a rustling cypress grove.

“Belladonna, perché you say you are not already a writer?”

“Can we ever be what we want so long as we love what is bad for us, Amore?”

By the time the grappa arrived, I knew he was right: I would never forget. Because my guilt was not a thing that I possessed, it was not mine to be forgotten.

“Have you ever tried mirra, Belladonna?”

“Have a drink with me and see.”

“To help you write better.”

After lunch, we spread a blanket on the pebbled shore. The lake lapped and quivered with fish. A lavender wind moved the afternoon through the cypresses and the cicadas sang.

“I may be poor, but I would never giocare alla lotteria.”

We tripped laughing into the water, waist-deep and naked in the lake of myrrh. Birds turned in the cloudless bowl of blue overhead and the lake kissed the stony shore. He splashed me playfully, and I clung to his neck.

But we did not make love again. The sacred mystery was over. All that was left to do now was wait for the pope to come and strip the gilt-bronze tiles from the temple roof for the adornment of St. Peter’s Basilica.

“Do you feel wrongly for what we have done?”

“You will be absolved, you know. For nostri peccati.”

“Do you think what we did was that wrong?”

“Io no, but I think tu sì. Ti posso battezzerà!”

“And how are you going to do that, Amore?”

“Because I am a pure Christian.”

“Because I love you.”

I looked down and saw our four legs colonnade a central nave, one altar consecrated of two sorrowful bodies. I suddenly understood that the water brimming therein was holy. He made a chalice of his palms lifted it above my head, offering me his libation. His wedding ring glistened. Suddenly, I remembered the nonne on their knees.

Together, we offered the sacrifice. He looked me in the eyes the whole time.

Back through the clear waters we threaded, our bodies braiding the obedient waves. On the shore, afternoon’s last dappled the cypress leaves. I rested my head on that heart which did not belong to me.

“You know, Amore, if I ever write a story about today, I will call it Utopia.”

“No, Belladonna, you must call it Lago di Mirra.”

At the train station, he kissed me on the cheek and gave me his email address. I promised to write.

For the last time, he touched Utopia to his lips, then to mine.

On the train, I thought of the Madonna of the Monti and the nonne and how I was never going to see him again. I did not blame the Maria and I did not blame myself: I already knew all I needed to know. Why he had come to me, and why he could not be mine–it would only be a sin if we spoiled it. We think to possess things we believe are ours, but no: “la vita sta bene così.”

It was dusk when I arrived in Rome from Anguillara, but Santa Maria ai Monti was still open.

I entered the church. Beside the nonne on their knees, I lowered myself. Even though I did not know how to hail, I hailed the Maria with them until I was too hungry to hail anymore.

Before leaving, I lit two reeds of white wax and buried them in the sand beneath the Madonna With No Child. That was when I saw it: al blu.

Beyond the door, the dusk bled indigo. In the nearby distance, the lights of the Colosseum blazed. I turned away from Nero’s empty pediment and set off the other way down the Via Sacra in search of a nearby trattoria.