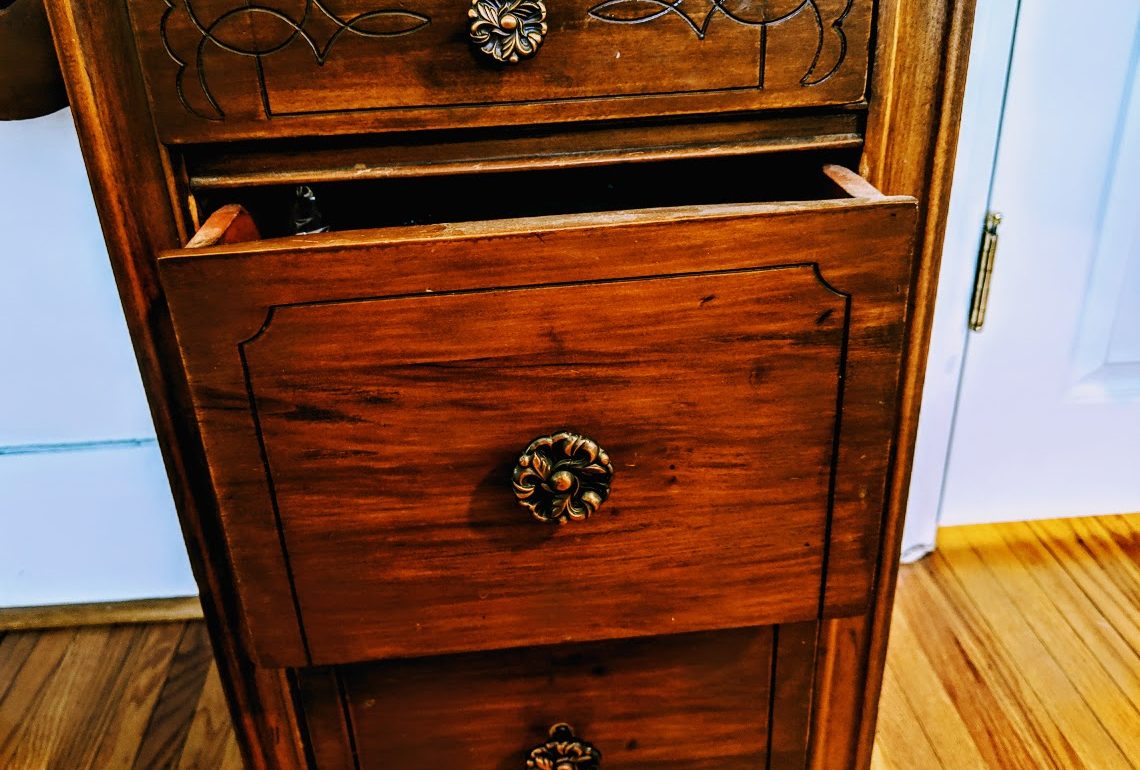 The Man in the Drawer

Sergeant Mark had spent nearly twenty-four years of his retirement in a middle drawer. The wooden desk had three drawers on its right-hand side, and he was in the middle one. During much of that time, the drawer also held an ivory cigarette holder, a duck call, four tarnished Lady Liberty silver dollars, a pushbutton cigarette case also tarnished silver, an embroidered souvenir patch from Wyoming, a matchbox-sized cardboard container of Air Mail stickers, and a few other so-called collectibles. Sergeant Mark was the only animate inhabitant of the drawer, separated as he was from his mates.

The other men, also retired from service, had been redeployed to Shippensburg, Pennsylvania, where they were reactivated. The Real Man had shipped them to Shippensburg en masse, intended as a present for his nephew, the son of his brother, who turned age five that winter. The Real Man had carefully packed them all within a sizable shipping carton along with some bunched-up kraft paper to cushion their ride from New Hope, Pennsylvania, to Shippensburg while in custody of the U.S. Postal Service. They traveled as groups, each group wrapped in royal blue felt sacks, cinched with a drawstring, that had once held fifths of Crown Royal blended Canadian whiskey. Those shipped to Shippensburg included remaining members of two companies of Civil War infantry, small tin men scarred and in tatters. The two Civil War units rode in separate Crown Royal bags, one holding Blues and the other Grays, along with a few chipped cannon and wagons that each side had retained somehow over the years. Another bag held all-white plastic baseball players, about three inches tall, in various stances—some at bat, some fielding a grounder, some winding up to pitch with arms close to the chest while their legs curled upward to deliver the ball more forcefully. Another bag held fighters from the Crusades of the Middle Ages: small, painted metal men with pizza-sized shields strapped to their hands, some with lances, some on horseback. A troop of plastic French Foreign Legion fighters rode in another Crown Royal bag, wearing hats with flowing neck protectors, some with weapons and some just standing their ground, which was a spit of flat plastic. Red molded-plastic American Indians traveled in their own bag, some threatening a tomahawk blow, others riding bareback ponies. Their enemy, the rifle-toting and coonskin-capped settlers, had been reduced to one survivor. (Good riddance.)

While the Real Man back then packed the shipping carton to send to his nephew, Sergeant Mark had escaped. His advantage was his permanent pose in a running position, attacking or retreating. Often during his active career, he was placed in situations that required both attacking and retreating, even in the same skirmish. You could tell, looking at him, that he was a good runner. Comrades in his U.S. Army Second World War platoon, one kneeling with a bazooka perched on his shoulder and another crawling on knees and elbows while aiming his rifle, were weighed down during the packing operation, allowing a less-burdened and swifter Sergeant Mark to make his escape. This group was all hard plastic Army-green, and they all stood taller than the other men who shipped to Shippensburg. Even so, all of Mark’s platoon, except him, were stuffed into one of three felt Crown Royal bags that the Real Man placed into a cardboard carton along with brown kraft paper.

By his own cunning, Sergeant Mark had run off and eventually made his way into the desk drawer to join other collectibles. While there for nearly twenty-four years, he saw very little action in the drawer. As the only animate inmate, he carried on no intercourse with the coins and abandoned smoking supplies who also inhabited the drawer. A few times, he saw the duck call forcibly removed, and he actually heard the blurt—“WAANK!”—as though someone were trying to attract wild ducks.

His life in the drawer had not been boring, mainly because it did not differ that much from his life before the drawer. During those earlier years, he and his retired comrades lived in what was known as a “shirt box.” They endured, without complaint, long stretches of time when all they could do was remember, silently, escapades from their active duty period, when the Real Man and his brother set up all manner of encounters for Sergeant Mark and the rest of them. He recalled times when his platoon was summoned to sally among tall, gray plastic Germans in their rigid helmets and sturdy boots, brandishing their potato-mashers and lugers. While the fighting itself had its truly terrifying moments, Mark usually returned from those flights of memory with a satisfied air, knowing that the gray Germans were no longer around. Most of his Army-green plastic buddies survived those times, but most of the Germans did not.

Soon after the men arrived in Shippensburg, the Real Man received a thank-you note from his young nephew. In belabored, awkward handwriting, the nephew transcribed what his father had dictated:

Thank you for the toy men. They are happy to be here. We will have fun.

Sergeant Mark was unaware of that letter, of course. Although alone with his memories and his newly met neighbors in the drawer, he remained pleased that he had skillfully avoided what seemed at the time to be an aggressive and violent upheaval. He sometimes wondered how his life would have turned out had he not escaped, if he had just allowed himself to be swept up with all the other men whose fate he did not know the entire time he was in the drawer. He did not know where they had deployed, but he figured he would have seen more action with his group, more fighting, more peril. Wily and swift as he was, he had no doubt that he would have performed well. Yet, he envisioned the specter of sudden death or capture or banishment, inflicted upon not only himself but also his fellow fighters. They all had prepared themselves for the ultimate cast-off, or so they thought, but none could foresee with any certainty how that might occur. Nevertheless, Mark had no reason to feel anything but contentment during his twenty-four years in the drawer. Restlessness simply had never occurred to him. He felt at ease.

So it came as quite a shock to Sergeant Mark’s system when the Real Man one day abruptly snatched him from the drawer and stood him upright on the desktop in harsh daylight. Once he adjusted to the surroundings, Mark saw no other men in the vicinity. A mouse next to a closed laptop computer looked like an armored animal crawling toward a slab of steel. A bulbous ceramic cup holding pencils and pens looked like an arsenal of heavy weapons. A startled Mark watched the Real Man pluck one of these implements and maneuver its tip along a large sheet of white paper. Although he remained in the running position, Mark saw no immediate escape route. Even if he had spied a way out, he did not have time to make a dash for it.

The Real Man knew Sergeant Mark as a retired Army officer who had served ably and honorably. Even so, he grabbed the olive drab plastic man and shoved him unceremoniously into a mailing envelope. The envelope lay flat on the desktop, lined with padding made of some fiber or newspaper confetti. Inside, on his hands and knees in the dark, Mark felt the white paper, folded in quarters, slide in next to him. He listened as the Real Man pinched the escape end of the envelope, then slammed staples into it. The next day, the Real Man mailed the package to Akron, Ohio, where his nephew was a young faculty member at the University of Akron.

During his blind journey of about three days, Mark experienced a number of sudden jolts, thuds and yelps, cushioned and muffled by the adequate padding of the envelope. While unfamiliar, the jolts seemed not as jarring and violent as those he remembered from his days of combat with Germans.

The U.S. Post Office at Five Points in Akron held the package on a rack in the back until the Real Man’s nephew fetched it and brought it home. Upended now on a kitchen table, Sergeant Mark in his running pose stood in new daylight. The nephew read the note that the Real Man had written to him.

This soldier must have escaped while I was sending you those other toy men way back when you were young. If the others are still around, please introduce him carefully. Keep in mind that he has been separated from them for a long time, and he won’t be aware of what they have gone through. His sense of time and history is different than theirs.