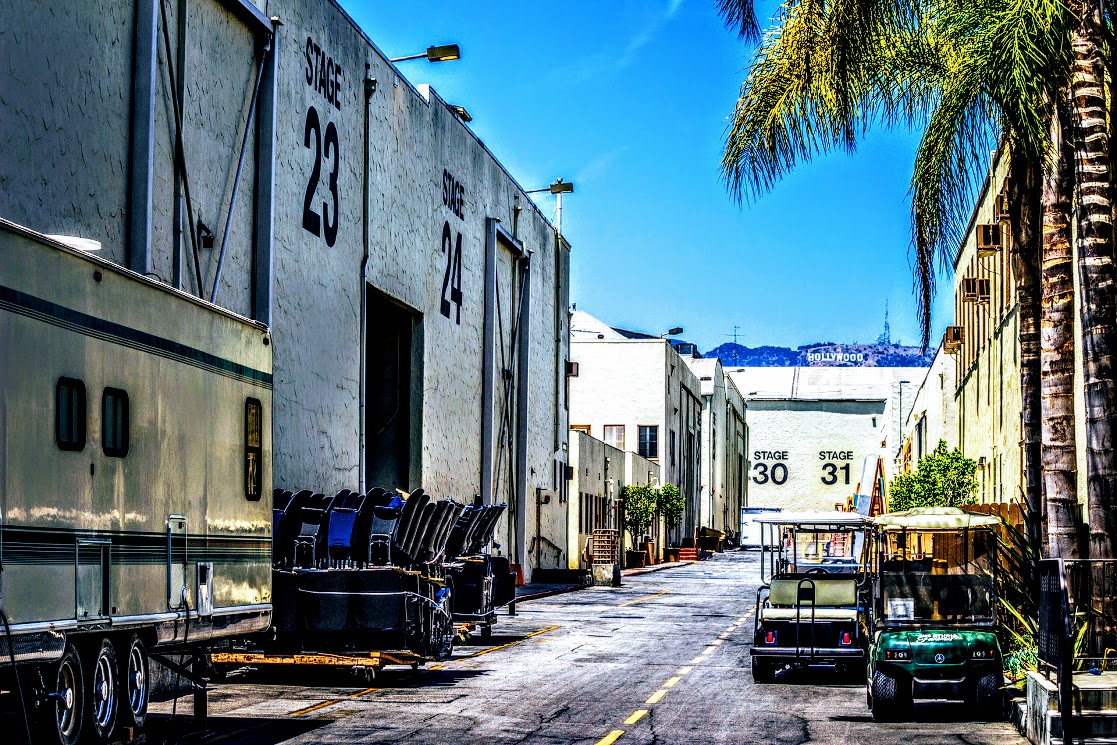 [ This photo is in the public domain. ]
Ian M Macdonald·
Short Fiction

As Amy walked down the long, surprisingly industrial corridor (she was not used to film sets, TV studio warehouses and the like) there arose the first pang of worry about what she had signed up for. She had been excited previously and not even given the morals of the operation a thought; like how the station’s political leanings might or might not correspond with her own liberal ideals. But now that she could hear the excited whispers and giggles of the audience, and around the corner see the intense glow of the lights like those that were shone onto pained faces in old spy films, she swallowed down a surge of nausea.

Outspoken sometimes in her work, which verged on the pornographic, in real life she was quiet, thoughtful, endearingly shy. What if they asked her for intelligent opinion on the anti-Semitic charges leveled against the shadow cabinet back home? Or worse, what if they brought up the complaints on Twitter or the various opinion pieces that had been written about her work, how she was a “bad feminist” and the like? Would she blush and feel that familiar choking lump in her throat, or would she decide to speak and ramble incomprehensibly? She was bad enough making small-talk with the local greengrocer, let alone trying to explain her political leanings and feelings about equality and sex and all those isms. Like Marxism. Did she even really know what a Marxist was?

As she stepped out onto the set beneath the lurid fluorescent lighting (which even at its lowest levels usually made her want to vomit) the feeling of superiority that came with being blonde, slim, and politely British – relatively sophisticated – seemed to melt away and instead she simply felt anemic, timid and proper, in a dull way.

The floor manager pointed and she walked nervously towards the sofa as the audience’s murmurs grew louder… no, that was her imagination, they didn’t have a clue who the hell she was, she doubted the type of American who came to late-night shows like this even read literature, let alone fucking poetry. She was filler. She had caused mild unrest on Twitter, she had good legs and her agent knew the show’s producer. She regretted not having the third vodka. She regretted not being more interesting and exciting, being the sort of person who would make a scene, perhaps by pulling out a hip flask in the middle of the interview and taking a long pull on it. But the hip flask was in the cupboard at home, probably dusty and musty smelling, because she could never bring herself to be that kind of electrifying fuck-the-world-type drinker, despite her certainty that actually it would make everything so much better if she were.

She sat on the sofa and squinted up into the lights, where she could just about make out a man dressed all in black as he navigated girders, a cable trailing behind him. The host, behind a desk made of deep, lush mahogany, was muttering and flicking through his cue-cards and she couldn’t work out if he was actually speaking to her until he said, “This is your first time, right? Don’t worry. You’re just the warm up act honey, when Tom comes out after the first break you just move over there.” He motioned to the far end of the long, brown leather sofa she was sitting on, and then he made an unsubtle scan of her thighs.

She pulled down the hem of her smart black dress, feeling like a 16-year-old at her first catering job.

“And don’t say anything unless me or Tom invites you to comment,” the host continued. “You like Tom, right? Everyone loves Tom.”

Here, he winked at her and she began to feel the familiar dampness under her armpits and she cursed this malfunction of her body; the fluid would have been of so much better use inside her sandpaper-like mouth. She nodded at the host, but she wanted to shrug. A roar of whoops and claps ascended.

The next thing she knew there was almost total silence and she noticed that the greying host had one of those incredibly fake, wide smiles on his face; expensive American dental work shone in the studio glare, which seemed to have been wrenched up another notch so she wanted to shield her eyes. He was saying something to her.

“So, is this collection your attempt to break America?”

“I… well, that’s my agent’s idea…” she said without really thinking, and she was surprised to hear laughter, forced perhaps, from the audience.

“It’s okay honey we love the British! Especially the blonde ones!”

More laughter, much louder, and she was ashamed to find herself smiling bashfully, fulfilling that meagre, typical role expected of her.

“Sorry?” she said, taken aback at the directness.

“Sex sells!” the host cried loudly, looking to the audience for approval and they gave it, whoops and wolf-whistles peppered the laughter.

“Well yes I hope so,” she said once the noise had died down, “I have a mortgage to pay off…”

More laughter, and the words from the most recent opinion piece flashed through her mind; Amy Artemis seems to be infatuated with outdated Mills and Boon type modes of erotica, and the odd mention of premature ejaculation and male subservience doesn’t change the fact that she is still exploiting women for what feels like book sales, rather than any particular challenge to the patriarchy.

Why was it up to her to challenge the fucking patriarchy?

“Some of it has caused quite some controversy,” the host said, and she dreaded what was coming next. “In the UK at least… do you think the USA might be less coy than a country that once put covers on table legs because they look too much like male-members?”

“That’s a myth about the Victorians… it’s not really true…” she mumbled. Why had she not drunk more vodka?

“It’s ok honey I’m only messing with you. So, before you wrote fiction, now it’s poetry. Why the change in career?”

“I don’t think poetry and fiction are mutually exclusive…”

“What does your boyfriend think of the sex stuff?”

“Well, he says he likes what I write. Does it matt…”

“I just worry all those descriptions of well-endowed men would make him feel inadequate! Unless he’s the inspiration?!”

The laughter now just seemed to fade up and down like waves breaking on a beach, a storm building.

“Well I haven’t really got around to what’s next yet, sometimes that takes a little time…”

“This is your book,” the host said, holding up a copy and Amy moved her gaze to the cover.

“High Heels in St Mark’s Square, 11am. Quite a mouthful. Some fans didn’t like the fact you moved away from the alliteration of your titles, did they? Some people were pretty angry on Twitter.”

“I try not to… I don’t pander to Twitter, but I sometimes regret abandoning that… it was kind of… my thing, I guess…”

“Well, what’s in here is certainly my thing! Let’s have a read. You suggested a different one, but I want to read Grainy Sex Tape, Stolen. Not just because it’s the shortest one!” The audience laughed again as the host opened the book. “I’m joking of course, I love this stuff!”

It was the shortest one. The audience clapped appreciatively and it was only then that Amy realised the words “laughter”, “applause” and possibly “giggle coyly” were being flashed up on a huge screen facing the audience above the stage.

The host cocked his head began to read Grainy Sex Tape, Stolen, putting on a high-pitched “sexy”, British voice to do so. The audience laughed. The poem was about an elderly couple watching a somewhat degraded videotape of their younger selves fucking in various positions, which had been filmed by their friend with an old, boxy, 90s home-video camera. They had just attended the filmmaker’s funeral and now they were wanking together on the sofa. It was supposed to be somewhat affecting.

Amy looked over towards Jonny and he raised his eyebrows and bit his fist as if in physical pain. She leant towards the host, flicked her eyes towards the audience, and then back to the host.

“Um…” Amy said abruptly, loudly, and she was surprised to find the host stuttered his way through the word LUBRICATION, and then he fell silent. “Why are you putting on a girl’s voice to read my poetry?” she said. “Would you put on a man’s voice to read Hemingway?”

There were a few uncertain chuckles from the audience as the host frowned, but then a noise like a foghorn swelled from the side of the stage. She knew this sound very well, she looked over to Jonny as he moved his hands up to cover the eruption from his mouth, but he could do little to stifle it. The floor staff glared at Jonny but he couldn’t stop. He laughed quite like a seal; huge, hyperventilating intakes of air followed by bellows which faded into machinegun-fire chuckles as he ran out of breath, and then the whole sequence of laughter and air-intake repeated. She had last heard him laugh like it a week before as they re-watched the entirety of The Office in bed for like the sixth time since they had been together.

Amy smiled, bit her lip, and pulled again at the hem of her dress. The host placed Amy’s book of poetry down onto the fancy wooden desk and scowled at a member of the crew, and then he passed a flat hand twice across his throat in a cutting motion. The host then picked up Amy’s book again, and once Jonny had managed to silence himself, he began to read the poem in his regular voice, somewhat disinterestedly.

“…the tiny but nonetheless tempting appendage belonged to their best friend, which he stroked tenderly as he filmed their throes…”

Amy put a finger against her lips as she smiled at Jonny. She wondered if her quip would make the edit and even if it did, would it be enough to placate the opinionists who thought she should be doing more for whatever cause they deemed every single artist should be supporting?

But she found herself caring little, as she listened to the rest of her poem being read morosely by this middle-aged American with more makeup on than she had. Whatever: she and Jonny were on an all-expense-paid trip to LA in springtime. To hell with everyone else.