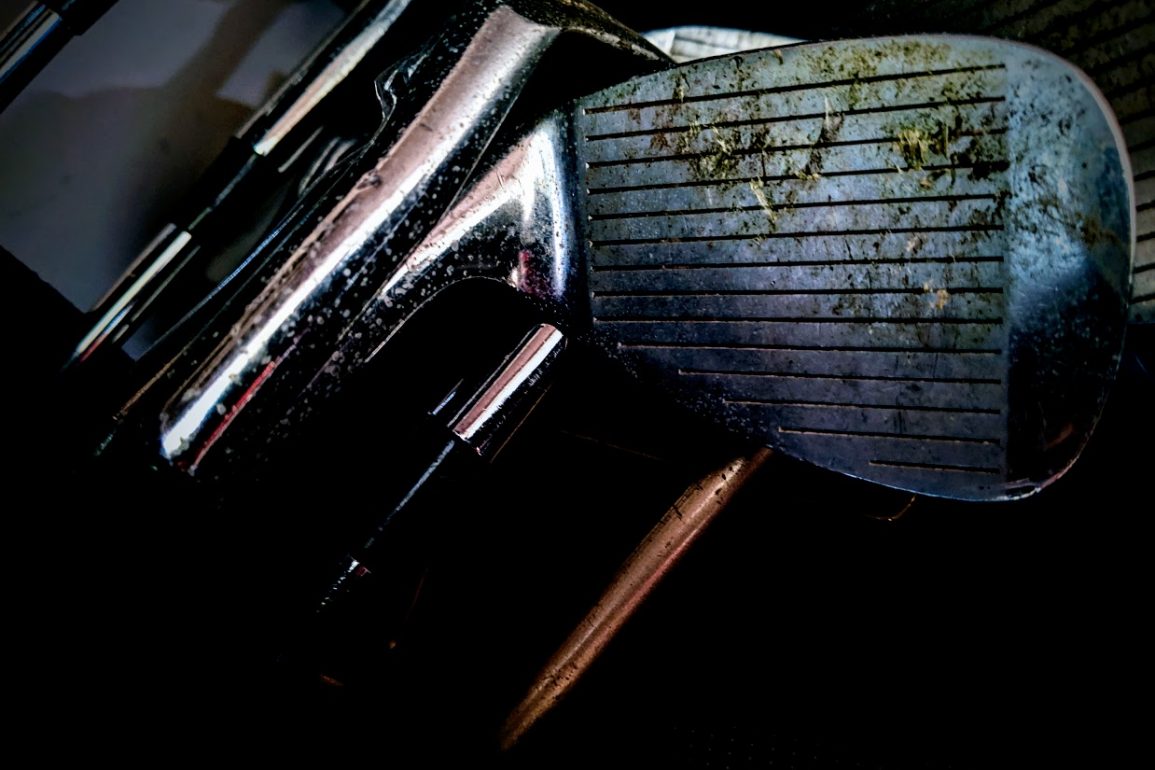 More and more he was traveling to a familiar place in mind and location and to others sort of like him and the high speed at which he was traveling spooked him. The question: was golf it now? Was this his heart and soul now? Forever? Golf? Retirement golf every damn day?

He had good friends who had already arrived, but he wasn’t sure they were miserable yet.

The likely answer frightened him … it might make him feel guilty. Why? Four kids through college. None of them too weird, on dope, pierced in odd places. He was already a multi-millionaire. Wife happy with her stuff. At sixty-six, sitting in another new Land Rover, she beamed like a teenager. The thing cost as much as the starting salaries he had to pay the young hot shots. Three months later they said they needed more or they’d take it elsewhere. Things getting out of hand. Or feeling like it.

At home, maybe too much scotch at night. Definitely not pleased with the belly, the second chin. He was recently on the cover of a business magazine. The congratulations lasted for exactly two weeks then stopped. The quick flash of fame made him feel strange. The article mentioned he played golf. A lot.

Worn wood steps, six of them, leading up to the higher place, the first tee. Steps with rubber coating, metal-capped noses. Were these longevity devices needed anymore? What with the plastic spikes everyone was made to wear. Why not just plain old wood now? Sort of a cozy thing. Grow a little moss on them.

Discovered he left his phone in the men’s grill. Heart surged for a moment. Hey, who cares. Didn’t know why he had the damn thing anyway. Clients liked to call him on Saturdays. In his car. These days business knew no hours. If you wanted to do the deal you had to be available. Monday through Friday for that seemed okay to him. From the old school, and not apologizing for it. And voice mail. A good thing if you used it right. Get back to me on those two items and if I’m not available just leave me a message. But they’d call you back and only say they were returning your call. Everyone has an idiot in them. Made no sense. Back from even a short lunch and you had sixteen of them. Didn’t know what bothersome technology was next.

Not a new ball left in his bag so he used the one from last Saturday. Always made him feel a little unpolished. On the first green, when balls are intently observed as they got nudged back and forth, you’d get asked, Is that the ball from last week? He looked at it in his hand. Week old memories. Cart paths left the best ones. The big bounces. The jokes. Path wedge.

Gone into the woods.

The Chinese restaurant last night. Always too much food but you had to crack the cookie at the end even if you didn’t eat it. Always tasted like Elmer’s Glue anyway. Prepared for the usual, he got this instead: FLOG IS GOLF SPELLED BACKWARD. He must have made an expression.

“What?” she said. “Looks like you got a good one.” Hers said, YOU’LL KEEP DODGING THE BULLET.

“That’s not exactly what I asked, exactly.”

He crumpled the fortune up and tossed it onto the table. When she waved at the waiter he grabbed his fortune and slipped it into his pocket. Couldn’t believe it. Years of Chinese food, and nothing like this. But it wasn’t really the Chinese who wrote these things. More like stand-up comedians with twenty-five characters allowed. This made them work harder for the kicker. Not much room for that sex humor they were spewing out these days.

She waved a hand in front of his face. “You’re not all right.”

“You think about golf while you’re having sex?”

She lifted an eyebrow. She lowered her old voice. She surprised him: “Yes.”

Nothing was higher than the clubhouse, except the first tee. Other tees weren’t so glamorous once you got out there. This one coated with ryegrass for winter play. Mower lines gave an impression of lining it up. Getting it together. A competition about to begin. He never knew where the ball would go. Not one hundred percent. It would go in front of him. That was ninety percent of it. But then, who knows? Had heard pros didn’t know all the time either. When you think about it, every shot pleases someone. He glanced at his watch. Teeing off a little late, as usual. But he couldn’t think of anywhere else at that moment he wanted to be.

Walking off the eighteenth green he was told that he wasn’t himself today.

No, an eighty-two is just about right. A putt here and a chip there and it’s a seventy-nine.

Not what he was talking about, but didn’t press. Men respect each other’s time in the cave.

In the men’s grill a waiter gave him his ringing phone.

“Are you coming on home?”

He dropped into a chair. “I don’t know.”

He gazed out the window at the fairway of the ninth hole. Caddie racing after a divot. Pine tree shadows made a skeleton scene. He finally said, loudly enough where his old friends heard him, “I love you, too.”