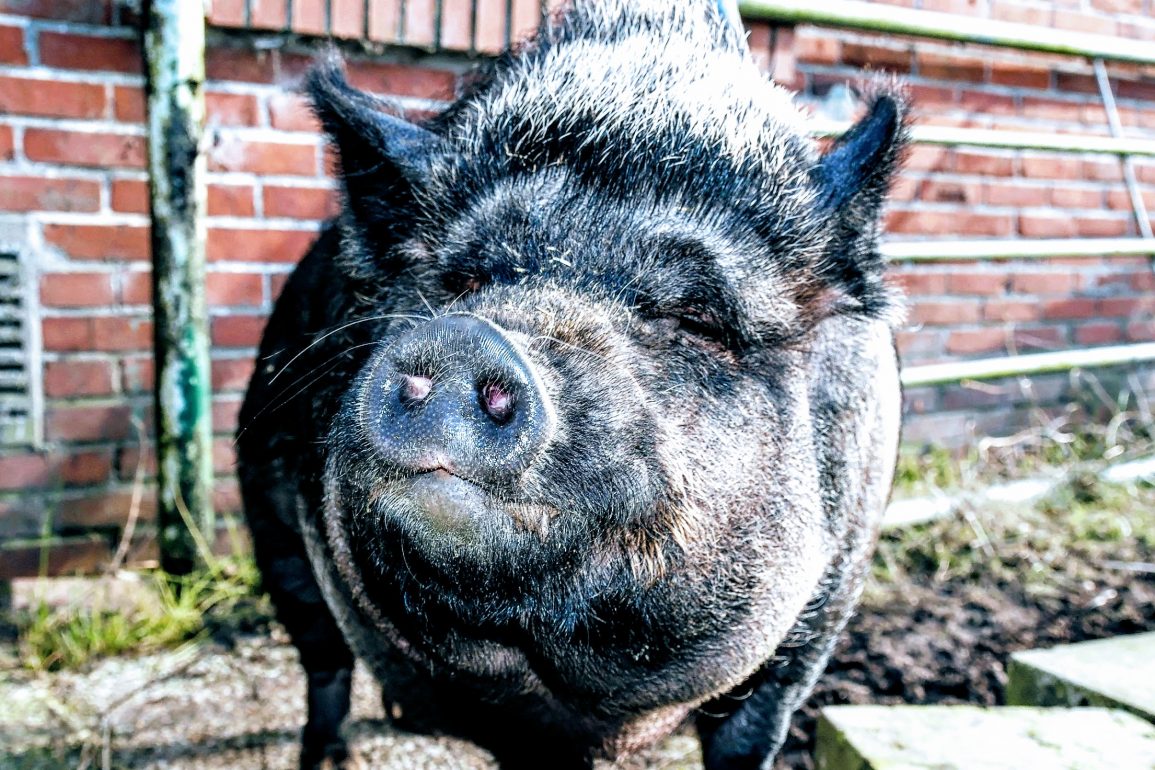 This photograph is in the public domain.
Megan Hoffman·
Creative Challenge WinnersShort Fiction

The apartment was too small for the pig. He knew that it was, but his girlfriend would not go home without it. He sat on the bed wedged between the stove and the bookcase and stared at the fat little beast as his girlfriend rubbed its belly. They had gone to the Union Square market to get organic arugula. Maybe some eggs from the guy with the Amish beard. They had come home to the four hundred square foot apartment with a pig. A pig. He had only walked away to buy her a bunch of lilacs. She loved lilacs. He was gone for a moment. Less than a moment. The rescue group had her pegged the second they saw her. The beanie cap. The yoga mat over her shoulder. She was an easy target. What was the thing about pigs and markets? This little pig went to market? This little pig stayed home. Home in his tiny ass apartment while his girlfriend rubbed its goose-fleshed belly. Marigold was calling it Harry, which was certainly not creative or ironic enough. He sat there. His whole life flashing before his eyes. It would all start with this pig. Then kids. Then death. Marigold was getting her things to go to class, filling her rolling bag with paints and pastels. She was leaving. She was leaving him with the pig. He felt her lips on his forehead. She smelled of pig. A warm meaty smell. The click of the door. He heard her bag rolling down the ramp to the street. The pig grunted and rubbed his snout on his grandmother’s antique rug. Marigold loved to start her day on that rug. Yoga then sex. It was the perfect morning routine. The pig lifted its tail and began pissing on the rug. Pissing on the antique rug. He jumped from the bed and caught his toe on the bookcase, tumbling to the ground and knocking over his half full coffee from earlier. The pig darted across the apartment. Who knew pigs could move so fast. Its toes clicking like heels on the hardwoods. He pulled himself up and limped to the shelf for paper towels. The stink of the pig urine seeping through the space. His toe was bleeding. The pig snuffled about pushing the chairs around sniffing the floor. The table tipped and the wine bottle they had polished off the night before rolled to the floor and shattered. He cursed as he stepped toward the rug and felt the glass tear into his foot. Blood smeared on the floor as he knelt down to sop up pig urine. The pig kept sniffling and snuffling in the kitchen as he scrubbed. He heard clicking and then he felt the bite. It was fast and deep. He couldn’t even scream. There was no time. What do you do when your girlfriend’s new pig is eating your foot? He pulled and the pig bit harder. He heard the pig ripping and tearing. The pain and the sound of the pig smacking made him vomit. He vomited on his grandmother’s rug. The door. The door was just past the fiddle leaf fig. He had to get to the door. The pig had climbed onto his back in a frenzy of bobo bloodlust. The door. He took spin classes, he had butchered pigs in that “Meat Packing in the Meat Packing” class Marigold got him last Christmas. She had also gotten him a legit knife set and a leather apron. He would not let this fucking pig eat him on his grandmother’s fucking rug. The pig decided it was time to go for the jugular. Oh, this little pig had roast beef. He was soaking wet. Pig urine mixed with his blood made one hell of a stench. Belly full—wait, was that a smile on its face? Or some sort of satisfied sneer?—Harry the Pig snuffled open the door Marigold had left ajar, climbed down the ramp and set off to explore Manhattan.

EDITOR’S NOTE: This story was selected from entries submitted to our Creative Challenge Series #48: Last Sentence, which required that the last sentence in the text must be used as given.