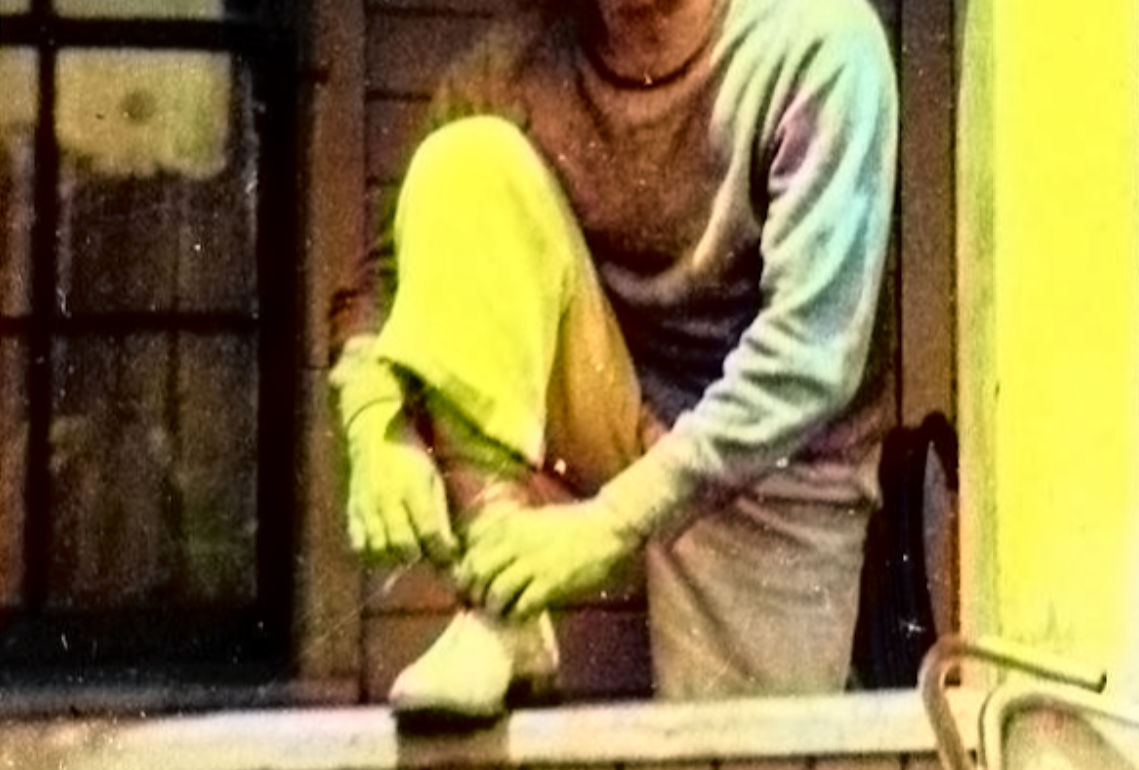 Unobtrusive by design, the rotary phone squatted on a middle shelf, in the fourth aisle of the antiques mall, over a box of Herb Alpert LPs, by an electric knife, five red glass tumblers, and four cups on three matched Stanglware saucers. He almost passed by, as he had the paintings of boulangeries and Dutch canalsides, mildewed mysteries, a six-point buck’s head, cabinets of costume jewelry, scuffed end tables, beer cans from dead brands, mid-century consumerism’s detritus.

The telephone crouched on rubber feet, weight low like a wrestler, ready. It wore black like a puritan, proud to be plain, disdainful of color, screens, portability, secure in its election, confident in its focused functionality.

Its heft surprised him: indestructible plastic, steel, brass bells, copper insulated in yellow, red, white. It was a late model, cable jack in back, mate to one that had sat on his physician father’s side of his parents’ bed and so often called him away.

The handset had balance and weight. He put it to his ear and listened to silence.

On impulse he took the telephone to the front, where fall sun came in many colors through salvaged stained glass. He put it on the counter beside spray bottles of orange oil and a box of pamphlets from the Victorian B&B on the hillcrest.

“Does this work?” he asked the clerk.

It was an antiques shop after all, so of course she had a landline. She plugged in the cable.

He listened to the dial tone hum, that reassuring sound of childhood connectivity. He put a finger to the dial, then hung up.

He found a cable in the back of the kitchen drawer, still coiled and wrapped with his ex-wife’s twistie. He took the phone to the bedroom and found the jack behind the bed frame, veiled in dust. He strained his shoulder reaching between mattress and headboard to seat the plug. Then he paid out cable to the bedside table.

The phone sat, constant, patient, ready. He listened again to the dial tone, thought a bit, then went away.

He was watching the news on PBS when it rang. Even downstairs, the sound of matched bells broke through a report on illegal migration, paired pure tones from days before telemarketing robocalls. He waited for the caller ID on the portable kitchen phone, its dead digital voice announcing “out of area.” The brass bells seemed to reverberate even after the computer on the line’s other end had killed the call.

He enjoyed the bells, ringing resonant of childhood and youth. That standardized sound had broken up the dullness of life: friends asking about homework, his grandmother calling weekends with kisses for the kids, his father’s answering service summoning him. Away from home those Western Electric bells had rung for clerks scheduling job interviews, lovers arranging assignations. They’d been the first bells to toll for his father, when his mother called to announce his father’s death. Now no one called, only recorded voices, scripted salespeople, automated reminders of dentist appointments, wrong numbers—the bells rang cheerily for all.

He’d bought a $12 bag of Butterfinger and Crunch, downsized from the days when he’d trolled suburban streets with a paper bag. On Halloween night, he’d drunk two double bourbons while the doorbell summoned him to serve ghosts and princesses, Goth teens, pirates, ballplayers. Some were young enough to thank him.

He killed the porch light after seven and was asleep by half past eight, but he woke before ten. He poured another glass of bourbon, poured it back into the bottle, looked in the refrigerator, found nothing.

He tried lying in bed but couldn’t sleep. The bedside clock showed 12:11. He picked up the handset of the antique black telephone and listened until the dial tone’s hum broke into fragments. He set the handset down and picked it up again, cradling it in the angle of his right shoulder. He set a finger into the dial and pulled against the tensor. The number came back from childhood memory: 682-6893. Released, the dial spun eagerly, ticking off digits.

Down the wire, he heard clicks of connection, then the ring.

It was his father’s voice, the doctor inside the sleepy man awake, intent, professional. He heard blankets rustle, the lamp’s click, his mother’s protest.

He thought of what to say. What to tell the father who’d been dead for a generation, what to ask? He found himself utterly unprepared.

He closed his eyes, steeled himself.

He felt a need to sit, so he went round the bed to sit at the desk chair. He heard his father’s fingers drumming on the bedside table.

“What?” That was his mother’s voice, husky with sleep, sexier than he remembered. “Who is it?”

“I wanted you to know,” he ventured at last, thinking of the heart attack that would leave so much unsaid, of the vigil in the coronary care unit where only the ventilator dared whisper, of the line of former patients out the door of Newell’s Funeral Home and down the street beneath gnarled maples and past the gates of the old high school. “It all works out,” he said. “In the end, it all works out.”

His head was clogged with questions: so much he wanted to know, so much to ask. He hungered for counsel, consolation, condolence. But he knew better. He heard his father’s protest die as he cradled the handset.

He pushed the headboard away from the wall, drew the cable from the jack. The telephone sat on the nightstand: unpretentious, resolute, impassive, ready. Three weeks later, he took it to the basement, left it between the stainless-steel percolator and a 35mm Konica that still held four photographs on Kodachrome of him as a much younger man, when he’d still been full of potential.