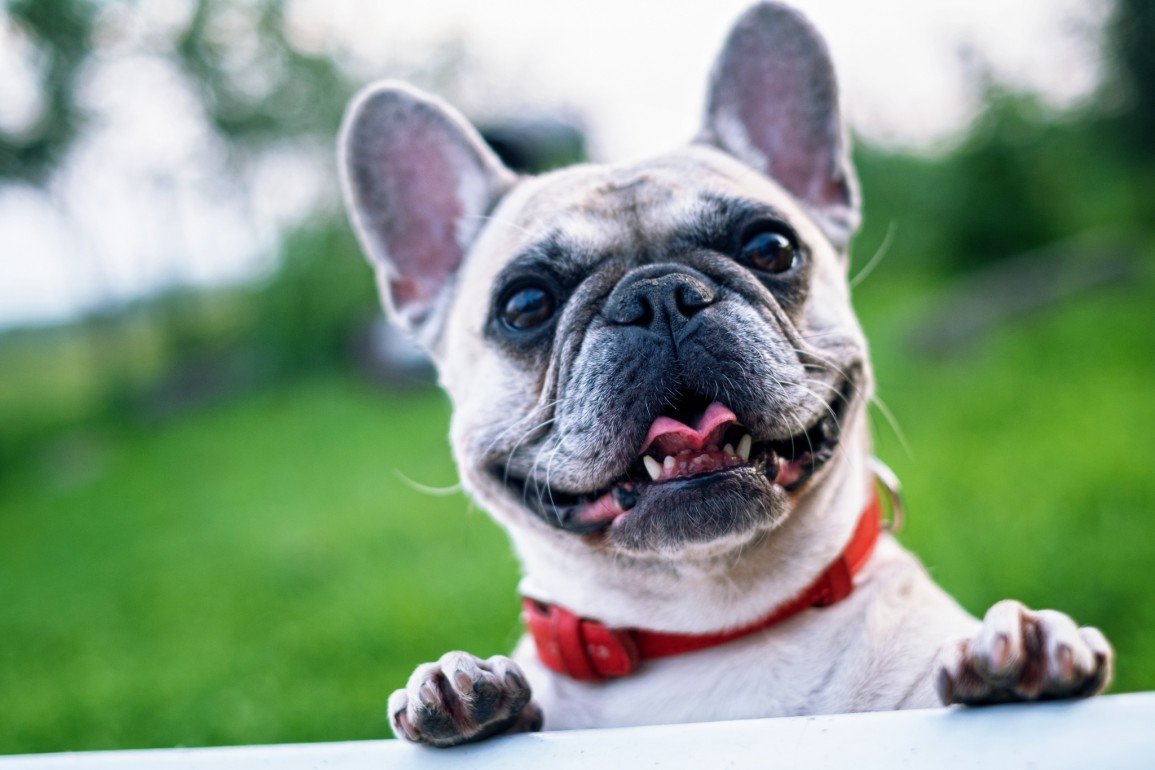 [ This photograph is in the public domain. ]
Allison Futterman·
Creative Challenge WinnersShort Fiction

He was telling his wife how much he loved her, when his dog suddenly said, “Bullshit.” This wasn’t the first time Scott’s dog, Max, had expressed this sentiment.

There was the time they were leaving the pet store, after Max had just been groomed. Max greeted his owner happily, tail wagging, full of kisses. “I hope you took good care of him,” Scott said to the groomer.

“I sure did,” she said. And then she bent down and spoke in a baby voice to Max. “Didn’t I take care good care of you, sweet boy?” she said. “Didn’t I?” she repeated, her voice going up an octave.

When Scott was single, he had a neighbor who would occasionally drop off food for him. “You probably don’t get too many homemade meals,” she said, the first time she brought something over. One day he ran into her when they were both getting their mail. “I hope you enjoyed the lasagna,” she said, referencing her most recent delivery.

“Bullshit,” said Max, who had been the recipient of a bite that Scott had given him.

There were other times over the years. Sometimes it caught Scott by surprise, and other times, he could feel it coming. Like on his wedding day. He knew his then-fiancé didn’t really like Max. “More of a cat person” was how she described herself. She tolerated Max, for the sake of the relationship, but she never gave any more than the bare minimum.

On the day of the wedding, Max was outfitted with a bow tie. Scott was not the kind of person to dress up his dog. But this was his wedding: the day his life would change forever, and Max was his best buddy. He wanted him there. She did not.

“Okay,” she said, when they had discussed it. “If it’s that important to you.” At the reception, everyone loved Max. And he loved being around everybody, as his nature was naturally friendly and affectionate. A couple of times, Scott caught her looking at Max with revulsion. Pure disgust. But what she said was, “You know, Max has really grown on me. I’m glad he’s here.”

Of course Scott thought it was strange that this was the only word Max ever said. And for some reason, nobody else could hear it. But he could. It wasn’t telepathy. It wasn’t intuition. It was the actual word coming from Max’s mouth.

As time went on, Scott got frustrated with this. He kept thinking Max would stop, but he didn’t. In fact, as Max got older, he said it more—like a surly senior elderly person who didn’t care what anyone thought.

The woman who became Scott’s wife never grew to love Max, only to resent him more. She suggested giving him up several times. First when they got back from their honeymoon. “We’re starting a new life, let’s start it with a dog we pick out together.” Again with each of their three kids. “I have enough to do without having this dog to take care of.” The last time was when Max started requiring more medical care and effort. More money, more work. “I’m just not into this, Scott. It’s enough.”

Scott wouldn’t hear of it. He hated that fact that he was generally a pushover with her, but on this subject, he would not budge. Although he always told her to drop it, because he was never getting rid of Max, he sometimes resented his dog. This dog, he would think to himself. He’s caused grief in my life. In my marriage. And he won’t shut up.

One night Scott was arguing with his wife. It was just the regular stuff of married life. The little things that build up and get on people’s nerves. The things people try to ignore or stuff down until it finally comes out when least expected.

His wife said she was tired of fighting over the same things, and suggested that maybe they should separate. The idea both relieved and terrified Scott. But since he was the kind of person to give in to fear more than to pursue the unknown, he quickly decided to try to salvage the relationship. He begged his wife to give him another chance.

It was then, in the middle of expressing his love for her that Max said it. Scott became filled with rage. Why, why did he have to say it? The worst part was that Scott knew his dog was right. It was bullshit. He didn’t really love her anymore. At least, not the way he was trying to convince her that he did. But he hated that Max had to say it.

When Scott’s wife walked out of the room, Scott sat down on the couch and Max came over to him, nuzzling him, trying to comfort him. Max tried to jump up on the couch to cuddle, as he had done for as long as they had been together. But he was too old and not in any condition to make the short leap up. So he cried, and he looked at Scott with sad eyes pleading to be picked up and held.

Instead Scott looked at him and said, “You know, Max, I’m sick of this. You don’t know when to be quiet.” And though no words were spoken by Max, the feelings were unmistakable. His face took on a forlorn look, and silently implored Scott to stop. To go back to the Scott he knew and loved. “Actually, I think on Monday I’m going to take you to the shelter. Let you be someone else’s problem from now on.”

But Max knew Scott better than anyone did. Even better than Scott knew himself. So when Scott threatened this, Max sat very still at his owner’s feet. Licked his leg. Gave a tiny, hopeful wag of his tail. And said, “Bullshit.”

EDITOR’S NOTE: This story was selected from entries submitted to our Creative Challenge Series #37: First Sentences, which required that the first sentence in the text must be used as given.