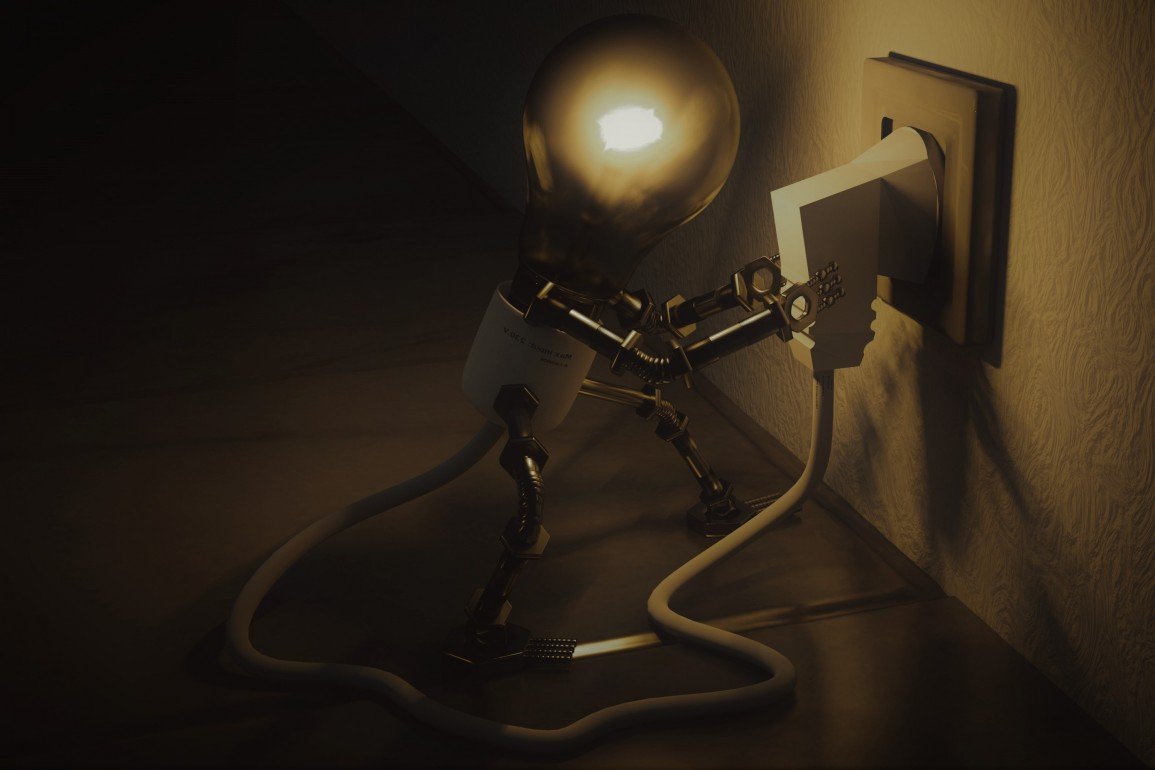 [ This photograph is in the public domain. ]
Stephen Ground·
Creative Challenge WinnersShort Fiction

A flute, a base, a bare Edison – love at first sight.

He paid sticker price without hint of a haggle, and the dealer gladly took his cash, wrapped it in paper then a plastic bag. It would be perfect with the rest of his collection – a green-and-gold banker’s, wood with woven shade, liquor bottle, diver’s helmet, and a pair that’d belonged to his great-grandmother, crimson red and tassels plucked from a stagecoach-cum-brothel, to name a few. He arrived home and made space in his office, where he could gaze upon it with maximum enjoyment. He fell asleep in his wingback under its gentle light, book resting like a sleeping infant on his chest.

He was preparing lunch the next day when he noticed the new lamp twinkling in the office. Certain he’d turned it off that morning when he woke, he turned it off again; ate his toasted tomato sandwich and drank his glass of milk, washed the dishes, limped to the post office and checked the mail, stopping on his way home at the grocer to buy a steak, two potatoes, and a bottle of wine for dinner. He clomped up the steps with a fist of bills and his paper bag dinner, dropped the former on the table and the latter in the fridge, then sunk in his recliner to relax after a productive afternoon. He closed his eyes and put his head back, but could feel someone watching – the flute lamp glowered, bare Edison bleating brightly. He turned it off and closed the door.

After dinner, he cleaned up then sat to drink the leftover wine – something he did once a week and once a week only, but never missed it. As he contemplated his last half-glass and drunkenly longed for next week, he noticed a light creeping under the closed office door. Lubricated by merlot, he burst inside and flicked the switch, but it was already off. He cranked it up and down as fast as his arthritic fingers could, but the bulb did not waver from its brightness. He ripped the plug from the wall, and it shone. Terrified of losing his mind like his father but drowning in evidence, he unscrewed the steaming bulb and shattered it in the kitchen garbage, then cast the flute on a pile of mismatched shoes in the bottom of a closet and slammed the door.

Emergency wine tomorrow, he muttered, wiping sweat from his brow, stumbling to bed, closing the door, falling asleep in his clothes.

He knew it was there before he opened his eyes.

He wasn’t sure how he knew; call it a lifetime’s intuition, but he knew it was outside his door, and not because it was singing notes, but caustic, abrasive light.

Breath shallow, he peeked and sure enough – a bald, yellow glow slithered under the door like carbon monoxide, and he didn’t know what to do. He couldn’t run, it was in his way. His only option was to fight – struggled to his feet, a half-drunk septuagenarian with two replaced knees and double plantar fasciitis. He staggered to the door and swung it quickly, raising fists like when he was a boy – the flute sat, unplugged, hollering light from its bulbless fixture. He roared, lifted it over his head and brought it down heavily on his knee, collapsing as the flute broke at the tenon between middle and foot. Sprawled across the floor, the light still poured – he crawled to it, electric glow bursting from shattered middle. He fought to sit, cradling the broken but blaring flute, howled, then chomped the cable running the length of it, fixture to plug. The moment teeth broke casing, he popped like Las Vegas from space – smoked, shuddered, slumped across the floor. The light from the flute flickered off.

A neighbor saw the burst of light while they were outside sneaking a smoke before bed, and called the police after her second dart. Two officers arrived and checked the outside of the house – nothing to see. They knocked, and after no answer forced their way inside.

Jesus.
What the hell happened?
No idea. Is that…a lamp?
I think it’s a flute.
No, it’s a lamp, he said, shining his flashlight. See? It’s got a plug. The bulb goes there.
Who in their right mind would make a flute into a lamp?
Lotta sick bastards out there.
A pause.
My wife would love something like that.
Mine too.
Too bad we can’t take it.
We could. Couldn’t we?

EDITOR’S NOTE: This story was selected from entries submitted to our Creative Challenge Series #33: Last Sentences, which required that the last sentence in the text must be used as given.