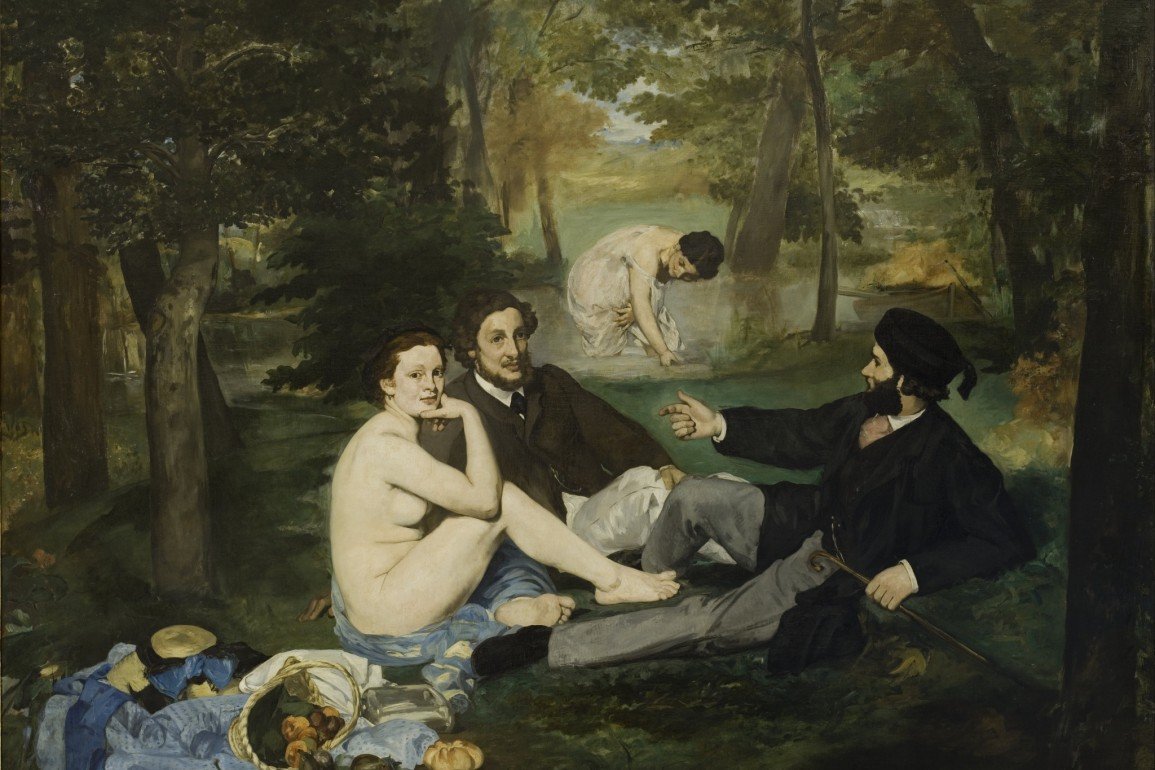 [ This photograph is a faithful photographic reproduction of a two-dimensional, public domain work of art: Edouard Manet's Le Dejeuner sur l'herbe (The Luncheon on the Grass). ]
James Mele·
Poetry

You can’t resist the humor of the notion
The painting could be Burroughs’ inspiration for Naked Lunch.
This cantankerous conversation with the history of art
On the face of it strikes you as some kind of joke –
It seems more some wag’s surgically witty snipe
At the libertine French than a scene with serious intent.
Two gentlemen buttoned up tight in their frock coats
Lounge on the grass in a shady, secluded spot,
More or less ignoring the casually naked woman
Who sits like a triangle’s corner in profile to the left,
Her head turned away from them, propped up by a thumb.
The elbow of her crooked arm rests on a knee
Drawn coyly, it seems, close to her breast.

The sport on the right in his funky tasseled hat
Gestures with his hand, index finger crooked in her direction,
Offering her, perhaps, as an elucidative example
As he appears to expound some weighty theory to his friend,
Who is clearly not paying attention, distracted as he is
By some invisible person beyond the foreground,
A leisurely walker in the woods, maybe, who has
Stumbled upon their picnic and gapes at them in disbelief.
You detect a slight sheepishness in the fellow’s expression
That suggests he feels caught out and compromised
By the licentious company he has been seen to keep.
Or is it irritation with a voyeur’s gaze on his companion?
The woman, not a literal elephant in the room, but amply fleshed,
Seems more amused by the intruder’s attention than offended.
She looks him straight in the eye, you get the impression,
With a certain brazen pleasure in the shock of his reaction.
You think convention must have long ago
Lost any claim it might have had on the likes of her;
She is as free of it and of shame as she is of her clothes.
The picked over basket of fruit and bread lies atop her dress,
Which suggests she shed it before she lunched
Without a stitch on to keep the crumbs out of her hirsute lap.

Behind this group (which in your perverse perspective
Parodies the absurd affectations of worldly sophistication),
A fourth member of the party looms too large at the center.
The woman, a diaphanous slip draped on her body,
Seems to emerge from an aesthetic time machine
As she stands in the shallows of the stream
That bore them all out of the Paris crowds to this quiet.
There’s something classical about her depiction
As if she were an iconic fugitive from an ancient myth –
An old master’s conception of it at least.
There’s certainly a modesty about her demeanor
That contrasts with the boldness of the hussy.
Yet you wonder what it is she’s reaching for in the water
As she presses the folds of her slip between her thighs.
You are open to the possibility it’s just your dirty mind
That nags at you with the hunch it’s a bar of soap
She dropped while cleaning herself up after sex,
But it is highly doubtful she’s trying to bare hand a trout.

In the end you are obliged to entertain the prospect
That Manet, a well-born, syphilitic gentleman,
Whose honest picture offended the Salon and the critics,
Was more deviously clever than you take him to be.
It could be you have been duped, and you are the butt of the joke,
That you are the leisurely walker in the woods –
The prurient viewer the painter has conceived
Standing just beyond the foreground with mouth agape,
Scandalized and fascinated by the scene before you.
Perhaps, it is you, your conventions and your hypocrisy,
The nude’s unwavering stare challenges.