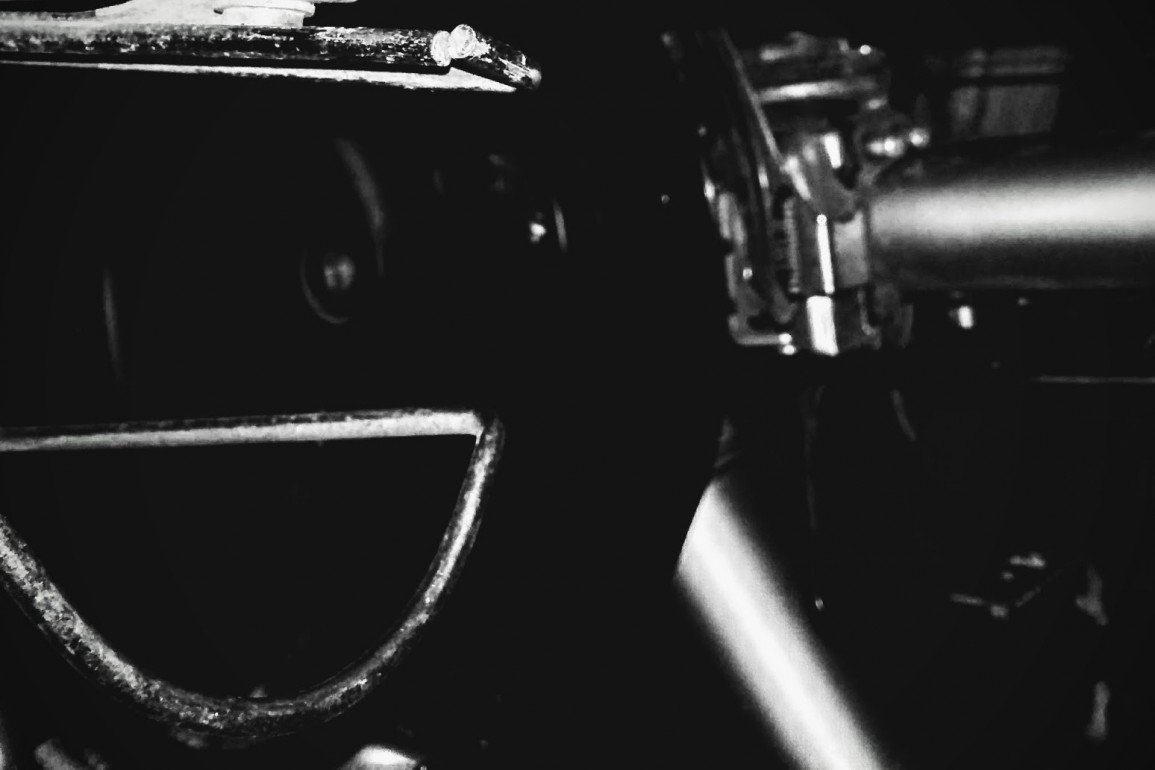 Good Jim would be listening to country music if his dang radio hadn’t got slammed against the east wall of his gas station during that last little tornado. His poor old back is totally buggered too. Well, almost. He sure can’t fix tires anymore.

Jim’s the kind of guy if he’s got extra coffee and you’ve made it this far in a western Kansas blizzard and you’ve got your own cup he’ll fill it to the rim. And on a scorcher like today he’ll give you a drink of ice water—if or when he’s got ice. But today his tired old Norge fridge is cranking barely enough to keep his ring of baloney from sprouting a bed of mold. He’s thinking hard on a couple of fat slices come noon.

Any time of year when customers roll up to his pump they always ask: “How’s it goin’, Old Timer?” Good Jim’ll be slow to answer, then, “Slow—but good enough.”

Seems yesterday two good-looking dolls with Utah plates chug up to his pump driving a filthy hail-dinged ’83 Oldsmobile stationwagon crammed to the hilt (missing a few cylinders and throwing sparks as it drags its muffler). A fat grey-faced yellow cocker spaniel slobbers on a red and grey Indian blanket behind the head of the girl riding passenger side. The girls have fingered their names into the dognose-smudges inside their windows so they can easily be identified by passersby.

Jim lugged his sponge-bucket to their windshield straight off—wanted to look at their pretty faces—not much pretty around these flat dry plains. He watched Stephanie yank twisted rubber bands off her ponytail then shake her dishwater blond hair out like a robin flutters its wings in a puddle of water. She winked at him through the clean window. Loretta R. S. was not so pretty like he’d hoped—her eyebrows too big—her teeth too long. She pooched her lips. Blew him a kiss. Both girls and the cocker, sweatsopped. He washed their rearview mirror (duct-taped to the door) as Stephanie rolled her window down. Stinking body heat almost knocked him off his feet. The fan rattling; the air conditioner off.

“How’s it goin’, Old Timer?” She had a flirty voice—like Loretta Young in the early days of TV.

“Slow—but good enough. Can’t do nothing about your missing cylinders.” The fat cocker curled its lip. Made a rumbling noise—like it came from his ass. “Might as well shut her down,” Jim had said.

“First thing we need our oil checked, Mister,” said Loretta R. S. She pooched her lips again. Jim thought it made her look like a mudfish he’d snagged out of the Arkansas River. He’d always hated mudfish.

He dawdled toward the hood. Looked back at the women. Said, “I’m gonna need ya to pop yer hood.”

They giggled. Stephanie opened her door. “Whaaaaaat?” she said, drawn out and stupidlike. Candy wrappers, dried orange peels, roach clips, a mess of Pall Mall butts, smashed-up Midwest States map and several crushed stuck-together gooey pop cans fell out at Jim’s feet. She threw her long legs in front of Jim, lifted her rainbow-colored paisley skirt above her knees, then leaned to one side so he’d come pop the hood handle for her.

The latch was bent. It took a crowbar and more heft than Jim really cared to dedicate to get it up. The interiors of the wheelwells were decorated with plastic pinkish-yellow roses wired to various strategic mechanisms. Looked like a place of worship. Plastic half-fried from engine heat. Jim thought it a wonder the whole rig had not gone up in fire.

A leather tag, cleverly engraved with words, was attached to the oil stick. He swiped it clean with his red oil rag. It read: ASS FOR GAS!

Jim had a notion to cop the tag to hang it on his cork wall with postcards folks sent to him over the past thirty-five years saying thanks for the coffees during blizzards and the ice water in the midst of deadly heat. He stepped back. Studied the bizarre tag. Slowly and undramatically closed the hood.

“Run along, Ladies.” Good Jim was a gentleman.

“Well then…we need gas,” said Stephanie, shaking her hair out again, dipping her head coyly between her shoulders. “We got to get to Delaware. Summer Theater. Cat on a Hot Tin Roof.” She was so pretty. Good Jim had to turn his head away.

“Gas for cash only around these parts. I make a practice to sell just good gas. None a that water-down junk.”

Loretta R.S. fished into her wet peasant blouse, deep between her long white breasts—came up with two sweaty dollars wadded in a snotty hanky. Stephanie rattled a Coke can—thirty-two cents in nickels, dimes and sticky pennies. “Fill er up,” she said. “Please.” Paused. Blinked her eyes kind of flirty. Then, “Please, Sir.”

The girls became anxious about getting out of there. Didn’t even ask to use the toilet though Stephanie was desperate. She’d find a culvert a couple miles down the road—hope there weren’t too many sand burrs—like last trip when she got stickers tangled in her pussy hairs. Loretta R. S. helped twist her hair into a ponytail then wrap blue rubber bands around it three times. The girls were pissed they wouldn’t be able to use their gas-guzzling air conditioner for another long hot stretch across the barren Kansas drylands. At least not until the next gas station. Probably 50 miles or so.

Good Jim was in a slow dawdle getting to the nozzle.

The pump was slow pumping in the miserable heat.

He was thinking a couple slices of moderately cool baloney would taste good. It was fifteen minutes to noon.

He was thinking it sure would be nice to make just enough bucks selling good gas to order a nice little radio with a good antenna from his PikMart Catalog. Or maybe one of those machines that plays recorded tapes so he could listen to Emmy Lou Harris whenever he wanted to.

And thinking that Stephanie girl sure did look a lot like Emmy Lou Harris.