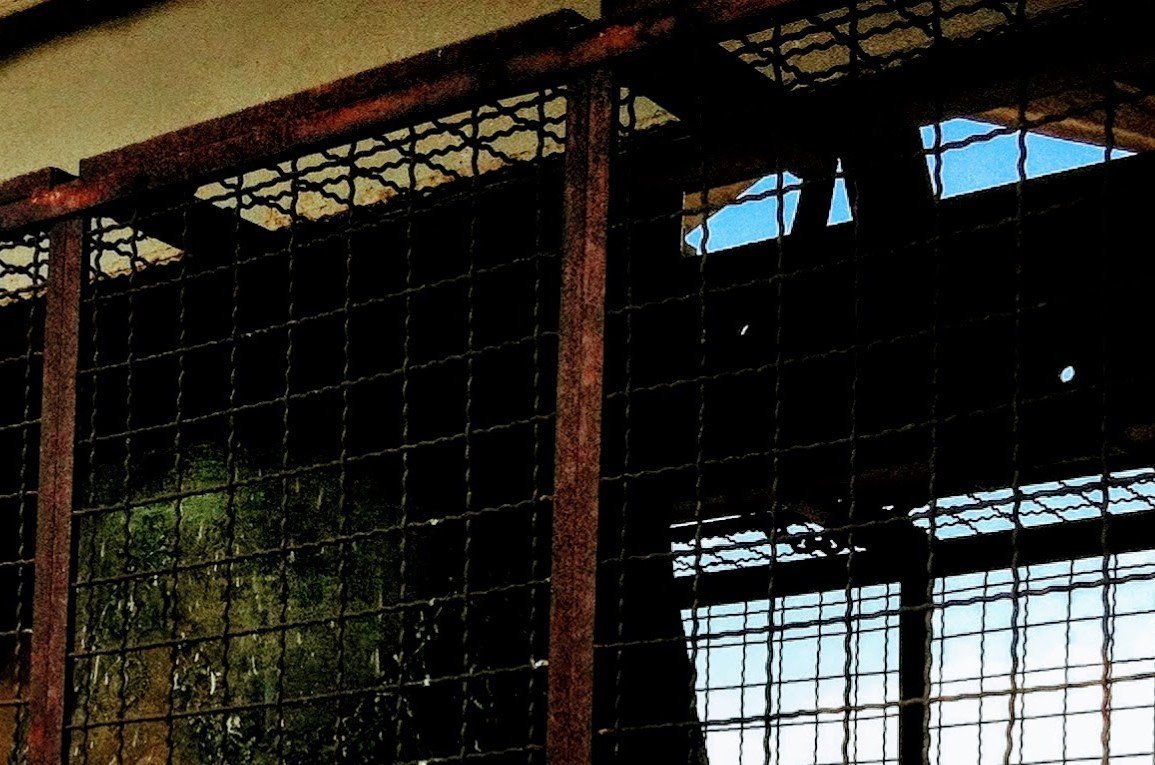 The only light to pierce the worn concrete wall comes through a window that’s situated, bafflingly, at waist level. It’s likely the depression-era architects who designed this building thought no criminal should have the luxury of gazing at rolling clouds in comfort. But inmate 80008-135 doesn’t mind kneeling next to a steel toilet for his daily sky-watching sessions. It humbles him, kind of like praying might.

Echoed shouts of caged angst have just begun, signaling the arrival of another arduous morning. From his kneeling position, the inmate watches a Boeing 777 – he identified it when it passed at a lower altitude – draw a white trail up to a round patch of cirrocumulus clouds and create a design that resembles a seeding dandelion. After the plane passes, the flower’s puff ball slowly breaks and drifts apart. He could interpret this as a good omen if he wanted to, the inmate thinks. A symbol of new beginnings. And why not? It’s just as good an omen as anything else. He writes the observation down in his journal.

Prisoner 80008-135 has kept a sky-watching journal for the past three years, an attempt to convince himself that his days contain variation. But today, he enacts the ritual for the opposite reason; he craves its routine normalcy. Last night, without explanation or warning, an officer informed him he’d be moved to a new cell today. The erratic gusts of bureaucracy can flip your life upside down any time they want to, it seems. Even in prison, the only thing you can rely on is change.

He sighs as he reaches for his last piece of “convict cobbler,” a recipe he invented himself out of graham crackers, canned peaches and butter packets. The only items in his cell worth stealing are these canteen snacks. His job in the laundry pays well, $100 a month, and he’s amassed a king’s den of instant soup, refried beans, canned mackerel and Honey Buns. He likes cooking for himself (if you can call it cooking); the physical act of crumbling, seasoning, and toaster-oven baking creates a sense of wholesome tranquility and focuses his mind. He eyeballs what remains in his commissary box, deciding that tonight he shall feast on a casserole made from cocktail wieners, ramen noodles and crushed Doritos. Beats the heck out of that flavorless crap-on-a shingle they serve down in the chow hall, for sure. And he’d rather not socialize with those lowlifes anyway.

Prisoner 80008-135 barely identifies with the name the officer reads off the relocation list, as no one has called him by it in years. Everyone has a nickname here, and on his first day in, someone learned he’d sold insurance on the outside and started calling him “Geico”. He reckons it’s just about the worst prison nickname in the history of prison nicknames. Prisoner 80008-135 would rather have no name at all than be called Geico. A job is something you suffer through to pay the bills, and no man wants his suffering to define him.

Prisoner 80008-135 had a cellmate for the first two years of his incarceration. The other inmates called his cellmate Chief Swami “Chief” because he was a Native American dude and “Swami” because he used to perch cross-legged like a guru on the metal picnic tables in the yard. He would just sit there staring blank ahead while everyone else did pull-ups and played basketball. He would beat your ass if you interrupted him, too — he didn’t care if he got thrown in solitary for it. He liked solitary. That motherfucker was wise as all get out, the inmate thinks, and he could have really made something of his life on the outside. But the only thing Chief Swami ever made was a rope out of a trash can liner, which he then used to hang himself. That was the last time prisoner 80008-135 was forced to change cells. He’s lived alone in this cell for seven years.

This move feels strangely painful — almost physically jarring — like severing an imagined body part. He wonders how his eyes will adjust if the new cell’s walls aren’t this precise shade of dull green, like mint ice cream mixed with mud. He has memorized every stain on the ceiling above his bed. This one looks like a cross-eyed clown wielding an axe; that one looks like two beavers kissing.

The inmate pulls a dusty clip-on fan from beneath his bunk and re-wraps the cord in preparation for his impending move. The fan belonged to his old cellie, and he’s kept it all this time even though this cell has no place to clip it. Perhaps the next one will, he thinks. He’s kept a book Chief Swami left behind all those years ago, too. It’s one of only three books he owns that he will never trade away. Pleasant Sensations, it’s called. How to find Joy in Any Situation. He packs it in a pillow case along with the other two in his permanent collection, The Complete Illustrated Guide to Airplanes and A Beginner’s Cloud-watching Handbook.

Cell block five, the location of his new unit, is the oldest building in the prison — built 30 years before they even had electricity and plumbing here. He thinks he has it hard, man; those 1920s homies rotted and sweltered in pitch darkness. The three-story behemoth’s ashen bricks are seeped in a century and a half of loneliness and regret, and countless plausible ghost stories have played out in its musty hallways.

The new cell faces the top tier of the Ad Seg unit and looks down on the mini-yard below, so the inmate imagines he’ll kill the next few years people-watching instead of sky-watching. The cells will be smaller over there, too. Things built in the 1800s usually are. People were a lot smaller back then.

Inmate 80008-135 experiences an unpleasant sense of dread rising in his stomach, and he slows down his breathing to observe it. “Unpleasant dread,” he says to himself. It’s a technique he learned in Chief’ Swami’s book, naming feelings as they happen and recognizing whether they are pleasant or unpleasant. Your mind does that constantly anyway, the book says, about a million times every second. And when you slow down and pay attention, the unpleasant things aren’t as unpleasant as you thought. What causes suffering is the mental strain of trying to fight off the bad stuff and hold on to the good, the book says.

The Chief had underlined some things in that book right before he left, and the inmate now has those parts burned into his brain. External freedom is just an illusion. That line has three forceful underlines. It also has a bunch of stars and the word yes scrawled next to it in red ink. The only true freedom you can ever have is in your mind. Sometimes the inmate watches the corrections officers pacing up and down the hall. Those guys are just as trapped in here as I am, he thinks.

Sometimes when he re-reads Chief Swami’s book, inmate 80008-135 could swear he’s never experienced a true moment of freedom in his entire life. Not even when he was young and single, gunning his Harley Liberator up the coastal highway. Remembering how they found the Chief, he now wonders if his friend ever came to the same conclusion. There must be some brighter realization on the flipside in this damn book, he thinks. Maybe he’ll find it if he keeps reading. He might as well try. Lord knows he has nothing better to do.

It’s crucial to stay in the present moment, Chief Swami used to say. Inmate 80008-135 chooses not to think about his ex-wife, the one who made pottery and grew tomatoes out behind the home they thought they’d grow old in together. Or the twin daughters who inherited her cascading brown curls and excelled at karate when they were teenagers. Or the time he heard a rumor about an instructor at the karate studio molesting kids. Or the time he drove straight to the karate studio and broke that instructor’s neck – he didn’t mean to kill him – or how he proceeded to burn down an entire mini-mall to get rid of the evidence. It won’t do him any good to think about shit like that now. Nor will it be useful to recall how later he found out the whole molestation story was a damn lie. Or about how his wife filed for divorce two weeks after his conviction. Or about how his daughters haven’t visited him in ten years, how they say they don’t know him anymore…

Nope, thoughts like that won’t do anybody any good.

But the inmate also abstains from thinking about what his lawyer said the other day. About how she’s filed another appeal. About how she hopes to introduce the molestation story as a mitigating factor. About how if the appeal is successful, he might get a reduced sentence.

He bats those thoughts away like buzzing fruit flies on a rotting apple. Freedom’s just an illusion anyway, after all.

The guards walk the inmate in handcuffs past the Sensitive Needs Yard, where the high-profile death row inmates come out to run around in circles for exactly one short hour out of every 24. Since he knows no one can cut him with a shank here, he closes his eyes and watches the dancing orange spots caused by flickering flags in the sun. A soft temperate wind revives his weary, leathery cheeks.

They arrive at the cell, his new home. It is smaller than the old place, just as he thought it would be. Through the window, he can watch the interactions of the prisoners in the rec yard below. He starts to make a game out of imagining what they’re saying to each other. “I’ll fuck you up, bro. You wanna go right now? Let’s go. Try me.” As pointless as this pastime surely is, it has surprisingly decent entertainment value. He decides he will call his new game “Thug Life Theater.”

The inmate opens a fresh pack of ramen noodles and runs some cloudy water into his kettle. He bites into a moist Honey Bun and licks a flake of frosting from his coarse, white whiskers. There is a built-in shelf above his new bunk; he clamps the fan to it, angling a flurry of air at his sweat-drenched forehead. Lying back, he realizes he can catch a glimpse of sky from here after all. It’s only a small patch of blue, but he won’t have to kneel on a piss-stained floor to see it.