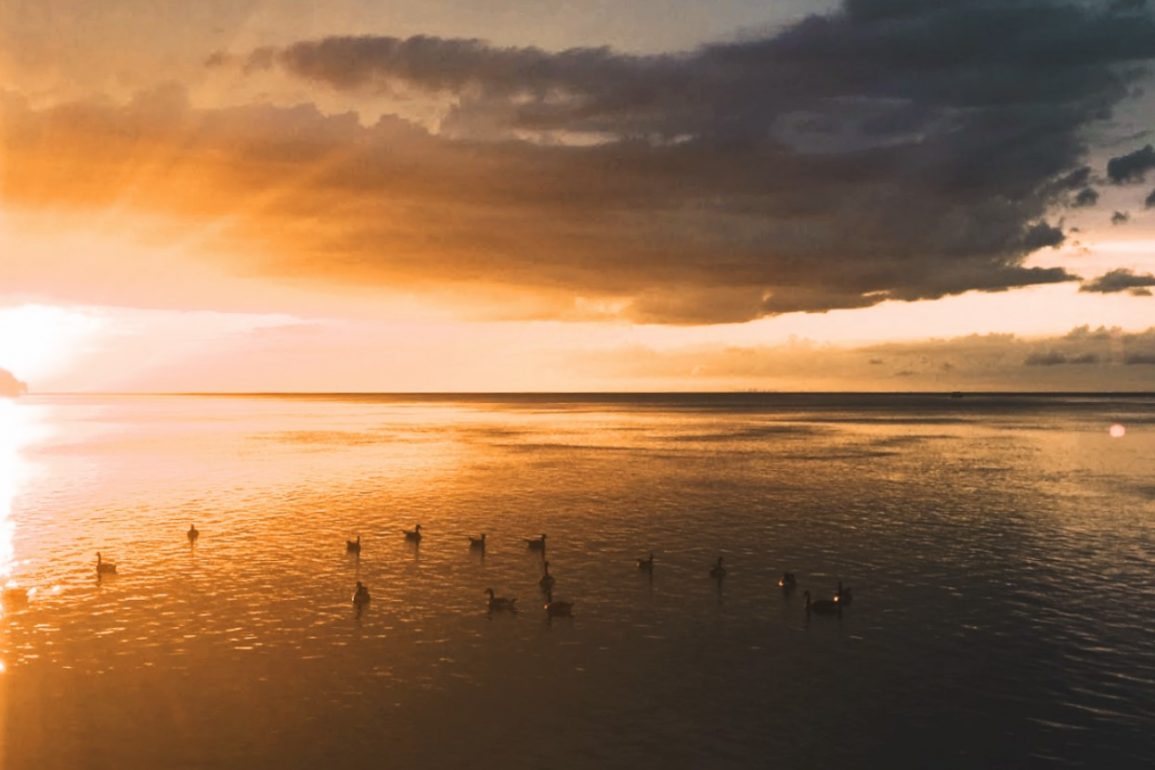 Your Rapunzel I Have Heard

The sun was clawing at the sky but falling, still, down with great slashes of colour that dripped into the moon, the sponge, while couples below waited, in the sand, for the end. Lovers, most of them, these couples, not sisters, but it makes no difference. A crystal multiplying on a string makes its structure known finally if you are patient.

There were cruise ships that night, mountains of ice, tectonic plates that scraped the harbour fore and aft, churning the sea, as well as its water, and when they passed one another on the horizon, at the rim of the bowl, from the beach they were not two or three or four ships but one huge glittering mountain, locked and unstoppable.

The girl with the crinkly hair pulled the girl with the secrets. Up. They walked on the border with their feet in the surf, the water cupping their ankles. Then calves. It is a sensation we love, don’t we, to have what is inside us, of us, outside and around us.

Water, said the girl with the crinkly hair, this much water is alright for you, but no more.

Yes, said the girl with the secrets.

I wish there were a way, thought the girl with the secrets, to seal myself.

Their parents weren’t at home but the girls had a key. One key to share and no corners to hide it in because their house was transparent, like a tidal pool, washed by the sun and clear, clear all the way down to the sand at the bottom. The birds flew over this pool with their heads down, examining. They perched on the skylights and windowsills with their heads up, watching.

Who watches you when you

To watch you for you

The girl with the secrets wished above all to sail but sail she could not because she might, they said, get lost. Or drowned. And, worse, who would know where she was when she was out there on the water, alone on herself? Herself.

This angered her. But.

There are schedules and routines. Patterns. I know you agree. It’s just easier to draw the thread along the line the pins have marked. The girl with the secrets had finished the introductory exams, the scarring, the initiations. She was progressing along the pin-line. Along the tented map where anger tumbles down from every side to vanish off the edges and so making it always there, you understand, the anger, but always not.

You will drown, they said, so instead of sailing she floated in the bath, the water warm and thick with pine branches and clay. She read books there, inside the water, inside herself. The pages crinkled in the steam. The words washed off. She turned the pages back and forth. A good book, you will learn this one day, a good book, one written properly, is a palindrome, it doesn’t matter front to back or back to front. And as our stories so are we.

I am falling apart, thought the girl with the secrets.

Her skull was rolling back, she was sure of it. She undid her too-tight braids but it didn’t help. Her skull was a little more open every day. And the tendons in her feet, she could feel them separating. As she walked — carefully — the bones spread and the viscous space between them shone, and shook. Any day now.

Falling apart, she thought, detaching into particulate matter and floating away like the head of a dandelion after it has died but seems, its puffy pollen all there, still alive. So you look away, trusting, but when the wind blows and you look back again there is nothing left, just a stalk that dries up and dies, too, for certain this time.

What is the colour of death? wondered the girl with the secrets. Have we each got our own colour that we die in?

One day, beneath the watchful glower of the birds, the girl with the secrets tried to light her house on fire.

It didn’t burn. The flames she birthed starved one by one. Gone.

She yanked out her hair and piled it, roots shining, on the top of the candelabra that the girl with the crinkly hair, who enjoyed a touch of glamour, liked to leave burning, ten candles in every window, and tried again, this time feeding the flames with her own self. The birds, outside and inside, watched as her hair, her heavy braids, melted and smoked and stained the glass, but that was all. There was no fire. The birds leaped into the air and circled the mirror house, the tidal pool house, they shrieked and moulted down at the girl with the secrets until her parents came home and beat her.

The chill deepened. It scored through the warm cherry heart of the day until snow fell on the beach and the surf grew ice crystals, impossibly cold on the flesh. Though why, the girl with the secrets wondered, when I am of the water even when it is ice, why can I not touch it. She set out bottles that were uncorked, that were baited, and she waited. For genii.

We are young, tiny, the first time our grandmothers pick us up.

The first time an uncle kisses our cheek.

So you forget but you also remember, which is to say: if you let it, it can be ordinary. If you remove the import from your hands — which in any case are given out, passed around, shaken, clenched, gripped, slapped; and they are dirty, too, most of the time, they do all the terrible things that we do, they do them first — you can make them, your hands, signify something else, make them like doves.

But first you must want to, and you must be met. And how often are we met, really.

We may confuse them, there is that risk. We may not know which side is our own self and which side is the Other, for the Others, if we do not have, as the girls I have called sisters had, a boy with a button-down shirt to put us straight.

In any case, luck came at last, a genie in her bottle, and the girl with the secrets met with Someone in the snow, on the beach, in a shelter meant for summer where there wouldn’t, she thought, be glass to watch through.

Someone said, my almond, my torrone, my marzipan, and what a change. A mountain of light. Not a seedy, sinking ship. She clung to Someone, thinking, I am an almond, I am sweet.

I will lock you away, Someone said, so you can be mine, only mine. I will give you a castle, mount you on a pedestal, set you in an aerie, because you are mine. My princess.

Your Rapunzel. I have heard this one before.

It was at this time, this sparkle-foggy time, that the girl with the secrets could not find her journal. She searched her drawers and saw they had been rearranged, her socks rolled into balls instead of folded. Outside on the shingles and the naked knobby branches there was rain, suddenly, sliding down and being drunk. Indiscriminately.

Perhaps, she thought, the genie had taken the journal — and everything it kept — and had drowned it. Perhaps her journal — and everything it kept — had gone free in the ocean. Perhaps it had gotten caught between the tectonic plates and been ground down into sand, which was not the worst thing, sand being another of our components, like water, only less so.

It is hard to know if you should trust more, or less, your components.

But no, the journal was not. Sand. She found it spread out, broken-spined, in the centre of the kitchen table, unable to move, the birds flocked around and over it, observing. Peering. Their beaks at the windows and at the skylights, scratching. Chattering. She put the journal back into the drawer where her socks, now that she was rolling them, were folded.

Little almond? laughed the girl with the crinkly hair. The claws of a bird scraped the window.

You are a glass that I scour every day so I can see, through you, and also see through you.

The girl with the secrets called for her parents, even screamed, but they did not answer, they were busy, or maybe they were not there. They had left a note saying, The Older One Is In Charge.

The girl with the secrets left, banging the door, the transparent door that did not lock, and went looking for Someone but where, she wondered, had Someone gone. It had been so long.

The snow was melting on the beach. The girl with the secrets collected her bottles, removed the bait, replaced the corks.

But do not think that is negative. No. It is easier to follow the pin-line. The crystal climbs up the string. Climbing and climbing until the girl with the secrets came across her parents. Finally.

They were at home, painting canvases at the kitchen table, painting shapes in bright permanent staining colours. She tried to give them one of her corked bottles but they laughed, said we have them already.

That day the girl with the secrets had a belly ache, she had left work early on account of it, but there was no space for her to sit down with them, her parents, so instead she bent over, bent over the ache, and said, I’ve been wanting to ask you, long wanting to know, if there is a line I can draw, or a line that exists, beyond which there is no other, only me, or even, ideally actually, no other even me?

As if, her mother sniffed, you aren’t a thing I created out of my own body, and her father laughed, and they continued painting the beautiful images that were, to the girl with the secrets, upside down.

Her belly ache was worse and worse, a heavy key jammed into her intestines, churning the meat, so she went for a walk on the beach. She tossed her bottles into the sea.

It was sunset. Torn and bloody membranes of clouds, which is to say water, lay across a glowering sky. The girl with the secrets walked alone. A whole, empty strand but she paced the margins with her feet, her ankles, her shins in the surf, in the soft bubbling foam that was of herself, of water.

The wind had been strong, it had smoothed the sand, almost levelled it right out of itself, out of sand and into glass, which is to say, into itself but otherwise. There were no footprints, not even those of birds, or crabs. It was a space where none might go, not even water, so when the girl with the secrets walked there she kept the edge, she kept the edge, she did not disturb the sand.