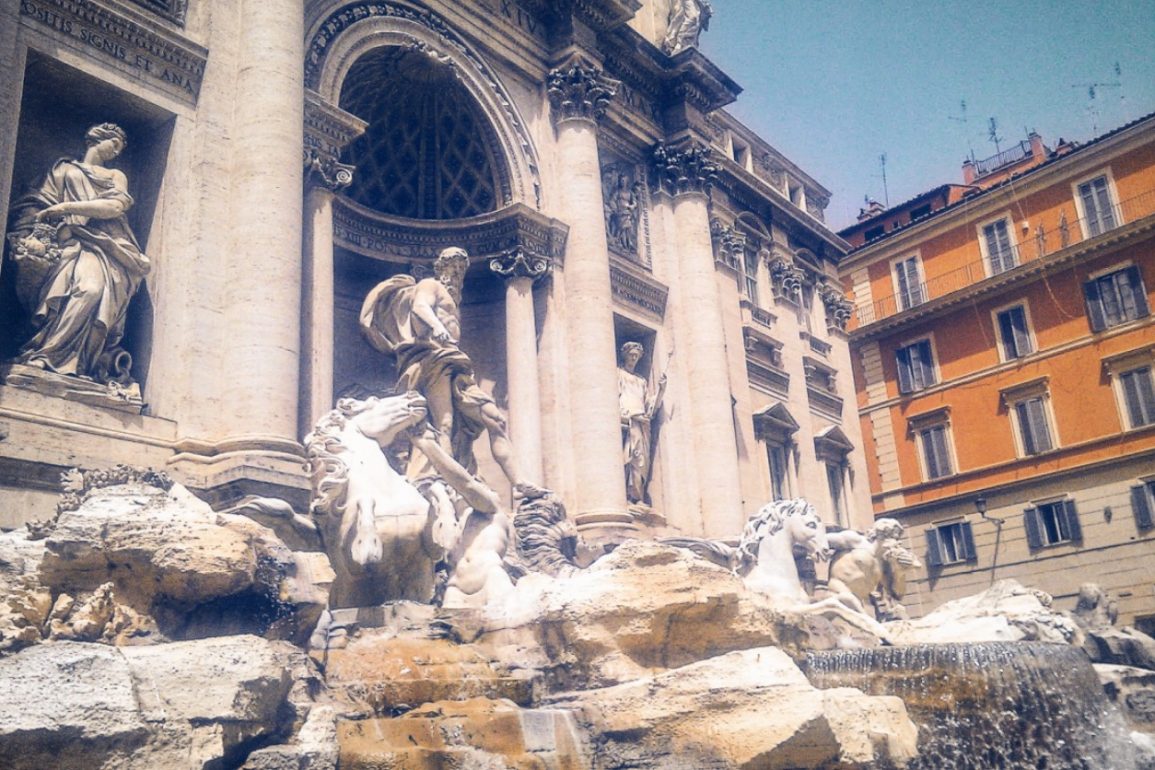 The team of dermatologists stand at the end of her bed, peering at her ravaged skin with benign expressions on their faces. They are leaning forward at an alarming angle. Maybe their shoes are filled with lead, Louise thinks. They are grounded and seem to move in unison. She definitely can’t see them flying anywhere.

There is mention of various discussions the team has undertaken to address the issue of her skin. The tone is one of slight annoyance – an unusual case, great lengths, special meetings. Options have been thrown about and the current avenue they are pursuing is the possible acquisition of copious amounts of olive oil from the local Italian delicatessen.

Italy. Louise remembers an Italian piazza she stood in once, the weather beatific, her skin brown and without a blemish. Not that it isn’t a nice day today. She can see a cloudless blue from her hospital bed six floors up. The harbour and the bridge are out there somewhere, but, as she is forced to stay in bed, she hasn’t seen them yet. Actually, she could have woken up anywhere. I mean, really, how did she know she was still in Sydney?

The ambulance picked her up in the middle of the night and she passed out soon afterwards. She only has the nurse’s word as to the name of the hospital. Her mother hasn’t been able to visit yet and her father is away.

One of the team steps forward and remarks pleasantly, “Of course, with your skin you can expect to be in and out of hospital for the rest of your life.” The smile remains on his face, as if anticipating a smile from her in return. She is bandaged within an inch of her life, except for the arm the nurse has just exposed. The nurse, that is, who has to wear a mask whenever she changes the dressings. To protect herself or her patient, Louise hasn’t quite worked out yet.

“Well, find me the nearest window and I’ll jump out.” The promise of even a two second glimpse of the bridge followed by oblivion suddenly seems like an appealing option.

One of the team shuffles a paper, another coughs but no one goes to close the sixth floor window. Of course she doesn’t actually mean right now. Not this instant. But soon when life really does become unbearable. It’s almost that now. Perhaps the next visit, she decides, which obviously the dermatologist thinks will be soon. Yes, the next visit.

No one says a thing. The nurse leaves first (after re-bandaging the arm) and the team follow. Hopefully they will get the olive oil soon. She can see the lovely Italian shop owner saying, “How many bottles?”

And then the peregrine tercel arrives through the open window. With a swift tucking in of feathers he lands on her moveable table and regards her with keen interest. He has a neat grey head, with round friendly eyes. His beak is yellow, his white breast speckled with grey and his legs and claws are also yellow.

Louise watches as he carefully grips the edge of the table. “I’ve seen you before!” she tells the bird.

“Of course you have,” the peregrine remarks.

“Aren’t you Will or was it Hugh or Bill that I saw in the Forest of Dean three years ago?” She pauses, remembering. “It was a wonderful display.”

“Oh that! Hugh loves to make a big show of taking off my hood and untying my jesses. But it is me that soars.” He preens himself for a moment. “My name is Will.”

“You looked wonderful soaring, Will. But what are you doing here?”

“You were thinking of me the other day,” the bird replies. “So I thought I’d pop in and reassure you.” The tercel pauses and leans his head towards her in sympathy. “Particularly in light of what has just been said.”

“No! Sheer speculation on his part and not very astute at all. No one has the right to take away another’s hope.” The peregrine straightens up and regards her with a more serious expression. There is a look about him now, particularly with his white flecked chest and grey head, of someone who knows exactly what they are talking about. “I can’t fly without hope. No one can.”

“To reach Australia, for instance?”

“Exactly! Rather a long flight but I must say, Sydney does winter rather well. Exquisite blue skies and the bridge glinting in the sunlight.”

The bird studies her carefully. “Don’t let anybody anticipate your flight paths. They have no idea where you are heading. For instance, you need to pop back and see me. Though not in July. It’s rather hectic with all the school kids. And anyway, you’ve got Italy.”

“Italy.” She pauses. “Yes, I think they’ve ordered all this oil.”

“You can lather yourself in it and dream of all the places you want to visit. Places you might have missed on your last trip.”

“Don’t let your skin imprison you. You can fly out of here.” The peregrine moves his wings slightly as if in demonstration.

“It’s easy,” the bird remarks. “Just think of where you want to go. Piazza San Marco. A coffee at Caffee Florian, say. The view from the very top of the Campanile is splendid.”

“Venice would be nice,” she says, feeling a little better at the thought. “I didn’t get to see Venice.”

“Well, there you are. And you must pop in and see my cousins in Bologna. At the San Petronio Basilica.”

“Is that the enormous church?”

“Yes, they’ve got a lot of room to move up there. And of course Piazza Maggiore is divine. Marvellous fountain.”

Louise thinks of Bologna. It was on her original itinerary but had to be scrapped.

“Don’t forget the Duomo in Florence. You did go, didn’t you? Not to be missed. You should see the brickwork of the Cupola up close. It’s amazing but slippery. A cousin had a close shave on one occasion.”

“It was raining when the tour visited Florence,” she admits. “And I decided to stay in the hotel…”

“And do some washing,” the bird finishes her sentence. Louise nods in answer.

How she would love to! “And to Rome too because I dropped some coins in the Trevi Fountain.”

“Did you? A little on the garish side but stunning at night.”

“That settles it. You need to return,” he tells her.

“I’ll have to start saving.” But, of course, she’d have to get better first. Go back to work and save really hard this time. Didn’t her mother say something about helping towards another trip? That was when her skin became really out of control.

All this time the peregrine has been studying her. As she runs through everything in her mind there is a flash of kind understanding from him and Louise watches as his feathers turn into a sleek, slate grey jacket. His eyes glint as if behind glasses.

“Now I must be going. Hugh will be wondering where I am.”

“You can’t fly straight back,” Louise says, not wanting him to leave.

“No, I’ll have a little break first. I thought I’d hang out on the rooftops for a while and take in the view.”

“It is a nice morning from what I can see.”

“And you had better get well, so you can see more.” Another ruffling of feathers and then the peregrine arcs up his wings into smooth semicircles. He gives her a reassuring nod and then glides across the hospital room and out the window toward the blue sky and the bridge, his ankle bells tinkling.

Louise is momentarily bereft until she notices a pencil and a writing pad on her bedside table. She is sure they were not there before and wonders who left them. She should make a list of all the places Will mentioned before she forgets.