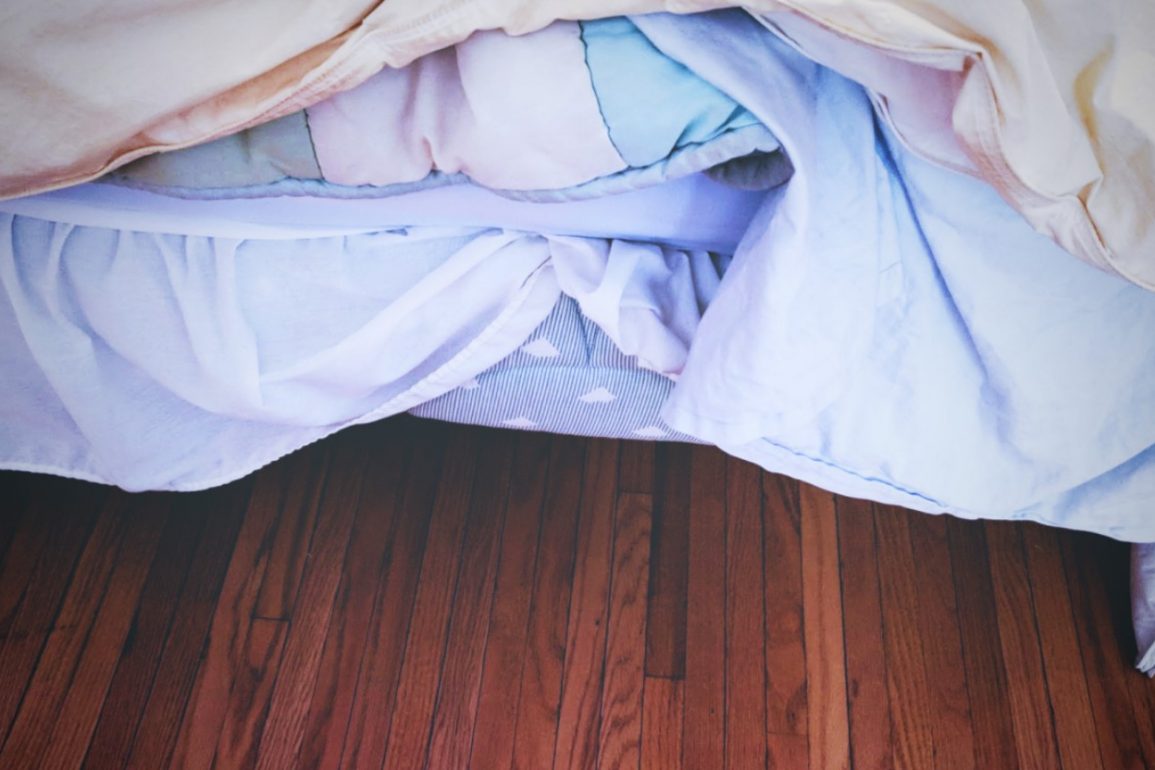 She fed it gum wrappers and used tampons.

Sure, this was odd, but it was an amicable arrangement.

The tampons, obviously, were for the blood, and Claire was glad it settled for this sludge rather than the fresh-moving blood she or her miniature Schnauzer could have provided. The gum wrappers she supposed were for the foil. It had eaten an aluminum take-out box of spaghetti when it moved in, and at the time Claire assumed it enjoyed the dark red of the meaty pasta, but now linking it to the gum wrappers it was probably for the metal.

She fed it twice a month, or whenever its stomach growled. It was no hassle.

Lou was over. Claire would show it to Lou, tonight. Because she loved him, and wanted him to move in with her, she thought he deserved to know.

“Long time no see,” said Lou when she returned to the kitchen.

He had one hand twirling an abandoned strand of linguini on his plate and the other limp at his side, allowing the dog to bump her nose against his skin. Claire stacked their dishes in the sink. She let the linguini strand slip off the plate for Nini. The dog quickly forgot her efforts to entice Lou’s attention and cleaned the floor.

“You did that on purpose,” Lou observed.

“Yep.” Claire placed a hardened crust of garlic bread in front of her little roommate.

Lou cracked his knuckles, one of Claire’s favorite sounds. “You were back there quite a long time. Feeling okay?”

The sink was filling with hot sudsy water, Claire up to her elbows, burning herself. This would be fine. Everything out in the open. How many nights had Lou spent wrapped around her and it lay still under the bed, uncomplaining? It would not object to Lou. And Lou loved Claire. He would not object to it. The thought brightened her and she turned off the tap.

Lou smiled, amused, and did as she asked. He knew his way around her kitchen. Claire kept a plastic bag of used sanitary products under the sink in her bathroom. She hoped, of everything, that Lou did not object to her hygiene practices, but he didn’t know what was in the bag as she took it to her room. He hummed the X-Files theme song as he followed her, holding the aluminum foil over his head like a space helmet.

Claire untied the plastic bag and added Lou’s foil. She knelt by her bed.

“Claire, what the hell’s in that?”

She folded her comforter onto her bed, revealing it under there, waiting patiently. It held out a hand, ever polite, and Claire gave it the bag. She waited while it sifted through the contents for the best morsel. It sampled here and there and gave her a pleasant nod.

Claire told Lou the story. She knelt there, too nervous to face him, and watched it eat while she told him about the night it came.

It had knocked on her door around 9:30. Not particularly loud; but with importance – a stately knock. Claire had been called to answer.

It stood behind the door, about waist height, barefoot in a tailored suit, with the appearance of a hungry child kept out of the sun. It had aged greatly since then; ten, twenty, maybe thirty years in the last week.

It told Claire, in plain terms, what it needed, how often, and where it should stay.

Lou squatted to look it in the eye. “And you agreed?”

“It wouldn’t hurt me,” Claire said.

It looked back at Lou from watery eyes, pink like a rabbit’s.

Claire knew he deserved full disclosure. “It did my hair once. And I gave it a bath the first night. I used to sing to it but I was hurting its ears.”

Lou wiggled his fingers under the bed curiously, and it obligingly grasped a pinky, just gently, and then let go. “Won’t it talk to me?” Lou asked, disappointed.

Claire pulled the comforter back down. “It probably needs to warm up to you.”

She took Lou’s hand and left the bedroom in darkness. It preferred lights to be out before midnight; Claire credited it with improving her sleep schedule. They stood together outside the door, listening to it munching on the aluminum foil and smooshy cotton tampons.

“I’ve never seen anything like it,” said Lou. “How long will it be here, you think?”

Lou heard the tenderness in her voice and leaned down for a soft kiss. “This is why I love you, babe,” he whispered.

Her head flushed with relief. Of course Lou understood. She had not doubted him.