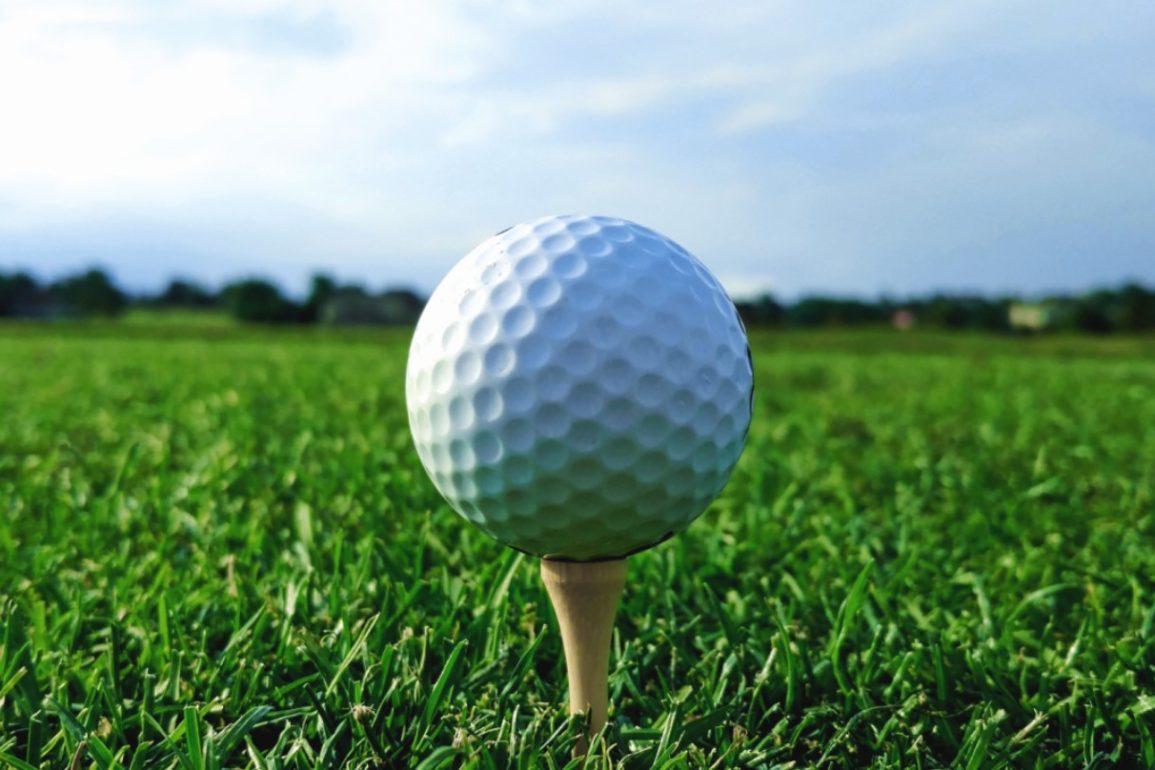 [ This photograph is in the public domain. ]
Bruce La Rue·
Short Fiction

I am a hacker. No one loves to play golf more than I do, but I am a hacker. It is prohibitively unlikely that Dan Wellum will ever be mistaken for Tiger Woods. If I make bogey, I am pleased. If I make par, I am elated. I do not remember how birdies make me feel.

Number seven is a medium distance par four with a slight dogleg to the right, steering the player toward number eight tee box, some thirty yards from the edge of the green. It is not unusual for some slice-opotamus to have to wait for players at number eight to tee off before chipping up to the green at seven. My second shot came up short and left of the green, leaving me a manageable little bump-and-run to get close and putt for par.

An older gentleman was about to tee off at number eight, so I stopped my pull cart to silence the rattling of clubs. I watched him swing, then resumed the trek to my ball. As I was setting up for my shot, I glanced beyond the flagstick and noticed the old guy on his hands and knees next to his golf cart. I dropped my club and ran over to him, by which time he had collapsed all the way to the ground. I found him unresponsive, and dialed 911 on my cell phone. I followed the instructions of the dispatcher until first responders arrived and took over. I could hear the urgent wail of a siren getting closer as other golfers wandered up to see what was going on. Despite the best efforts of the EMTs, the poor fellow was gone.

As the old soul was being loaded into the ambulance, the club pro asked if I would drive the cart back to the clubhouse for them and see to it the man’s clubs were brought inside for his family to collect when they came to retrieve his vehicle. I picked up the club the man had just used, a seven iron (golfers intuitively notice such things), and placed it in his bag.

I then drove to my ball, loaded my bag and pull-cart and headed back to number eight to retrieve the last ball that the recently deceased would ever hit. I pulled off the cart path and got out to look for the ball, unable to locate it in the Bermuda grass surrounding the green.

Golfers are hopeless optimists; it’s what makes us attempt stupid shots. So, just in case, I thought, better look in the hole. It was unlikely, but I had to check to be certain.

I walked onto the green, up to the hole, looked down, and smiled. Then I wept, quietly at first, then alternately sobbing and laughing uncontrollably.

Charlie Becker made the local newspaper twice on September 25th. On page 4A, his obituary mentioned that he was an avid golfer. On page 2C, the sports section:

“Charlie Becker recently scored a hole-in-one on the eighth hole at Seven Oaks. Becker aced the 155-yard par 3 with a seven-iron. Dan Wellum witnessed the feat.”

The visitation at Ingles Funeral Home was well attended. I signed the guest book and took my place in the receiving line. When I stood before the widow, I reached into my pants pocket and produced a golf ball.

“I’m the guy who was playing behind your husband,” I said. “I’m sorry for your loss, and I thought you might want this.”

“Thank you,” she replied, smiling weakly, her face tired from grief, lack of sleep, and the work that goes into laying a loved one to rest. “And thank you for being there to help.”

“Of course,” I said, and moved along toward the open casket.

I never knew Charlie Becker. Although I had seen him at the course a few times over the years, we never played together. Even so, there is a commonality among golfers, a sort of brotherhood. The level of talent may vary greatly, but a fierce adherence to etiquette is almost universal. Knowing what my wishes would be in this situation, I was quite certain Ol’ Charlie would want the same.

When I arrived at the casket I placed my left hand on the edge, shielding the cuff of my blazer with my right. The ball rolled out of my sleeve, landing softly and quietly just below Charlie’s elbow. As surreptitiously as possible, I tucked the ball a little deeper, nestled out of sight, pretending to adjust the satin lining of the casket, a nervous habit I have witnessed among well-wishers at times like this.

When I returned to my car, I tossed my jacket in the back seat and got in the driver’s side. Just for a moment, keys in hand, I wondered if I had done the right thing. I had placed a ball in the trembling palm of a grieving Mrs. Becker, and I had placed a ball in Charlie Becker’s casket. Each ball had the same information about the hole-in-one written with a permanent marker.

Proper ball placement is an important element of golf etiquette.