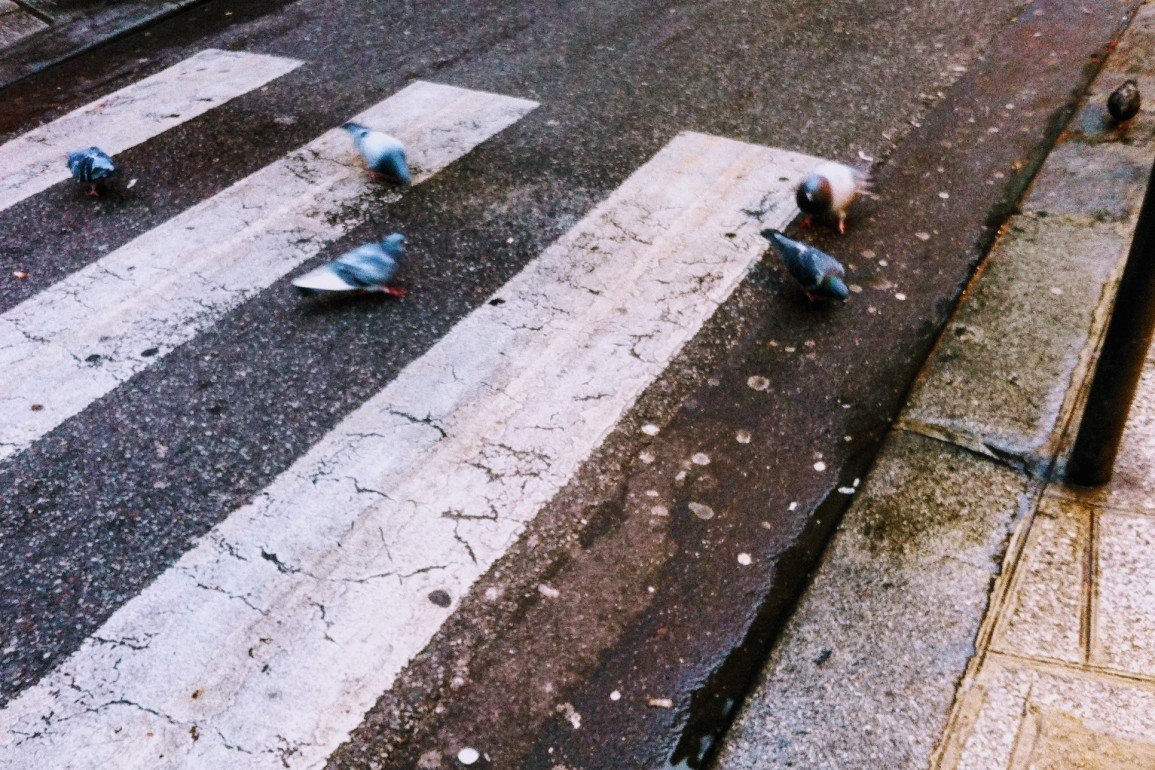 I leave the apartment around midnight in my full Elvis regalia. The fake belly is the worst part; the straps dig into my back, leaving marks that last for days. Once, I took a woman home from a bar who thought it was some form of self-flagellation—some type of ascetic scarring.

It’s windy, and it’s messing with my wig, so I hold it down with one hand as I attempt to hail a cab with the other. Most drivers ignore me. I’m used to it. It’s been hard to make it to my gigs on time after having my driver’s license suspended for repeat violations of reckless driving. I’d bike, but I’m not in good enough shape for that anymore.

Finally, a cab pulls over. I grab at the door handle, in case he’d been aiming for someone else, and get in. I tell the driver the name of the club, and he nods. Cigarette smoke has left a film of yellow on the windows, and as I slide into place to put on my seatbelt, I can feel the grease on the leather interior.

“You a fuckin’ clown or something?” the driver says.

He drives wordlessly the rest of the way to the club. When I get out, he tips his hat, and looks ahead, so I have to remind him about my change. He throws it at me, and veers away, letting the momentum of the car close the passenger door. It takes me a few minutes to dig the coins out of the muck near the gutter, and then I make my way in to the club.

I get stares as I fish out my I.D. for the bouncer.

“You’ll have to take of the glasses, sir,” he says. He’s smirking. I take off the aviators, hoping my eyes aren’t still as bloodshot as they’d been a few hours ago, and he waves me in. I put the aviators back on; for some reason I can see easier in the dark club through the tinted glass.

The show goes well—as well as they ever go. There’s a moment during Hard Luck that I forget the lyrics and have to improvise. After, “no, no, no,” I have to add three more “noes” and hope it goes over okay. No one seems to notice. I’m thankful. I’ve got a reputation to manage.

Once I get home, I call Lisa, because I don’t know who else to call. After some prodding, I get her to come over. I drink a couple glasses of Early Times while I wait for the knocker. My doorbell is busted. I make a note on my notepad to bother the landlord about it.

“Well, your place hasn’t gotten any cleaner,” she says when she arrives. “I don’t know how you live in this dump. Have you gained weight?”

“This is just a show belly,” I say as I unstrap it. It slides out from under my shirt onto the floor.

“Looks like you don’t need the fake belly anymore,” she says as she pats my stomach.

We undress and climb into bed. There are stacks of discarded clothes from earlier in the week, and she kicks them off onto the rug. One of my button-up shirts gets caught on her foot, and she has to shake it off. She tells me how red my eyes are.

I get up early in the morning to make a pot of coffee. There’s still a filter with wet grounds from the week before, and there’s mold in it. I pinch the edges, toss it in the trash, and brew a fresh pot. When it’s ready, I pour coffee into a mug with a giraffe on it for her and some into a pint glass for myself. I make a note on my notepad to buy more mugs.

She comes out of the bathroom in one of my robes and puts her hands on my shoulders, teasing me with a four second massage. “What are you doing,” she says.

“No, I mean…” She moves her hands around like a conductor, gesturing to the interior of my apartment.

We both drink our coffee in silence on the stoop outside the apartment building. There’s a squirrel carcass on the sidewalk I’ve been watching slowly decompose for a couple weeks. No one from the city has cleaned it up.

I hand Lisa my glass. She’s reading the paper and sits it on the step next to her feet without even looking up.

I try scooping the squirrel, but it’s stuck to the concrete. I pry it off, a piece at a time—it feels like a pile of shredded cardboard in my hands.

There’s a patch of soil around a tree in the sidewalk by my building. I dig a hole in the dry dirt with my hands, eventually getting it deep enough to place the remains at the bottom. Then I sprinkle the dirt back on top, and pat it so it’s tight.

I grab my glass of coffee and sit back down next to Lisa—the animal I’m so used to watching is now just a dark spot on the sidewalk.

I make a note on my notepad to buy an umbrella.