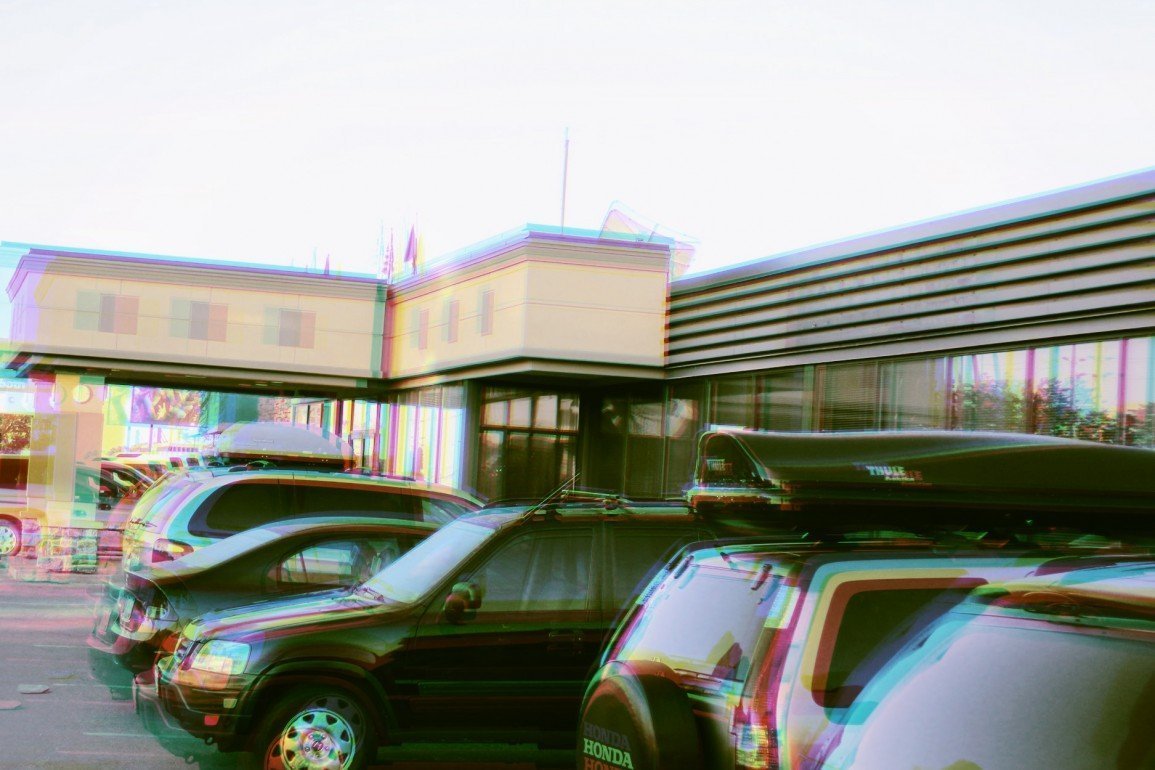 After nearly an hour’s search, nearly an hour walking up and down the rows and peering through the window of every red Ford Fiesta, he found his car. The ticket had been misprinted by a single letter, reading erroneously BE-7 rather than BF-7, and he’d searched nearly 2000 cars – 127 of them Ford Fiestas – before he’d realised his mistake.

He didn’t plan to complain. The thought of taking the shuttle bus back to the tiny clerk’s office was too much to bear. There was something vile about the room’s gleaming primary school decor. It was too bright, the colour of alarms. Something alien, too, about the smooth-faced attendant with his ill-fitting suit and yellow tie. And anyway, he seemed to remember the clerk telling him to check his parking code two weeks ago, before he’d left for Bruges. ‘For your peace of mind, sir,’ the clerk had said. ‘Mistakes do happen.’

There were a number of other people in the parking complex. Searching through the rows of cars, as baffled as he’d been. His experience must have been a common one. Now he had found his car, he feared losing it again.

Every Fiesta he’d looked in had a personality. Names, too, probably, but he didn’t know them. There were stickers in the windows of some, cartoon figures on the dashboards of others, Snoopy here, Captain America there. CDs scattered on the seats. Crumpled fast food wrappers. A brown and mouldering banana. An open magazine of hardcore pornography. A spare pair of mud-spattered work boots. A stuffed child’s lobster toy. The collar for someone’s dog. Each interior a miniature world, a self-contained ecosystem with its own rules and routines. CDs here. Change there. Wrapper here. Manuals, wheel nuts, ancient road atlases. A life in microcosm.

It was the end of the summer and when he’d finally reached his car he was sweating, aware of the beginnings of sunburn prickling on his forehead. He’d looked through the window of what he assumed to be just another red Ford Fiesta and then felt a jolt, a not-unpleasant feeling as though he’d been in a lift that had suddenly dropped three floors.

There was an obsolete tax disc in the bottom left hand corner of the windscreen. A pair of scuff marks on the passenger side mirror where it had been scraped years ago. On the front seat sat a CD. Bruce Springsteen, Live at the Agora Ballroom 1979. It was his car.

He’d let out a little chuckle, a noise of disbelief that, after all this time and all these cars, he had at last found his own. A sanctuary in this unforgiving world. He looked around at the others searching for their vehicles and shook his head. Moments ago he’d been just like them, but now he was back in control. He pressed the button on his key fob. The mirrors whirred outwards. The door lock clunked open. He opened the driver’s side door.

The temperature inside was stifling, as humid as if he’d just opened the oven. The smell – sweaty, ripe with the memories of farts and hastily-consumed fast food – was familiar, much like the scent of a lost partner. And yet there was something else there too, a smell he didn’t recognise, really just an undertone. It was earthy and rich. A kind of mouldering compost smell. It was not the aroma of oozing, discoloured fruit, or the sulphurous tang of mud-encrusted walking boots, or the mingled detritus of Rolo and Extra-Strong Mint, their union consummated into a sugary mess beneath the dashboard. It was not the piece of cheese, coasted in a still-tangy pickle, that he’d dropped down the back of the driver’s seat from a Boots Meal Deal months ago.

And then he saw the cup. It was a takeaway cup, beige with a maroon lid, from an expensive chain that he had never visited. The cup was crumpled slightly, the top curling over from a central crease, and had been shoved into the small pocket at the lower end of the driver’s side door where he kept his CDs. It was not his. It had not been there when he left the car, and even if it had, he would not have shoved it in that compartment anyway.

Which meant only one thing: somebody had been in his car.

He stared at the cup for a long time, stunned. Picked it up and turned it over in his hands. He no longer wanted to sit in the front seat. It was not that there would be evidence there, as though some crime had been committed and he believed the police would care enough to take swabs. But he felt violated. Someone had sat where he did, sipping their coffee, their hands on the steering wheel, comfortable in the leather seat, and had done – what, exactly? Watched the other lost souls searching for their cars? Turned on the radio, or listened to Bruce? Or just rested there, for a time. For a day, or three days, or a week, or even the whole fortnight he’d been away. There was no way to tell. Was there?

He glanced around the parking complex, looking for a security camera, a guard hut, something or someone who might have seen what happened, but there was nothing. Just row after row of cars, and people walking among them staring into the windows in search of their own. Nobody who would have looked for more than a moment at a man sitting in a red Ford Fiesta that was not his own, drinking a cup of coffee.

It seemed to him now that there was a faint indentation in the driver’s seat, the memory of the figure who had once been there. A patina of sweat, dried and glistening against the headrest.

A single droplet of coffee between where a man’s legs would have been, now a crusty, crystallised splotch. Now he could imagine his unexpected visitor. A refined version of himself. White tailored shirt, turned up to the elbow. Blonde hair tightly parted to the left. A handsome, slightly menacing face – angular cheekbones and strong, staring eyes. The model of success. Coffee in one hand, strolling down the rows of cars, trying the doors until he found one unlocked. A moment’s hesitation as the door opened, an awareness of his transgression. Then setting himself down in the front seat.

Uncomfortable for a moment, unfamiliar – the smell a challenge, the seat too far forward, his long legs crunched up. Perhaps he’d wondered then if he should turn back, if this was a mistake, but had settled instead, taken a deep breath. If anybody came, he could explain himself. There were dozens of red Ford Fiestas here. How foolish! He was in the wrong one. And yet nobody had come. So he’d sat, for days perhaps, coffee in hand, taking occasional sips long after it was cold. Savouring the silence and the peace and the sanctuary of another man’s life, the salvation offered by losing oneself. And then after a time, when he was content, he got up and left.

Standing in the sun with a crumpled coffee cup, the vehicle’s owner knew that something had been taken from him. But it would be six o’clock soon, and he couldn’t be charged for another day’s parking. That was out of the question. He would have to get in the car and drive home. And when he got in, and took the wheel, all he would be able to think was that the wheel was no longer his. He would wipe the headrest, but something of the other man would always remain. Another man had touched these handles, this dashboard, this Bruce Springsteen at the Agora Ballroom CD. He could spend forever wondering why, and never know. And he could get in the car and drive back home, but it was no longer his car. Nor would it ever again be.

Finally, at 5:50pm, ten minutes before he was charged again, he climbed in the car and adjusted the seat and reversed out of the space where his Fiesta had spent the past fortnight. He drove down the rows of cars and turned left and handed his ticket to the man in the glass booth who took it and wished him a good day with a look of apparently genuine happiness. And then he joined the motorway and began the long journey home.

He made it as far as Ashby Magna before tears prickled his eyes, and he flicked on his hazard lights and pulled off left onto the hard shoulder because he could no longer see the road. Nauseous, dizzy, he stumbled out of the car and stood weeping as the rhythmic orange light cascaded over him, wondering at how his life could have become so little, and have even that could have been taken away.

He wept for a long time, and finally, when the convulsions had subsided and his face was wet with tears, he walked round to the driver’s side door and removed the coffee cup from its place and stared at it for just a moment, and then hurled it as far as he could into the void beyond the light of his hazards. He sniffed, wiped away his tears with his sleeve, and climbed back into the driver’s seat to continue his journey into the night.