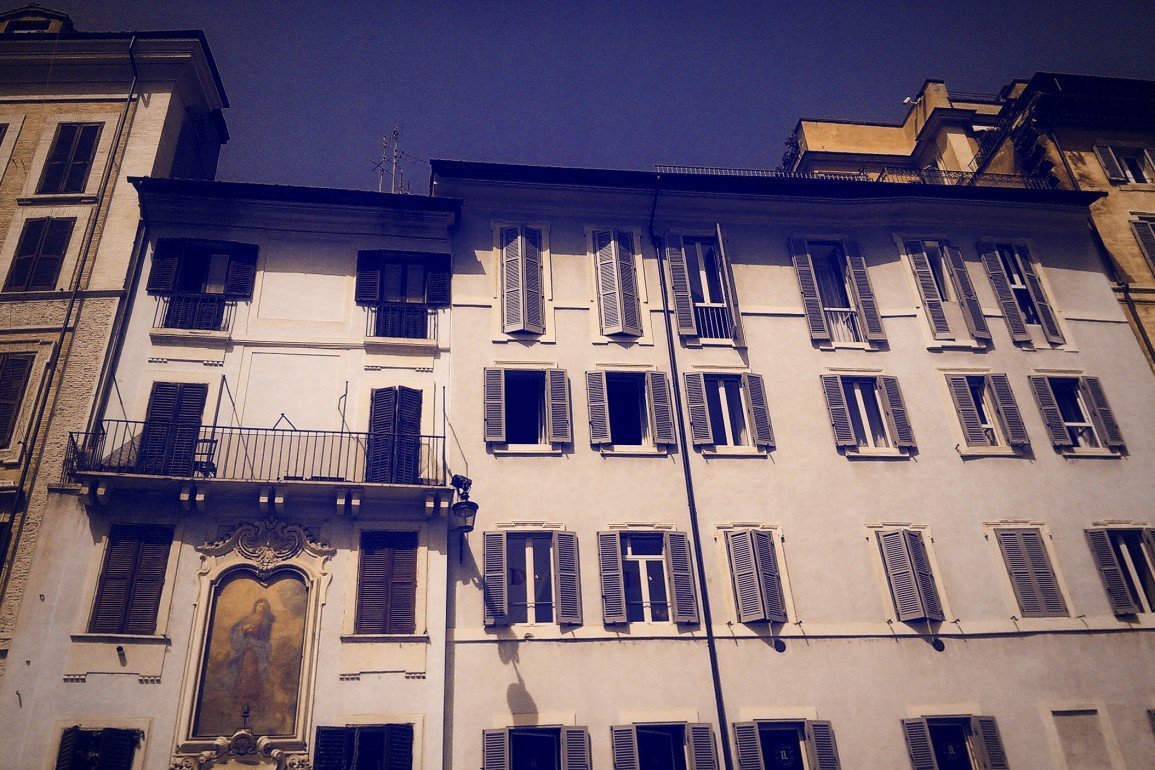 The photo shows a man, neither tall nor short, neither stout nor thin, in a pale blue button-up shirt. He is somewhat younger than middle-aged, but based on the receding hair line and gray at his temples and in his goatee, not that much younger. His tie is perfectly straight, but his eyes are half-closed. The silver top of a small belt buckle on his trousers glints. Because of the sun, there’s a reflection of the man’s face in the glass, like he’s staring at his doppelganger, or looking into his future self with a serious expression. A cleaned-off mahogany table beside him. On the walls behind him, some kind of wooden, built-in cupboard, doors closed. In his hands: a pink-and-blue vase.

The photo shows a little boy standing on a chair beside a giant potted plant. It’s the kind of plant grown in a greenhouse, with a finicky disposition that requires alternating hours of shade and sun. Lines of drool slip from the boy’s bottom lip. He wears a large t-shirt with a muscle-man decal on his chest. A handheld game swallows most of his face, just the tops of his eyes peep over the top. His mother looks too young to be a mother. Her hand rests on his shoulder. She has an eyebrow ring and seventeen rings between her ten fingers, all of them silver-plated, none of them with stones. With the hand not on the chair, she holds in place a green-and-white striped bath-towel to replicate the way the boy holds his game.

The woman’s lipstick is blue-black. Her bald head is sudsed with frothy white shampoo that drips down her shoulders and onto her swimsuit. It is a one-piece in banana yellow, with a zipper up the front. Her age is indeterminate, anywhere between thirty-five and sixty. Over her shoulder, the right arm and face of a stuffed panda, the kind given on Valentine’s or purchased as presents by guilty parents. Suds dampen the soft fluff of the panda. She does not move to clear them from her shoulders, torso, knees; she does not move to clear them from the overstuffed toy.

The photo shows a grandfather-type. He’s wearing jeans and a white t-shirt under a gray robe. The fuzzy orange cat, not much older than a kitten, nuzzles his chest. The man’s face shows gray stubble. His lips are thin and caught mid-motion. He is balancing a cellphone between his bony right shoulder because his arms are occupied with the feline. Is he cooing to the cat or talking to another human on the cell or both? Bookshelves overflow behind him. Dirty dishes are stacked on the table, including a large soup pot with the lid on. There’s an open tuna can near the head of the table.

Five people shoulder-to-shoulder. They are all the same height. Are they standing on something to accomplish this? Two face away, the first and fifth, while the middle three face forward. Who agreed on this pattern? They all wear navy-blue suit-coats with boxer shorts. The three facing the frame wear dark Ray Ban glasses so that their eyes aren’t visible. The three hold their hands up. The two on the ends hold their one arm down and their other arm straight out into air, like cyclists making signals. Who was the mastermind behind this configuration? Are they siblings? Two have red hair, but it could be dyed. Three have black curls. They’ve put a spotlight on the floor, illuminating up into their faces; they’ve dimmed the lights behind them, making a blank canvas.

A canary in a gold cage. The bird shuffles back and forth on a tiny swing. Its beak parted. It faces a large-screen monitor broadcasting a popular television puppet on a loop. Every twelve seconds the clip loops back to replay. The puppet is a man in a bird suit waving a wing feather and then the other. A woman dressed in a turtle suit does the Running Man. No human ever appears, either in the window or on the monitor.

The blinds are closed all but a foot. A giant sign written in red marker and taped to a clunky ’80s video-recorder reads: Smile! You are being recorded!

A couple stands facing each other. One holds a lemon meringue pie, the other holds a fork. The lemon meringue pie has great tufts of caramel-glazed sugar topping. The fork is the kind of utensil that’s made of wood. It’s oversize. The kind of decoration someone might inherit from a grandparent’s kitchen wall. The pie-holder pretends to fling the pie while the lover blinks and laughs. The fork is caught mid-fall.

A single arm peeps out from the persimmon-colored drapes. The arm is bare but veiny. There is no sleeve. It appears from the elbow down. The fingers form a fist. A lamp is lit in the background. A large gray dog with prescription glasses propped on his face sits on a plaid divan, gnawing a bone.

A college-age woman has an impossibly thin waist, like a wasp—perhaps she wears a corset or has in the past. She cycles through the five positions, holding none of them for more than a few seconds in a little black dress, ignoring instructions. She wears a silky pink beret. Her beret is a blur held in place with tiny silver bobby pins. The leg facing the window is a prosthetic.

Dear Resident: I am a professional photographer. I’m seeking participants from this building for a new series. If you care to take part, open your curtains at 4:15pm tomorrow, Saturday the 10th. Stand near the window. Do not move. Do not open the pane, or wave, or call into the street. You will not meet me, but you will be important to the project’s success. – Ms. Click-Click