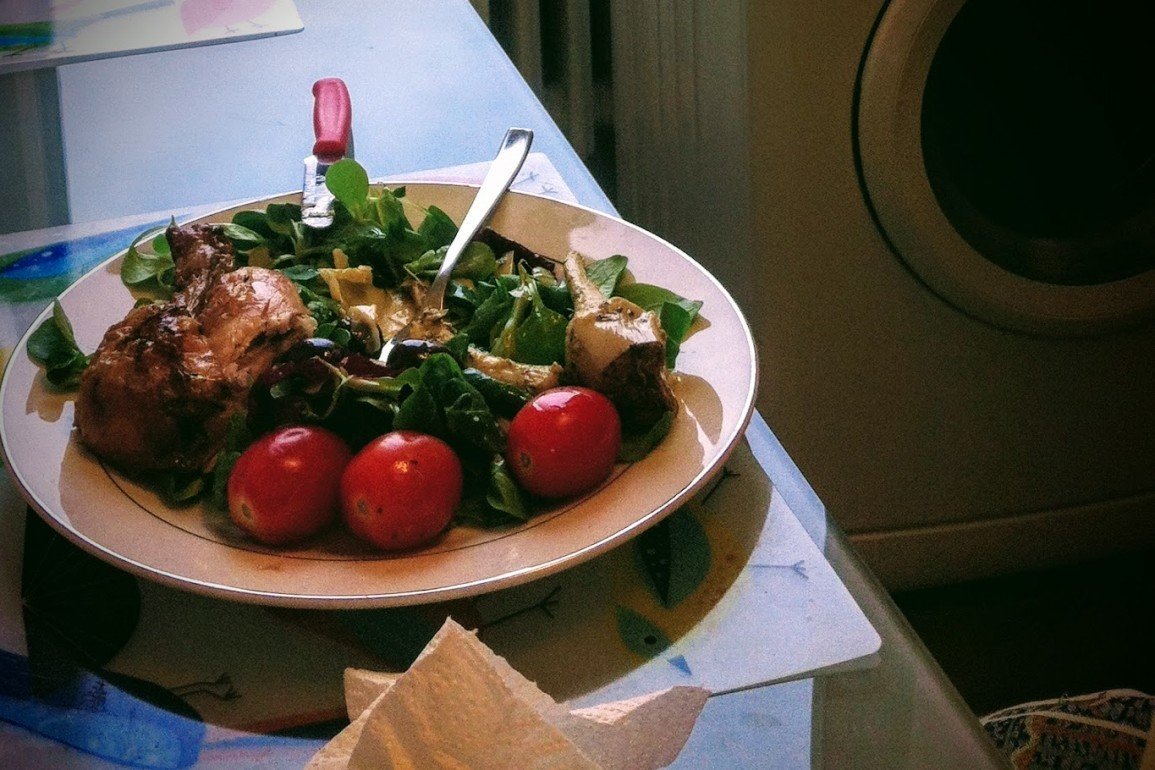 Momma liked to set the utensils around the plate, undisturbed by oiled fingerprints or dust. In the kitchen, I could see her bent over pulling the butterball turkey out of the oven; the faint sizzle of collected fat at the bottom of the pan made my mouth water. Momma steadily walked from the kitchen to the table and gently placed the turkey down. She removed her hand mitts and picked up the large knife sitting between the two burning candle sticks in the middle of the table. I could see the meat prong pierce the skin of the turkey and Momma’s gentle twisting of her wrist cut deeper into our meal.

“How was school today, my love?” Momma clamped the fallen piece of turkey meat with the utensils and laid it down on her plate.

“No.” She stabbed the turkey with the meat prong, placed the knife on the table, and looked at me. “It’s ‘I learned to divide,’ or ‘I learned about division.’”

“Yes, Momma,” I said. She picked the knife back up and continued cutting.

As she clamped the next chunk of turkey, the phone in the back of the kitchen rang. She put the utensils down, wiped her hands on the apron tied around her waist, and walked toward the wall where the phone sat. She cleared her throat and picked up the phone.

“Hello?” she asked in an upright tone. Momma studied the wall as the person on the other side spoke to her.

“Yes, he’s here.” Her eyes made their way to me and gave a quick smile in my direction.

She blinked a few times trying to comprehend what the person was saying.

“No, it was just a mistake.” Momma turned her back toward me and looked at the clock above the phone. She slouched herself and covered her mouth as she spoke into the receiver, faint whispers still making their way to me. “It’s not his time. I just got a new one yesterday.”

Momma dropped her free hand and coiled her fingers in the cord of the phone. Turning around, she looked at me, lips folded into her mouth while her eyelids quivered.

“And with your spirit,” she said. She placed the phone back on the receiver and inhaled through her nose. With both of her hands, she made sure her tightly curled hair stayed in place, gently patting the back of her head. She closed her eyes and exhaled through the small opening she made with her lips. Momma walked back to the kitchen table, picked up a few slivers of turkey, and placed it gently on my plate, tapping it twice with the knife before she walked to her seat.

Before she could answer I heard the front door open and two large men in pink jumpsuits entered. I looked at them and then at Momma, quietly cutting her turkey with the knife in her left hand and picking up the pieces with the fork in her right. The two men grabbed each arm and pulled me away from the table.

I screamed for Momma, vowel sounds resonating throughout the house. When my arms broke free, I fell face first onto the ground. The two men grabbed my legs while my finger-tips tried gripping the wooden floor. In front of me, I could still see Momma, her lips pursed together as the fork left her mouth.

A boy like me—same clothing, same haircut, same skin tone—opened the door leading in from the backyard and walked to my side of the table. He pulled the seat closer to the table, sat down, picked up my fork and knife, and began cutting away at the turkey slab.

“Today at school,” he said, looking at Momma. “We learned how to divide.”