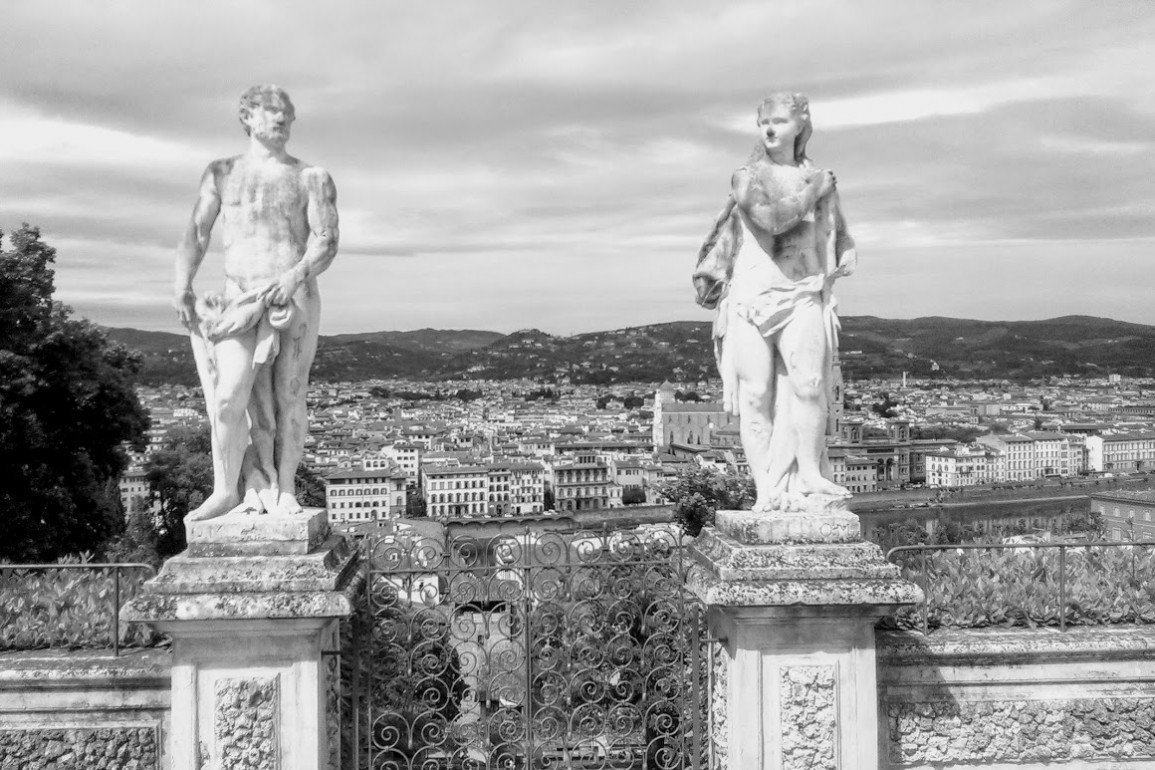 Kaylen was without a doubt the most beautiful woman in the world. This was not false pride, or hubris, or a colossal lack of humility on her part—neither was it delusion or psychosis or “subjective truth.” It was a quantifiable reality. Like most of her quantifiable attributes Kaylen had to grow into this beauty. It was a gradual kind of process. Over time, when she became cognizant of her Mesopotamian fertility goddess features, she adapted; she learned to mitigate and deemphasize her attractiveness in various situations, controlling her looks first with accessories, makeup, and dress, but also through sleight of hand, stagecraft, timing and gesture, choreographing her movements and using other people and objects as screens through which she glided as unnoticed as possible. Mostly, she hid in corners and shadowy chiaroscuro—at high school parties this could mean octagonal windows, piano benches, walk-in-closets, railroad kitchens—places where she could regroup and avoid the unavoidable gasp of some stranger or acquaintance or even friend she’d been hiding from for months just to forestall this exact reaction and the clinging, the small talk, the awestruck worship that inevitably followed.

Think about how difficult this was: every encounter, every errand, each time she filled up at the gas station, Kaylen was a source of mayhem and fanatical obeisance—think about the craned necks, the shopping carts crashing into pyramids of Nabisco Cheese Nibs, men unware that their gas tanks were filled, shooting gasoline over the trunks of their cars, even women (who weren’t immune either) stepping on their children’s feet, dropping whatever they were holding, spraying hose water as recklessly as the guys at the gas pumps.

In the worst cases, from what Kaylen knew, a typical male could be affected for an entire month. And even when the affected individual believed he had finally recovered, got his emotions under control, had regained belief in a rational universe and a secular god, had rejoined society and become once more a stable “wage-earner,” even when the lust and inertia and disappointment had more or less settled and given way to a jaded outlook that baffled only the man’s parents and Aunt Ruth or Betsy, even after three or four additional weeks with only mild relapses and nights of insomnia, and further bouts of catatonia and narcolepsy at the office or while driving up the Pennsylvania turnpike, even then it was impossible to efface Kaylen’s image completely, or forget the circumstances of her astral appearance.

Kaylen knew all about her effect on others. For the better part of ten years she had been warding it off. She had the special—in the sense of unique, not because she exactly enjoyed it—responsibility of shielding herself from the general public. Every day she went into the world—and this was increasingly rare nowadays—she was performing a public service but unlike, say, the job of trash collectors or utilities operators or average joes who perform “citizens’ arrests” on purse snatchers, Kaylen’s public service was completely unappreciated and unnoticed. That was the life of most beautiful woman on the planet. There was no glory, no renown like Kaylen had pictured for herself back when she believed she would become an inventor for Mattel or an Olympic gymnast—back then of course her beauty was in an embryonic state and Kaylen’s mother had not yet figured out how to manage and tame her shock of frizzy hair which tended to bushel around her face like the assemblage of sepals and petals to a coneflower. Nevertheless, even then, there was a marked quality about her which other children sensed and which made adults uncomfortable, though they could not explain why. However, in high school, having passed through the ephemerality of adolescence, the gangliness of pre-puberty, now wearing her hair in an Afro, Kaylen received her first taste of her beautiful curse.

It was after prom when her date succumbed to what the doctors later called a “vagal response” (the result of a smooth muscle tear), but which, in the moment, looked like a combination of fright and rapture when she removed her brassiere at 8205 Seminole Avenue and her unfortunate prom date took one look and fainted like a downed aspen.

Kaylen was much more careful after that. In college, thanks to a decade-long infatuation with black lights and lack of lighting in general (what could normally be interpreted as a campus-wide building flaw but which turned out to be serendipitous re: Kaylen) as well as a convenient access to mind-altering drugs, she was able to enjoy at least one or two untroubled romances, always one night stands. In class, she wore enormous tinted glasses so that even now her collegiate knowledge returned to her through a patina of topaz. By the end, it was impossible for Kaylen to go anywhere or do anything unless she was incognito and the friends that had glommed to her because of dormitory arrangements began to voice their concern that a) on the one hand, they would rather stare at Kaylen than do anything else let alone study their notes on Microbiology yet b) they were taking on a lot of debt to get an education and whereas c) they were in agreement that Kaylen was beyond beautiful, they also posited that d) having Kaylen around was roughly the same thing as experiencing a series of intense acid-flashbacks and finally e) to put it bluntly, Kaylen had to go because in all truth they were jealous of her because f) for one thing no human being should look like that and g) for another it was almost an insult to their common humanity for Kaylen to disgrace them simply by existing but h) hopefully, Kaylen could have a surgical operation to lessen/modify her godly radiance—perhaps equip her with bad teeth or a nose like a proboscis monkey—and give her an opportunity to participate in the world without the massive self-consciousness and fear her condition entailed. Through life, Kaylen could never claim more than one or two best friends. Her only stalwart these days was Beth Moroney from high school; this friendship worked by the mutual understanding that Beth would never actually see Kaylen ever again, they would only talk on the phone—Kaylen’s voice, insofar as physical attributes went, was within the realm of normal. That at least was a gift. It allowed her to enjoy the longest of her (not very long) romantic relationships—her relationship with Brent, who she met at a gala luncheon on the river.

At this luncheon Kaylen wore a straw hat, sunglasses, and a scarf; she didn’t go inside and she wouldn’t take anything off. Brent spoke to her with his eyes on her jawline. He was undaunted. Of all her potential boyfriends, Brent was the most intrepid, the most determined to push through and win Kaylen at all costs. On their second date, they went to a now-closed drive-in movie theater and on the fourth, Brent took her home. In order to avoid the embarrassment of her prom night all over again, Kaylen made Brent tie a bandana over his eyes before they made love—even so, his hands felt what his eyes couldn’t see, and it was too much for him: he went mildly insane. Over scones and Keurig coffee—Kaylen back in her sunglasses and a kerchief tied around her head like some rustic servant in a novel by Ivan Turgenev—Kaylen delineated the entire history of her ruinous beauty, the stigma attached to it, the danger of it, the maladies contingent upon it. Brent remained unfazed—to his credit, he was an actual brave man, not a pretend brave man. And they were together seven months. Seven months, Kaylen tells Beth now! It seemed like a long time yet it was only seven months, after all. And they worked so hard, around the house, in public—Brent joking that she was his leper lover when others got curious. At night, they had the bandana, until Brent begged for just one look at her elbow—her forearm—her thigh. “Uh oh,” Beth had said. She gave Kaylen her rendition of the “slippery slope” argument. It wouldn’t be long before he wanted a look at her neck and face, etc. etc.

Kaylen had never been a reckless lover. In order to do the public service she had done, keeping herself from scrambling the brains of total strangers or haunting old men’s final hours, she had practiced extraordinary discipline, became a true master of timing and gesture—screens and camouflage.

But sex is a difficult activity for camouflage, especially when the mask comes off. Brent spoke about marriage—a civil ceremony—a handful of guests—honeymoon in Florence—somewhere where women wore kerchiefs that disguised half their faces—perhaps Romania? Each night, Kaylen revealed a bit more of her body. She tried an exercise Beth recommended: she described her beauty beforehand to prepare Brent, trying to lessen the shock through poetic language. She tried to explain all of her beauty; hyperbole did not exist. Seven months—until finally, the day or rather night when Brent went too far. “I have to see you… I have to see you… I have to,” Kaylen narrated the whole sad story later to Beth who, to be fair, didn’t gloat or rub it in Kaylen’s face that this was precisely what she had predicted and could have told would happen from day one. This was a year ago now. Nowadays things are different. Kaylen doesn’t go outside much. She has a delivery service for her groceries. “It isn’t your fault,” Brent’s mom had said. “Myocardial infarction runs in our family.” Well, Kaylen could bless them at least for the excuses, excuses people make for the unexpected outcomes in life. Brent’s family was embarrassed by her. They were prim New Englanders descended from Pilgrims or something. They spoke to her without much eye contact, too ashamed of Brent’s demise in bed, eyes bulging and another part of his body bulging as well, unaware even that the woman they were addressing wore a kerchief and topaz-tinted glasses and failed to remove them during the entire memorial service at St. Paul’s Episcopal Church. When Kaylen left early they didn’t mind.